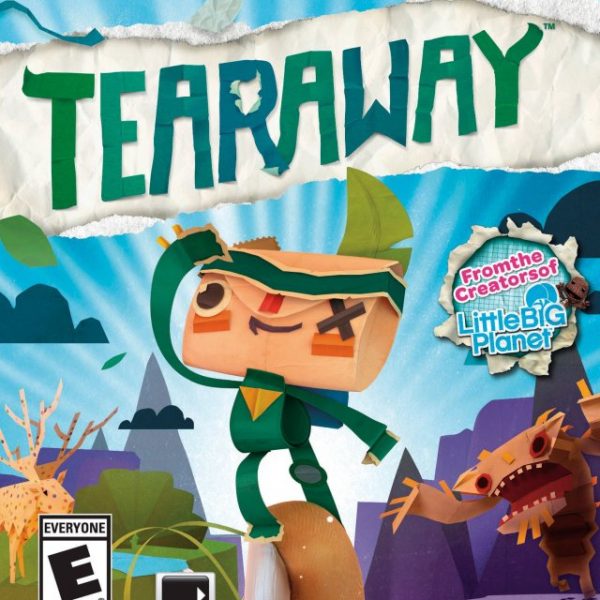 As of this writing, I have had the opportunity to play seven titles on my underrated PlayStation Vita. Not all of them have been hits, but I will be the first to say that I’m very happy that I decided to buy this system a few months ago. I got to go on an adventure with Adol, save a curry shop with Pupuru, and give Monokuma a swift kick in the furry butt. But, most of the games I have played haven’t been platforming adventure titles. So, I decided to attempt to change things up and check out a different sort of game that seemed to be unique and cute all at the same time. Tearaway, which comes from the creators of Little Big Planet, is an innocent looking game that has plenty of style, not very much substance, and way too much reliance on the Vita’s gimmicky features that make the game frustrating and hard to recommend to most gamers.

At the start of the game, you get introduced to the world of Tearaway as a, “You.” Yes, you are known as a You. Cute, right? As a You, you will have to guide a messenger through a world made only of paper and deliver a message. The messenger can be a male named Iota, or a female named Atoi. No matter which gender you pick, the plot is the same and you get to guide this little fellow or lady onward on an adventure through forests, deserts and even laboratories. Despite the Disney-Pixar like story, it doesn’t really “flow” the way it should. Two narrators who seem to come from Jamaica and London try to let you know what’s going on, but there really isn’t much story beyond the introduction. Sure, there are a variety of characters the messenger will meet, but they lack any significant contribution to the arc.

That said, Media Molecule isn’t a company built on thought-provoking narratives. No, they are a company built on style. As long as the game looks good, they’re happy campers, right? Well, they succeeded in Tearaway. This is a gorgeous, creative game that gets exemplified by the Vita’s screen. An entire world made of construction paper, newspaper, cardboard, film and any other type of pulp await you as you travel to creative locations and interact with a world that would likely killed a rainforest had it been made in real life. Seeing is believing with Tearaway, and the world in and of itself might be reason enough to at least give this game a quick look. Aside from the aesthetics, the music and sound are forgettable for the most part. The folks you meet have a funny sounding gibberish when they speak, but the charm wears out near the end of the quest. If you want, you can turn it off in the options menu.

The quest takes you across a variety of levels that require you to use your platforming skills and use your Vita’s capabilities. At the start of the game, your messenger can’t do much. In future stages, he will learn to jump, roll and use an accordion to solve puzzles. The enemies in this game are known as Scraps. You can pick them up, chuck them at each other, roll into them or use the environment to defeat them. Each level has a variety of stuff to collect that grants you this game’s currency: confetti. With confetti, you can buy new pieces of paper for your messenger and customize it to your liking. A major aspect of the game is the Vita’s camera. This lets you snap pictures and is often times needed to advance the story. Different types of film and lenses are available for you to buy with confetti.

So, like I said, you need to use both your platforming skills and the Vita’s features to get through the levels. I think that now is the time in this lovely review where I decide to mention that I find myself to be skilled as a gamer. I have slayed dragons in Demon’s Souls, saved what was left of the Oboro in Shinobi (PS2 version), and saved Dotnia from destruction without dying once. I think I have some skill as a gamer and have performed tasks that others wouldn’t dream of. Heck, I have been around since Mega Man’s earliest days when he had nothing more than the Mega Buster and a measly jump. But, I always found success in my action titles. Thus, you can imagine my frustration with Tearaway when my messenger falls off cliff after cliff…after cliff. Sometimes, I would find myself saying, “Ok, my fault. I know what to do.” More often, however, I would find myself saying, “Umm…I hit the jump button.” Or, “What the…I…I kind of landed on that…” Or, “YOU PIECE OF *beep* GAME I HIT THE *beep* BUTTON AND YOU *beep* DIDN’T DO WHAT I SAID!” The controls have a tendency to be unresponsive and it can be maddening. There aren’t any game overs or any collectibles that can be missed permanently, but that doesn’t make the frustration any less apparent.

Oh, but there is more, my dear friends. As you know, the Vita has two touch screens and a gyroscope. As luck would have it, all get used non-stop in Tearaway. The rear touch screen gets used to push objects away from the messenger and to bounce drums. Half of the time, they work like the should. The other half? Well, I’m sure you can guess what happens. The front touch screen gets used when you need to peel open pathways or open platforms. While these have more success, the sheer force you need to open some of the roads and doors requires you to smudge the Vita’s beautiful screen. Finally, the gyroscope. While not nearly as maddening as the rear touch screen, it adds another obnoxious gimmick. Seriously, game developers. There is nothing wrong with making a platforming adventure with just regular controls. Unnecessary frustration can be avoided due to a lack of “innovative control” -AND- due to the inclusion of responsive button inputs.

Despite all of the issues with the game play, finishing Tearaway takes only less than five hours. To earn the platinum trophy, you need to perform a few minor tasks and a few seemingly impossible tasks. Just remember that patience is a virtue and you will earn each trophy without too much sadness. In all honesty, earning everything doesn’t take as much time as one would think. It only took me a few extra hours of play time after the last level in order to achieve the platinum trophy and put Tearaway back on the shelf for good. The only reason I decided to earn the platinum was because I wanted to get the most from my money. And maybe because I’m a trophy snob. There’s nothing wrong with that, right? Did I mention I have the platinum to Star Ocean 4? Well, I do. Ok, ok. Seriously, folks, Tearaway is a platforming title I don’t recommend. Even if you enjoyed the adorable Sackboy and his antics in Little Big Planet, you are better off picking something else instead of Tearaway. I will always give a game props, kudos and anything else like it for creativity, which is something Tearaway has plenty of in terms of presentation. But, what fun is there is when you can’t enjoy exploring the creative presentation without meddling with the whacky controls? Not much, and in the end, I feel like Media Molecule gave me and my Vita a paper cut.