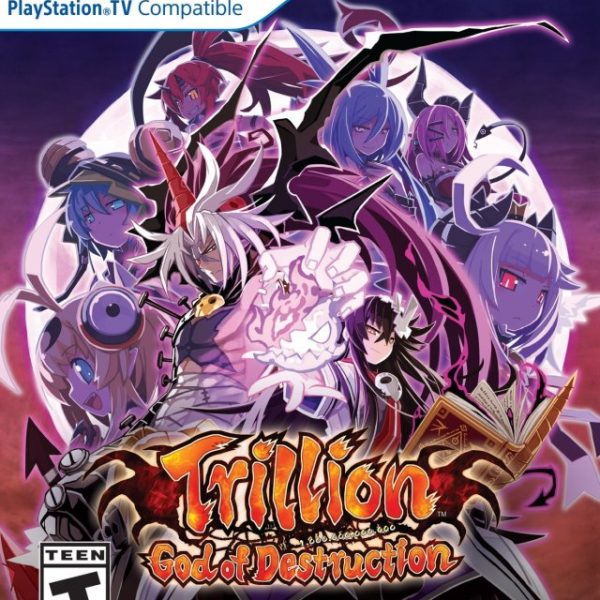 I went into Trillion: God of Destruction with very low expectations. In fact, the only reason I picked up this title was because the local game store marked it down to the price of a cheap meal. Even if the game had the same issues typically found in products from Idea Factory, it wouldn’t have been a total loss. Trillion surprised me during my first run, and it continues to surprise me as I go for the platinum trophy. Behind the zany, anime presentation and the tedious training, there is an emotional and heartfelt story. Trillion: God of Destruction is not going to win any game of the year awards, but it deserves a chance to be played.

Taking place in the underworld, Trillion’s story begins with a bang. On a day that seemed like any other, an unwelcome visitor descends to the underworld with one thing in mind: destruction. Zeabolos, the ruler of the underworld, is shocked when his soldiers and his brother, Astaroth, get demolished by this monster’s power. Zeabolos tries to take things into his own hands, only to end up in pieces. Barely clinging to life, Zeabolos vows to give up anything and everything if it meant this monster could perish. An otherworldly lady named Faust hears these pleas and grants him a second chance at life, but for a price. Faust reveals that the monster is made up of billions upon billions of curses, thus has been aptly nicknamed Trillion. Zeabolos tasks his six Demon Lords with defeating Trillion. The victor will become the new ruler of the underworld.

Faust knows more about Trillion than she’s letting on. The six Demon Lords, each representing one of the seven deadly sins, don’t realize how much is at stake. Zeabolos’ second chance at life comes at a terrible price. Sure, a good chunk of the story features comical interactions between the characters that have personalities as outlandish as their designs, but there are just as many sentimental moments that will appear when least expected. The further you get into the game, the more you see Zeabolos lament his decisions. The chemistry between the characters is already solid; watching them cope with loss and the thought of losing their home makes them easy to relate to.

Trillion: God of Destruction is divided into chapter. While the game can be finished before the final chapter by those that know what they’re doing, each of the game’s chapters are meant to be viewed to get the entire picture of Trillion. In each chapter, you have a Demon Lord that you need to train to defeat Trillion. You only have a certain amount of time before this battle, so it’s important to use your time wisely. Your Demon Lord has a variety of options available. Training lets you pick one of various activities that increase certain stats. Successful training will earn you a medal. Five of these medals can be used to enter the Valley of Swords to earn extra rewards and experience. The more you train, the more your fatigue bar will increase. It’s important to rest or alleviate the fatigue with items, or the Demon Lord could be injured. Aside from resting, you can increase the Demon Lord’s affection towards Zeabolos by interacting with them or giving them gifts. Affection is used as a monitor to see how the Demon Lord feels about Zeabolos. It also acts as a protective barrier to their hit points. At the blacksmith, you can upgrade the attack power of your Demon Lord’s weapon and outfit it with a variety of seals. Faust runs a research lab where you can purchase items and accessories. Other things you can do include asking for donations from the underworld’s citizens, participate in a drawing to earn gifts, and create minions that act as sacrifices for your Demon Lord.

You use the experience earned from training to increase your base statistics, learn passive skills and learn active skills. Each skill can be powered up to increase their effect. At the end of each week, you can participate in a mock Trillion battle with a wooden doll named Mokujin. These battles work as a barometer to see if you’re ready to face off against the mighty Trillion. During your time spent with the Demon Lord, various events will play. Some of these let you make choices that allow you to learn new abilities, add a huge boost to affection, or earn extra experience. Each Demon Lord has their own special events that adds some extra characterization to them. By the end of the cycle, there’s a chance you’ll know the Demon Lord as more than just another piece of fodder for Trillion.

Watching your trained Demon Lord go to battle with a variety of odd monsters is entertaining. Trillion’s battle system uses a rogue-like design. When you make an action with your character, the rest of the creatures on the field act at the same time. However, finishing off an enemy grants your Demon Lord an extra turn. In the Valley of Swords, the battle system is familiar as you go through randomly generated fields, fight monsters, pick up loot and earn experience. Battles against Trillion are slightly different. Trillion begins at the end of the battle field and slowly makes his way towards your Demon Lord. He can set traps from a distance, as well as summon his minions. An interesting mechanic is that he will preview his attack areas by color coding the grid on the battlefield. Most of Trillion’s attacks are enough to take out your Demon Lord in a few hits. This makes careful planning on the battlefield imperative. You will lose the battle if Trillion makes it to the opposite end of the battlefield or if the Demon Lord is killed. The latter is likely to happen, but you can weaken Trillion or power up the next Demon Lord with a final attack. The fights against Trillion are intense and rewarding. There are times the battles against him are unfair. With a generous save system, you can always try again.

The presentation in Trillion looks basic at a glance, but it works well on the Vita. The story events play out in typical, talking head fashion. However, the character art is well animated and varied. In battle, watching huge numbers appear from crazy looking attacks is a nice sight. There are some animated scenes thrown in for good measure, but I would have liked to have seen more. The voice acting is as solid as you’d come to expect. You can either select English or Japanese. Unfortunately, the music is nothing worth hearing again. You’ll get tired of hearing the same song over and over due to the limited selection.

Going into the game without any idea of what to do will mean a playthrough of 10 to 15 hours. A New Game Plus feature lets you participate in a Challenge Mode or start a new game with some carried over goods. With plenty of endings, as well as a True Ending, Trillion has plenty of replay ability. Trophy hunters like myself will have a fair amount of work cut out for them as they go for 100% completion. Trillion: God of Destruction is game that is full of surprises. Fans of Idea Factory’s niche style will enjoy it, but there is something that will appeal to other RPG fans. It might be the story, it might be the characters or it might be the game’s take on rogue-likes. No matter what it is, I recommend Trillion to any RPG fan.

Overall 7.75/10: Trillion: God of Destruction is another memorable, unique RPG experience on the Vita.