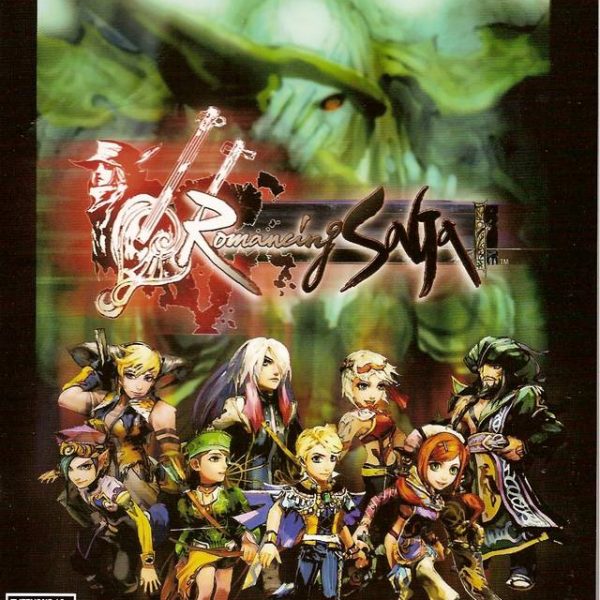 One of my biggest gripes about the video game players in the west is their close mindedness. This is especially true with “credible” (note the quotation marks with the word. This is my way of saying that I don’t find them credible at all. That’s a little trick I do for emphasis) video game websites and magazines. When we look at Romancing SaGa: Minstrel Song, we see that there is nothing but praise for it in Japan whereas here in the states, it has been torn to shreds by most mainstream reviewers. However, sites dedicated only towards RPGs are able to see Romancing SaGa’s true worth. This is a game meant for true fans of RPGs, but also for those who understand that there is more to the genre than going from point A to point B, obtaining a treasure containing a sacred item and returning it to point A. I’m not upset that The Uncredibles (zing!) didn’t like Romancing SaGa. I’m upset because they decided before hand not to like it because of the SaGa series having a style very different than what most know. If you want an RPG that gives you the freedom to play how you want, provides you with a challenge and allows you to partake in a battle system that keeps you on your toes, Romancing SaGa: Minstrel Song is for you.

The only thing that has some ground for the criticism is the style, so let’s just get this out there: this game took a questionable approach in design. I mean, the music is epic. Kenji Ito never disappoints when it comes to composition, and this is easily some of his best work. Even if you don’t much care for the game, you should at least hunt down the soundtrack. Next, the environments are vast, vibrant and vivid with a ton of places to visit. Monsters are some of the most unique I’ve seen in a game for quite some time. They range from chubby insects with armored shells to giant, imposing worms with venom spewing nostrils. And the attacks! Lord the attacks! The attacks you can perform with your party on one of these monsters are truly a sight to behold. I’ll go over those more when I discuss battles, but understand they are shiny and spectacular. However, all of this is hard to fully enjoy when you look at the characters. I—I can’t begin to describe them. Picture realistic heads, semi-realistic facial features, and mini-sized bodies. Then, picture odd outfits and hunched statures. That’s the best way to describe them and it can be really off putting for first time viewers. Eventually, you get used to it, but the SaGa artist Tomomi Kobyashi created gorgeous character sketches that would have had a lot more success than these…creatures.

Alright, alright. Enough of that. I just wanted to get the graphics out of the way because the rest of Romancing SaGa has an amazing amount of content to offer. It takes place in the world of Mardias, which was created by the god Marda. Many years ago, the god Elore waged a battle between three evil gods named Saurin, Death and Shirach. Death and Shirach eventually fell, but Saurin didn’t go so easily. With the aid of the hero, Mirsa, Saurin’s power was sealed in ten crystals called Fatestones. Now, the Fatestones are scattered throughout Mardias and only a select few are able to stop the resurrection of Saurin by obtaining the Fatestones for themselves. The premise of this journey sounds familiar, but you have to keep in mind that this is a true-blue SaGa title. This means you start by picking one of eight characters, finishing their introductory quests, and then exploring the vast, open-ended world of Mardias. You’ll get to stop pirates, slay dragons, help miners and assist gods. However, you’ll do all of this on your own terms, at your own pace and at your leisure. You unlock the world of Mardias as you meet new people in taverns, towns and dungeons. As more places open up, so do more quests that, again, you can finish when you feel like. Granted, some of these quests can expire, but most of them remain open for a long time. Romancing SaGa lets you play the way you want and, like a good SaGa game, let’s you recruit a wide variety of characters.

These characters have their own strengths and weaknesses, but you can build them as you see fit. For instance, if you wanted to make Sif, a female barbarian with high HP and defense a magic user, you could if you put the work into it. You can buy a variety of equipment at shops if you have the funds, which are predictably limited in this game. Money also lets you purchase new spells and acquire new proficiencies. The other form of currency, jewels, allows you to upgrade character’s traits ranging from weapon affinity to proficiencies. Proficiencies allow characters to jump, climb, find chests, find traps, and other helpful things that will be of great use in the huge plethora of dungeons available to you. Of course, there is even more that you can do. You can head to a blacksmith to improve a weapon, seek out a martial arts master to improve your ability when it comes to fighting with no weapons, and you can create spells when your affinity for a certain type of magic is high enough. In the event you ever forget something, each town has a member of the Volunteer Brigade to assist you with the many features of the game. These rambunctious scamps also help you keep up with a hidden statistic in the game called your Event Ranking. This indicates when you can and cannot activate certain quests. While you can’t get a numerical value of it, the Volunteer Brigade can give you a good idea on where you stand.

However, battles will give you a clearer picture on this sort of thing. Romancing SaGa will increase the strength and fierceness of your foes as your party grows in ability and power. Monsters on the world map or in dungeons will charge at you with blinding speed, which can get annoying when you want to exit a dungeon. When you touch one, a battle begins. If there are foes within close proximity of each other, a chain battle begins. This means that after the foes from the first set are gone, another battle begins immediately after. If you played any of the previous SaGa titles with the exception of Unlimited, then battles will feel familiar. You begin by selecting an action for your characters, and then the battles unfold with members having higher agility going first. The typical HP and LP are back, along with BP and DP. HP, your hit points, keep you standing in battle. When they are gone, you fall. LP are your life points. When these are gone, the character is removed from battle permanently. So, watch out for those. BP refers to battle points, which allow you to use special attacks. The more powerful the attack, the more BP. BP gets recovered at the start of each round at a fixed rate. DP refers to durability points. Weapons will break when DP reaches zero, but most can be restored by sleeping at an inn. While the amount of fights in a dungeon can get demanding, the fun rarely stops. This is especially true when you witness a combo, or a stronger version of a combo called a Vortex. As per usual, skills are learned via “Sparking.” This means that, after enough practice with a weapon, a character will learn a new technique and use it right away. The end of the battle will mean an increase in various stats for each of your characters, as well as some Jewels, money and maybe an item or two.

Most of this stuff has been traditional for the SaGa series, and one more thing needs to be mentioned: the difficulty. Romancing SaGa is a difficult game in that you have to maintain your resources, use your limited money wisely, and always save when entering a new area. Monsters will grow in strength faster than you think, and most bosses are usually five times as brutal as regular foes. That said, the challenge is one that is rewarding to overcome. Whereas in Unlimited Saga the challenge was just a frustrating mess, Romancing SaGa has a challenge that makes you feel accomplished after fulfilling a tough objective. Each character usually takes about 40 hours to finish, and that’s not including completing all of the quests. As you can see, I highly recommend Romancing SaGa: Minstrel Song to anyone seeking a solid, true-blue RPG. Unlike the stuff most are used to, you’ll quickly learn that Romancing SaGa gives you guidance in terms of how the game plays, but not how to play the game. Confused? Well, that’s what you get for trying a SaGa game. Remember, this series has had a history of being considered Square’s black sheep of the family because it does away with conventions and lets you play as you like. Don’t let this deter your from trying it, though. This is a very enjoyable game that happens to be different. With eight characters and a huge amount of quests, you can save the world differently every time. If you want a title that is challenging, open ended and has plenty of customize, I say look no further than the Playstation 2 remake of Romancing SaGa.