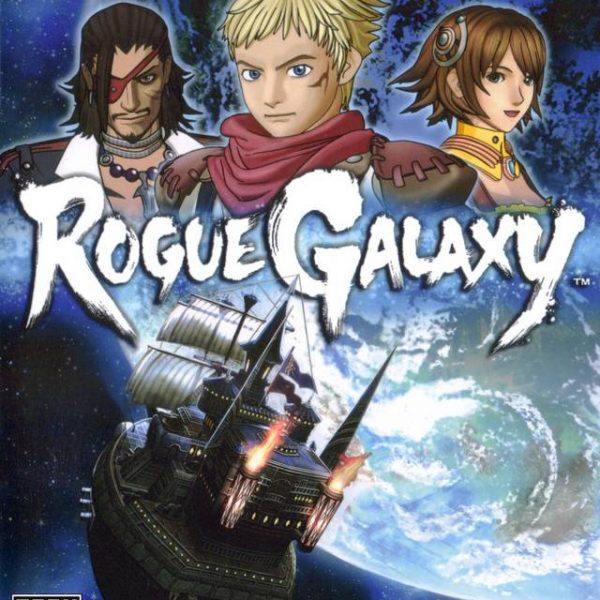 Author’s Note: This review was originally published on April 17th, 2007.

Only a few games have managed to drain over 90 hours of my life. SaGa Frontier, Disgaea, and Mega Man X4 are three games that have individually taken hours upon hours of my game time. The latest game to add to this mix is Rogue Galaxy. This Level-5 created game can easily be finished in 30 hours, but if you want to get everything, you’ll be looking at close to 100 hours. Was this time well spent?

The story, as mentioned, can take up to 30 hours. Rogue Galaxy puts you in control of 17 year old Jaster Rogue. After an excursion on his desert planet Rosa, Jaster begins a fight for survival in town due to a beast invasion. With the help of a mysterious man who grants him a powerful sword, Jaster gets mixed up for someone else and is recruited by two pirate lackeys to go on a space-age adventure. With the promise for excitement, treasure, and the exploration of new planets, Jaster begins his quest as a space pirate.

I knew from the start that this game wouldn’t have a complicated plot. After a few hours into it, I realized there was some hidden secret about each of the characters on your team. Obviously, Jaster has a hidden secret of his own that most likely holds the entire fate of the galaxy in his hands. RG has been compared to Skies of Arcadia due to it’s space setting and the constant travel through the skies. I wish this were the case, because the characters in SoA were endearing, whereas the majority of the characters in RG were not. I’m not saying all of them are boring, because Lilika Rhyza is one of the coolest characters in RPG history. Space travel is an interesting concept, but if you put it together with a trite plot, you easily forget that you’re soaring through a solar system.

However, Rogue Galaxy’s main focus is on exploration, space travel, and adventuring. There are a variety of unique planets which you’ll encounter. Each planet has it’s own distinct culture, setting, and secrets. You will spend most of your time running from Point A to Point B. A red arrow will direct you where to go next, thus this game follows a linear approach. Each planet has a plethora of NPCs for your to converse with, but I saw no need to do this. One thing that was a great idea were the vast amount of save points in the areas. When you step on one, not only do you get full recovery, but you are also able to teleport to other save spots that you have visited. This makes traveling very easy, so you don’t have to constantly run around. Believe me, there is plenty of running to do and this feature makes the game a bit less time consuming. Another great feature is the lack of load times for when you enter and exit a house, shop, or church.

In various areas, you will encounter enemies. This is where the battle system enters the fray. Rogue Galaxy is an action-RPG. As you travel, you’ll hear the sound of an alarm and a group of enemies will appear right in front of you. No matter who you control, your characters have a main weapon and a sub-weapon. The main weapon is typically melee, and the sub-weapon has long-range abilities. As you fight with these, a meter will drain. When the meter is empty, you need to rest to recover your energy so you can begin fighting again. However, there are other things you can do during this period. You can pick up a pot, a boulder, or even an enemy and chuck it at a foe for some damage. You can dodge by doing a back flip, or you can guard from their attacks. This action meter may seem like a downer, but it makes little difference in the battles. Your sub-weapon also has a meter. If you continue to use it, then it will run out of ammo and you’ll have to let it recharge.

For the majority of the game, it’s best to use Jaster, but there are times when it is fun to change up your controlled character. Each character has their own unique set of abilities, support skills, and spells. Because battles can get so hectic, you will often times have your AI controlled characters issue suggestions in case someone needs healing or they want to use an attack spell. Some enemies have barriers, and others need to be stepped on. There is plenty of variety, but by using the aforementioned spells and skills, battles can be finished in a matter of seconds. With plenty of save points around, you’ll rarely have to worry about running out of magic power. There is no healing spell in this game, but this comes as no trouble. Money is not a problem, so you can buy as many potions as needed. However, certain vendors only carry a set amount of supplies so plan accordingly.

Sometimes, you’ll be given notice that a battle has a challenge for you. If you complete the challenge, you are awarded one Hunter Coin. These coins can be exchanged for a special license which allows you to buy items at a cheaper price, as well as access rare items.

Going back to the skills, the way they are learned happens to be one of the most fun ways I’ve seen in an RPG. The skills are learned via the Revelation Flow Chart. By setting items in empty slots on the chart, you will learn new skills. Some items cannot be obtained until late in the game, so it will take the entire game period to learn everything. One special skill is called the Burning Strike. As you continue to attack enemies, you can pick up blue orbs called Burning Chips. When yet another meter is filled, pressing R1 and Square will cause your character to begin the Burning Strike. By pressing certain buttons with the correct timing, huge damage can be issued. Unfortunately, these cannot be used on bosses.

As you can see, the battles were by far the highlight of the game. If I was getting ready to finish up the game, a quick spell would easily clear the room of enemies. However, if you want a challenge, using no skills is the way to go. The action is always intense but, the majority of regular and boss fights were easy.

When there is fighting and exploring, there is plenty to see. Rogue Galaxy has some gorgeous cel-shaded graphics the bring this galaxy to life. Luscious forests and jungles, highly detailed ships, and a variety of colorful enemies await you. But, since you are in dungeons for the majority of the game, you can easily get sick of them after a few hours. Then again, you’ll probably even more sick of the music after a few hours. Some tracks, especially on Rosa, were great. The battle tune was also one of my favorites. Other than that, get that volume down button ready. Just be sure to turn it up during the voiced story events. All of Rogue Galaxy was voice acted, and each VA did a wonderful job of giving the characters more (and needed) life.

So, up to this point, I’ve covered all the basics, save one important detail. What is it that you do when you’re not moving the story forward? The answer is side-questing. My goddess, this game is basically composed of nothing but side-quests! By completing everything this game has to offer, you’ll be out 100 hours of your life. At one point in the game, you’ll meet the ever-annoying MIO, who keeps track of all that you need to do. Your reward for these mindless tasks? New outfits for your characters, which are the only things that carry over in the new game plus. This is not to say that some side quests weren’t fun. Finding rare monster bosses, creating brand new items in your own factory, combining weapons to produce more powerful weapons, and finishing the Revelation Flow Chart were not only rewarding, they were fun to do. As expected, they take the entire course of the game.

But, Level-5 decided to not stop there, and added even more side quests that lack any reward. First, you have the Insectron. Remember the Chocobos back in Final Fantasy VII? Ok, think of that, only with bugs that battle each other. You have to raise these little critters, feed them, breed them, train them, and keep them happy so they can compete in a tournament. If that sounds fun to you, then I wish you the best. I found the Insectron to be tedious, and based too heavily on luck. However, the most time consuming and challenging quest (which I happened to finish so none of you can say I’m a quitter) is to fight a certain number of each beast. This wouldn’t be bad, but you have to take into account that many beasts are rare, have scattered locations, and their appearance rate changes as you complete each story chapter. So, unless you spend hours on end in the same area, in the same chapter, looking for the same enemy, you’ll have a very difficult time finishing this side quest. Sure, the extra experience is nice, but remember, this game is easy enough.

The side quest portion of the game is the basis behind my review tagline. More is less, because if you’re a perfectionist, then you’re going to be spending a lot of time on this game. I think that Level-5 could have nixed the Insectron and the monster quotas, as well as a few other small things. Overall, Rogue Galaxy was not rewarding to complete. It’s not because the story was cliche, but because completing it means doing too much extra. It felt like I was playing a collection of mini-games, not an RPG with a few sub-quests thrown in the mix. The RPG genre should never be like that, and the rewards to be reaped from this were not enough. New outfits are fun, but by the time you finish them, you will have already finished the game. Will you really want to start a new file? I see no point in doing this because you will have already done the majority of everything Rogue Galaxy has to offer: side-quests.

Well, that about covers it. Rogue Galaxy’s hugest flaw is in it’s side quest department. More is less, remember that. However, if you are not worried about getting everything, you’ll be in for an easy adventure with a great battle system. If this sounds like your cup of tea, then hop on your pirate space ship and pick up Rogue Galaxy.