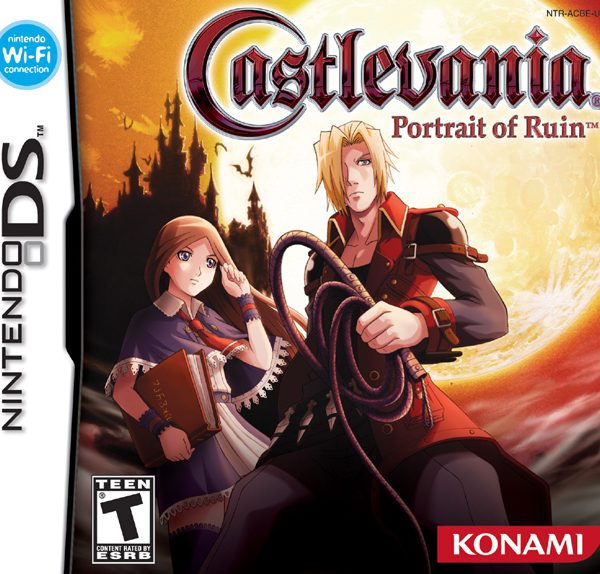 Author’s Note: This review was originally published on January 2, 2007. As you can tell from the topic title, I was a little obsessed with Janet Jackson due to her releasing her 20 Y.O. album. My taste in music has shifted, but my views on this game hasn’t. This is another great entry in the series.

It’s been 20 years since two legends have made their mark in pop culture history. The first is my favorite singer, artist, and entertainer ever. Miss Janet Jackson! The second is the amazing Castlevania series. Portrait of Ruin for the DS marks the 20th anniversary of the Castlevania series, and just like Miss Janet, it keeps getting better and better as time marches on. Sure, it met up with some rough patches (the N64 releases, the All For You album, respectively) but the current stuff makes up for it.

Jonathan Morris, a young vampire slayer who holds the legendary whip and his friend Charlotte Aulin, a gifted magic user, have been hired by the clergy to enter the dark enigma of Castlevania. World War II is upon the globe, and an evil vampire is using all of the malice of the war to draw out Count Dracula’s power. Only the two heroes can stop him. As usual, they’ll receive a bit of help from some people and learn some secrets about heroes and villains alike. Once again, the story isn’t anything special, but it does have some interesting points. There are multiple endings, so even though you know what’s going to happen, you can see a different ending.

That being said, let’s get to the important part of the game, the side-scrolling, tried and true, game play. You’ll run through the castle, as well as new areas that are hidden behind giant paintings, and face off against enemies and deadly boss monsters. You can also shop and take on sub-quests to get yourself new items and powers. The new things added were a nice touch, too. First off, you can chose who to control, Johnathon or Charlotte, with the push of a button. You can summon the person you aren’t controlling and the AI will take over, but if they get hit, it results in MP loss so it’s usually better to fight alone. Johnathon can equip a variety of weapons, and use a variety of upgradeable sub-weapons. Charlotte can only equip books, but her magic attacks are very potent. When you have enough MP, you and your partner can perform a Dual Crush attack, which results in high damage to any enemy hit by the attack. The castle map, as well as the maps inside the paintings, are huge. You’ll be addicted to the game as soon as you start, and entering a new area is as exciting as ever.

The game looks as exciting as ever, too. This a gorgeous, 2D world, that looks like many of the recent 2D Castlevanias. While a lot of the monsters have been reused again, the new ones look great. The bosses look especially intimidating, even though Death looks like Skeletor. This installment has American voice acting, but it’s only attacking shouts and Charlotte stating the name of a spell after it gets cast. As per usual, the game looks and sounds great. Hey, another similarity with Janet Jackson!

Once you finish the game, you can try to get the best ending. Doing so unlocks new modes, as well as the return of Boss Rush mode. Getting a completed game will take you a while due to all the items this game has, and some of the optional quests are tricky. However, going back for more is never a problem with a Castlevania game because of the addicting, classic game play.

Saving the world from Dracula’s curse is just as fun as ever. The DS needed another good title in it’s library to keep up with the PSP! Castlevania: Portrait of Ruin should not be missed. And, just like Janet Jackson’s career, we’ve only seen the beginning!