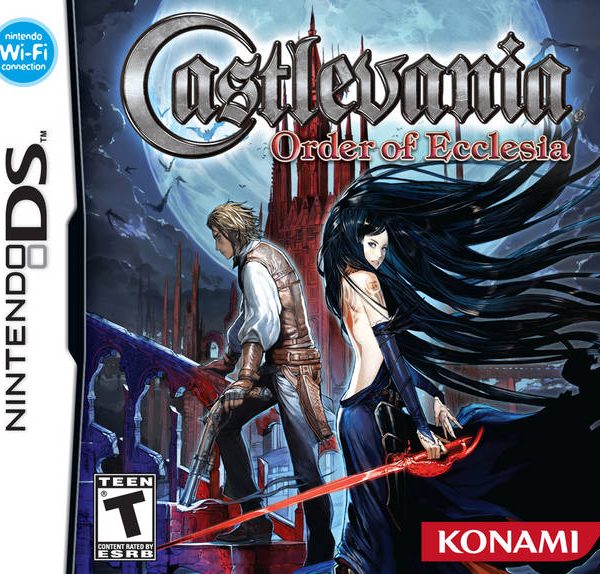 Author’s Note: This review was originally published on December 26, 2008. Like other reviews of the time, I separated sections with “witty” taglines. These days, Order of Ecclesia gets my highest recommendation of the three Castlevanias on the DS.

The Nintendo DS has been getting slammed with some lackluster titles. Luckily, a new addition in one of my favorite series of all time changes that. That is correct, another Castlevania game is here! One thing is for sure, though, and that is that Castlevania: Portrait of Ruin is an outstanding game. When Konami announced the release of another Castlevania title for the DS, I was a bit worried that it would not be nearly as fun as PoR. Castlevania: Order of Ecclesia proved me wrong in so many ways. Not only was the game better than PoR, it ended up becoming my favorite Castlevania thus far, and I think that is a big deal. Anyone who is a fan of the series or anyone looking for an awesome DS game should pick up this title.

My Shanoa!
The Order of Ecclesia is devoted to stopping the resurrection of the vile Count Dracula. Ruled by a master sorcerer named Bardus, the Order of Ecclesia has been practicing various methods of keeping Dracula in the netherworld where he belongs. Their prime student is the mysterious Shanoa. With her ability to control glyphs, Shanoa begins a ritual to earn more power. However, another member of Ecclesia, Albus, stops the ritual abruptly, causing Shanoa to lose her memories and her emotions. Now, Shanoa must find the traitor and figure out the reason behind the halting of the ritual, and ultimately stop Dracula from arising yet again.

Shanoa may be a lackluster, emotionless shell of a character, but the story explains why this is so. As the game proceeds, she starts to earn more and more of her memories. This will make her a bit more charismatic, as well as likable. While there is no trace of a Belmont in this title, they are referenced from time to time. However, let us all be honest with each other; who really expects an intricate plot in a Castlevania title? What we get is something to which we have become accustomed.

Go, Go, Glyph Girl!
Castlevania: Order of Ecclesia takes an interesting approach to Castlevania exploration. At the start of the game, you are presented with a world map with various locations. Completing these locations unlocks new ones. Eventually, you will wind up getting to the legendary castle. However, this is not to say the the places you start exploring lack excitement. Shanoa will travel through forests, swamps, caves, and a sunken ship. There is also a town full of NPCs that will help Shanoa in her travels, provided she helps them with various side-quests. These quests can range from defeating a certain monster to playing hide and seek. Regardless, the side-quests offer a good distraction from the main quest and grant some excellent rewards.

As Shanoa travels through these areas, there will be monsters that wish to do her in. Staying true to the excellent Symphony of the Night formula, there are many types of monsters. Most of them carry items, thus giving perfectionists plenty of extra monster hunting hours. Yes, I was one of them. In any case, to combat these monsters, Shanoa will invoke the power of glyphs, which leads me to start explaining the Glyph System.

Shanoa can equip glyphs to the X and Y buttons. She can also equip a glyph to the R button. Using a glyph consumes MP. As she continues to attack her foes, she will eventually run out of MP. Luckily, the MP bar replenishes at a semi-quick rate. Attack glyphs include swords, axes, magic spheres of negative energy, and lightning. Alternating between X and Y in quick succession yields combo attacks. If the same glyph is attached to both the X and Y buttons, she can perform a Glyph Union. These powerful attacks consume hearts. The glyph on the shoulder button could allow her to get a stat increase, transform, or even fly. To acquire all of these amazing powers, Shanoa will absorb glyphs into her being. Some are dropped by enemies, others are found through story events. Regardless of the method of acquiring a glyph, Shanoa will have a plethora of powers at her disposal by the time she is at the end of her quest.

Getting all of the glyphs may take some work, but the results are well worth it. Furthermore, the more glyphs you have the better off you will be when you face off against some of the most grueling boss fights ever in the series. These big bosses do not pull punches and will stop at nothing at ending Shanoa’s life. The game over screen and you will become fast friends. It is important to not only outfit Shanoa with the best glyphs for the situation, but the best armor and accessories, as well. Leveling up will help a tad, but the key to boss battles is preparation, pattern recognition and plenty of patience. Rushing into the boss fight with guns blazing will be a sure-fire way to see a game over. I will say, however, that the difficulty should not dissuade people from picking up this game. I just warn those who found the previous titles to be easy to expect a greater challenge in Order of Ecclesia.

Such a Lovely Lady.
The 2D design makes yet another triumphant return in Order of Ecclesia. The castle is gorgeous, as expected. The new environments that Shanoa explores are just as detailed. The characters and monsters move in a fluid nature, and fans of Symphony of the Night will be excited to see the return of many of their favorite monsters on the DS screen. Shanoa and other characters interact with one another in story sequences with the beautifully drawn portraits. There is little to say that has not been said already regarding the 2D style of Castlevania titles. It is always a masterpiece to behold.

Girl can Rock!
Alongside great Castlevania graphics is great Castlevania music. The sound track delivers, full of excellent tunes. You are also able to unlock old-school Castlevania tracks if you fulfill certain requirements. The voice acting in the game is nothing more than a war cry or shout, but the work was still done well. You are given the option of having the voice acting play in English or Japanese, which I found to be a nice treat. Again, there is little to say that has not been said already regarding the music of a Castlevania title. It is always a masterpiece to hear.

Black Magic Woman.
Due to the challenging nature of this game, it took me longer than expected to finish. There is more than one ending to see, and getting the true ending will take some work. It will take even more work to unlock all of the extras. I still get nightmares when I think of the bonus dungeons and their unforgiving difficulty. However, the challenge aside, Castlevania: Order of Ecclesia is a worthy addition to the legendary vampire-slaying series. Heck, the challenge may come as a welcome to some people. Regardless of your ability, any fan of Castlevania or any fan of a good game should pick this title up. Konami has done it once again with Castlevania: Order of Ecclesia.