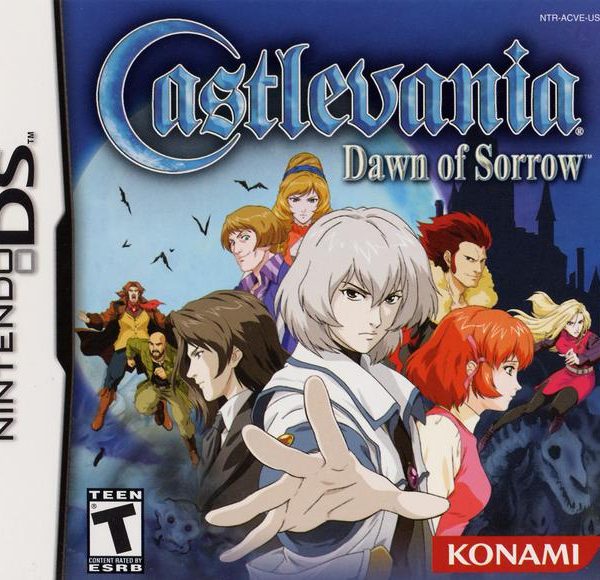 Author’s Note: This review was originally published on November 27th, 2006. It was the first game I got for my DS. I still think that this is a solid entry in the series, but there are some growing pains to deal with since the game places such an emphasis on the touch screen.

Boy, am I glad that I finally got a DS. What better way to start my DS-ing than in the same way I started my GBA-ing? That’s right, with a Castlevania game. Fortunately, my experience with Circle of the Moon was in no way similar to Dawn of Sorrow. DoS for the DS is an awesome game, despite it being totally unoriginal in every way.

This game is a direct sequel to the GBA’s Castlevania: Aria of Sorrow. Those who have yet to try it, I suggest you do so now because of it’s sheer greatness. Dare I say that it is almost as awesome as Symphony of the Night? Anyways, I’m rambling. As I said, Dawn of Sorrow takes place after the events of Aria of Sorrow. Soma Cruz was freed from Dracula’s curse and continued to live his life peacefully. That is until a mysterious witch named Celia Fortner appeared. Interrupting a conversation between Soma and his best friend Mina, Celia summons demons to attack Soma. To his surprise, Soma once again learns he is able to acquire souls of monsters and use their power! Something is clearly amiss, and Soma ventures back into the mysterious world of Castlevania.

For those who have played AoS, you’ll recognize all of the characters in this game. Personally, I wanted to see new heroes. Soma was a cool protagonist and all, but his time is done. It’s time for a new hero. Sure, the new villains and their intentions add a bit of originality and surprise to the story, but this Castlevania could’ve been told a bit better.

However, who honestly plays a Castlevania for their story? I know I don’t. Game play is entirely different. If you have played any Castlevania (except the 3D ones) then the controls will feel familiar to you, despite the game being on a new system. Soma ventures along the huge castle, exploring gardens, dungeons, labs, ruins, and underwater caverns. He can use a variety of weapons, all of which can be upgraded. You can also purchase items and maps from a shop. By hitting th A button, he can perform a special attack with his currently equipped weapon. As you progress through the game, you’ll uncover magic seals which you have to draw with the stylus in order to proceed. It sounds tough, but after some practice it becomes second nature.

There are a plethora of enemies in this game, and the greatest part of Dawn of Sorrow (which was also the greatest part of Aria of Sorrow) is Soma’s ability to gain their power. That’s right, by the end of the game Soma can acquire nearly 100 powers! There are four soul types: bullet (red), guardian (blue), enchant (yellow) and automatic (gray). Other than the automatic, you have to equip the souls manually. Bullet souls use up MP with each use, and this is the majority of type of souls. You use them holding up and then hitting the Y button. Throw a bone, shoot a fireball, send out a plant, spray a water stream, even send out a torpedo in the shape of a fish! There are tons of bullet souls randing from useless to amazing. The guardian souls are activated by holding the R button and drain MP at a certain rate, depending on how long they are activated. Again, there are plenty of possibilities. Transform into a Valkyrie, grow a tail, shoot fire mist, breathe toxic spray, and so much more. Finally, enchant souls require no MP and take immediate effect when equipped. They can boost your stats, allow regeneration, or allow certain bullet souls to be more effective. Yes, the possibilities are endless for Soma as he acquires souls of monsters.

Acquiring all of the souls is quite challenging, however. Each enemy comes with a rarity ranking. The higher the ranking, the more luck stat you need to get the soul. Getting souls can be a very aggravating task, especially if you’re a perfectionist like me who refused to move on in the castle until a certain soul is acquired. I should also mention that the majority of the enemies carry items, and there are tons of secret rooms to uncover. Needless to say, this is a huge game with lots to offer. However, getting 100 percent will take a lot of patience.

However, going through 100 percent of the castle means viewing 100 percent of the castle. The look of this Castlevania is also one that should look familiar to everyone. Beautifully detailed 2D environments help compliment the variety of enemies you encounter. Boss battles are especially impressive, showing off some of the most gruesome appearing enemies ever seen. Character animation is fluid, and controlling Soma as he uses a variety of souls looks great. Graphically, the game does not disappoint. 2D is forever! The music is just as great, even though some of the tracks are a bit on the slow side. There are bits of voice acting in this game, such as when Soma uses a bullet soul. The other sounds were done well, too. No complaints here.

In fact, I really have no complaints about this game. Sure, it’s un-original mechanics and story don’t make it a ground-breaking title, but damn, it sure is a fun one. After completing the game once, you unlock new modes. You can go face all of the bosses again, or go through the story as a variety of new characters. Obviously, you should pick this game up instead of renting it because there is so much to do. Castlevania: Dawn of Sorrow may not be the most original Castlevania to date, but the formula used is worth playing a second time around. This was a great way to start off my DS library, and the same goes for anyone else looking for a title that has action, adventure, length and style. Be on the look out for Dawn of Sorrow, and when you’re done with everything in that game, keep your eyes open for Castlevania: Portrait of Ruin. Castlevania has been around for plenty of years and like a good wine, it keeps getting better with age.