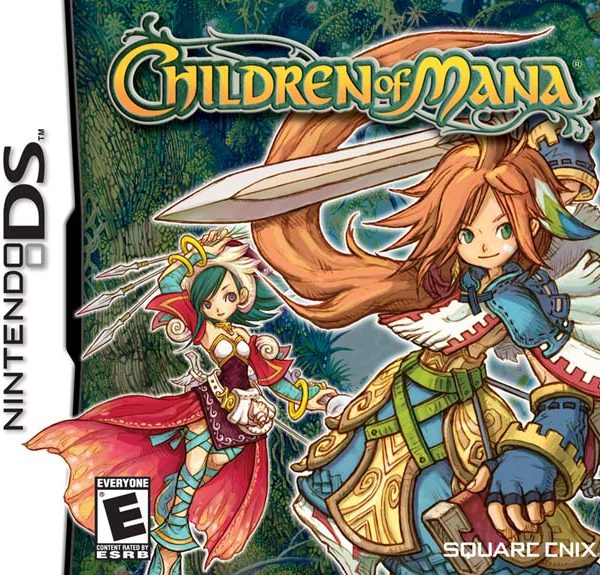 Author’s Note: This review was originally published on May 18th, 2007. Children of Mana was a distracting game that I would often play during my lunch breaks. It didn’t do anything to stand out from the crowd, but it was still an enjoyable little romp.

After playing Secret of Mana many years ago, each announcement of a new installment of the Mana series excited me. Unfortunately, nothing has been able recapture the magic of the SNES classic. Secret of Mana 2 was only playable via emulation. Sword of Mana had a terrible translation. Legend of Mana, while unique, was not a true Mana game. Children of Mana for the DS follows this trend, but that does not stop the game from being fun. It lacks that special charm that makes a Mana game special, but for what it is, it works.

The story takes place on the island of Illusia a few years after the events of Sword of Mana. The Mana Tree towers over everyone, giving hope to those who survived the events many years ago in which many loved ones were lost. Four children, Ferrik, Tamber, Wanderer, and Poppen live on the island with their friends. However, one day a giant earthquake hits the island, and the Mana Tower becomes full of monsters. It is up to the children to find out what is going on.

When you start a new game, you pick one of the four kids as your hero and control him/her the entire course of the game. Veterans of the series will see classic characters, the eight elemental spirits, and familiar foes as they progress through the tale. This game is a dungeon crawler, and the story follows that formula. You get some story information, you go to the next dungeon, you fight the boss, and you repeat the entire process. I wish the game would’ve taken the approach the SNES Mana titles took. Having only one town, with the same NPCs to talk to, gets old and it doesn’t allow you to explore the big world of Mana. Characters develop, but not enough for you to care about them. By the time it was over, I knew just as much as I did from the start about everyone, including the character I chose.

As an action/RPG, the game does well in terms of battle. You have tons of customization options at your disposal. First, you get four weapons for your use: a sword, a flail, a bow, and a hammer. Each has their own use and special attack. By giving and receiving damage, you build up the Fury Gauge. When you enter Fury Mode, you can let loose some very powerful attacks with each weapon. As you attack enemies with these weapons, you’ll notice that physics has taken a back seat. Enemies will fly from wall to wall, ricochet back and forth, and smack into anything in their way when you use certain weapons. There is plenty of entertainment to be gained from playing pinball with your foes. While this game will have you mashing the A button most of the time, you are able to switch weapons and items on the fly via bringing up the classic ring menu.

On each floor of the dungeon, you have to find a Gleamdrop and use it on a Gleamwell to advance. Getting a Gleamdrop will require you to do various things. One floor may have you find it in a pot, another may have you kill a certain foe, and others will have you kill all the enemies. It all depends on the floor. At the end of the entire dungeon, you’ll face off against a boss. You will also get a score based on how many foes you killed, your time, and how many treasures opened. You get to chose a reward based on your score. The formula is straightforward, but the action is fun most of the time. One negative aspect is the magic system. You can chose one of the spirits to take along, but the only worthwhile one is the light elemental. You see, you have to hold the B button, release it and then decide if you want to have it be attack magic or support. Healing magic requires you to touch the spirit, but attack magic is where the badness comes in. You have to stall for two seconds, watch the spirit flash and finally the spell will be executed. Luckily, magic is never needed with all of the hacking and slashing you will be doing.

During your journey you can find a plethora of magic jewels that grant you stat bonuses. Mixing and matching these was fun when it came to building the perfect character. Too bad that you have to do all of your equipping in town or when you reach a certain floor on the dungeon. If I get a new gem, I want to equip it now! The same goes for a shiny and new weapon or piece of armor.

When you clear a dungeon, you will be back in town and can talk to your villagers and go shopping. You can also take on side-jobs to earn extra cash or new items. This means revisiting an old dungeon, but usually the rewards are well worth it. Since this game is rather easy, getting through both the story and optional quests will not be challenging. A few bosses could give you a bit of trouble, but with a plethora of healing items a button touch away, you can easily survive.

One thing that Children of Mana did well was keeping it’s classic, fantasy watercolored look. The game is very colorful, and very eye pleasing. Beautiful, hand drawn portraits accompany the conversations. The character sprites were done just as well. There are even some anime scenes in the game that help move the story along. In regards to the sound, there is no voice acting. However, the great music makes up for this fact.

The heart of the game is set in dungeon crawling, stat building and item finding. For what it is, it does these things well. However, this was supposed to be a Mana game, not a random dungeon crawler. Where is the decent story? Where are the eight weapons? Where is the atmosphere? It’s non-existent, so die-hard Mana fans will surely be upset. Thus, you should probably rent this game before spending the cash. It lasts about 20 hours, and that is with doing optional things, so it will not take you long to complete at all. Perfectionists may want to try to get all the jewels and start a new file with a different character, but I plan on selling it back to the store. On the other hand, this game sports a wonderful multi-player option. If you have some friends who want to hack away at foes, then this game is perfect. For those who wanted Secret of Mana 3, you’ll be let down once again.