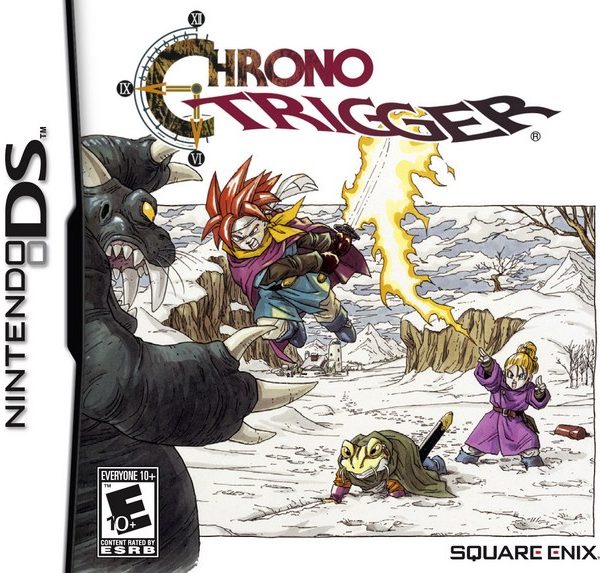 Author’s Note: This review was originally published on January 14th, 2009. Like other reviews around the time, I separated sections with “witty” taglines. Prior to its release, I had gone through Chrono Trigger many times. And yet, this DS version still proved to be a fantastic ride. That’s the magical staying power of Chrono Trigger.

When I heard that Square Enix was remaking one of the best SNES titles of all time for the Nintendo DS, I was a little mixed about it. There are so many games that could be remade or revamped, and they decide to release a game that needed very little improvement. Also, nothing was to be changed except for the writing and some extra bonuses. Finally, Square Enix has been playing the remake game forever. Come on, bring us something new! Despite these thoughts, I received Chrono Trigger as a gift. From the moment I popped in that tiny cartridge, I was glued to the DS just like I was years ago when I played the SNES version. Regardless of your experience with Chrono Trigger, everyone who owns a DS should pick up this title.

Time For Adventure!
Crono is a young man living in the year 1000 AD in the Guardia Kingdom. Today is the day of the Millenial Fair, and Crono is heading off to celebrate. During the fair, he bumps into a young girl with a mysterious pendant, named Marle. The two decide to explore the fair together. The main event of the fair is the telepod, an invention created by Crono’s best-friend, Lucca. Crono, the brave man that he is, tries out this latest devise. After it is successful, Marle gives it a shot. However, something causes the telepod to react to Marle’s pendant, and she gets swept into a mysterious portal! Crono goes after her, only to wind up in the year 600 AD! Who is Marle? What is with her pendant? How can he travel through time?

The story is the same as it was before. Sure, a time travel plot leaves the game open for a bevy of unanswered questions and paradoxical quirks, but the classic plot still remains as fun as ever. The only difference this time in comparison to the SNES version is new writing. The new script was a welcome because it gave the game a more current flavor. Crono meets a cast of lovable characters from across time. Whether or not you are familiar with the crew, the fun interactions with them are excellent. Conversations over the course of the game change depending upon which of the seven characters are in your three-person party. This created an endearing dynamic and gave each character a sense of distinction.

Splendid Sprites!
The graphics in the DS remake are the exact same as they were back on the SNES. A conversion like this is actually hard to do. Regardless, the game looks as crisp and colorful as ever. For a 16-bit game, Chrono Trigger was ahead of it’s time. Today, the graphics are still able to compete with the big players. Along with the lovely 2D sprites are some animated cut-scenes drawn by Akira Toriyama. While not my favorite anime artist, the cut-scenes were a welcome add-on for helping move the story forward.

The Themes of Time.
Like the graphics, the DS remake of Chrono Trigger used the exact same music and sounds from the SNES. Heck, the game SOUNDS exactly like it did on the SNES. Again, making the game like the original was probably no cake-walk. The end result plays excellent tunes and sound effects. The classic theme songs of each character are back and sound as great as ever. Lucca’s theme is still my favorite, and continues to be one of my favorite songs of all time from a video game.

Classic and Current Chrono Trigger.
My initial gripe about the Chrono Trigger remake would be the lack of new game mechanics. However, upon completing the game, I would not have had the game play in any other way. While the touch-screen is used magnificently, you are able to play the entire game without it. You can also have the display look like it did on the SNES. If you decide to go with the updated version, you will see that all of your menu options are available with the stylus. Navigating the menus with the stylus is a breeze. Thus, both the current mode and classic mode of Chrono Trigger are easy to use. This not only applies to the menus and the interaction through the world, but to the battles as well.

Battling in Chrono Trigger is similar to the Final Fantasy titles from the same era. The Active-Time Battle system makes a return in Chrono Trigger, but there are a few characteristics that make it different from Final Fantasy and the basic attack, skills, and item commands. First, encounters can be avoided by not touching certain enemies. Also, certain skills effect an enemy group, thus allowing you to finish off more enemies than usual with a skill. Furthermore, the location of an enemy can effect which character in your three-team party they attack. These little quirks add an extra hint of strategy to the game.

In the DS version, battles are the same as ever. Once again, you can chose whether or not to use the stylus in making your battle selections. Either way, battles progress smoothly and are always exciting. Unfortunately, they are also easy. Chrono Trigger is an easy game, even during the final dungeons. Skills and magic are absolutely lethal, and due to the fact that you are constantly receiving magic restoring items from enemies alongside the money and experience points, your normal attacks become nothing more than an afterthought. Your characters can also perform double attacks and triple attacks, causing insane damage to your enemies, as well. Despite this fact, the battles are still fun. Learning new skills, seeing each character in action, and watching a devastating triple attack unfold holds the same level of excitement as it did in the SNES era.

The Original Plus.
When all is said and done, and you receive one of the eleven endings, you can begin a New Game Plus. This allows you to start from the beginning of the story, but with all of your items, skills, and levels. Getting everything will require you to play the game multiple times. You can check your progress by opening up the new, interactive gallery. Here you can see all the endings you have uncovered, watch all of the animated scenes, listen to music, and more. Seeing as the game is very short, running around 15 hours, playing the game more than once is a joy. Thus, completing the gallery has the potential to be lots of fun.

Also new to the DS version is a monster arena and a few extra dungeons. Did I play through these? No, not one bit. Both of these additions seemed like an effort from Square to make the game more appealing to those who already conquered Chrono Trigger on the SNES. Well, as an avid Chrono Trigger fan, I can easily say that these additions were unnecessary because the finished product on the DS is excellent without the gimmicks. This is not to say the some of the rewards to be reaped in the extra dungeons are not nice, but they are far from worth the effort.

Truly Timeless Time Traveling.
Chrono Trigger is a classic, bottom line. Whether you are a seasoned time traveler or just starting out in the world of time travel, Chrono Trigger has something for everyone. The new additions like the monster arena are a bit trite, but everything else about the game stays true to the SNES classic. Despite my initial complaints, Chrono Trigger turned out to be a game that could easily stand the test of time. That, my friends, is what makes a good game when you get right down to it.