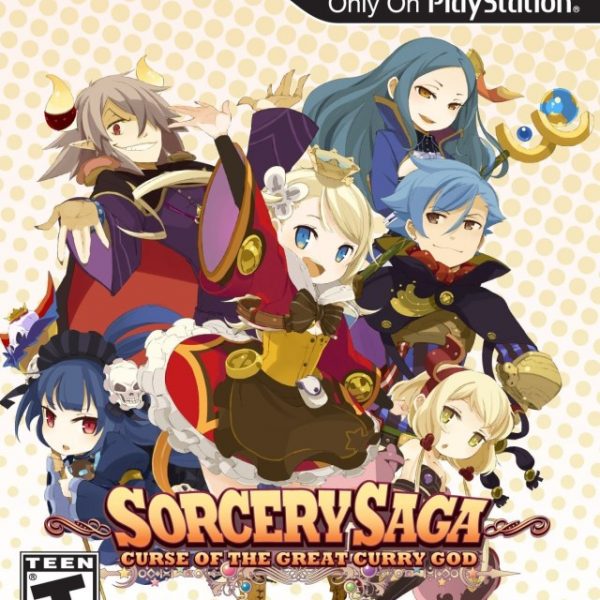 When was the last time you played a game that just made you feel warm and fuzzy inside? That is how I felt with my time playing Sorcery Saga: The Curse of the Great Curry God. Compile Heart decided to take the classic concept of the rogue-like dungeon crawler and mix it up with a heartwarming, stomach filling story with a zany cast of characters, adorable graphics and a heaping helping of content. Despite the amount of fun it provides, I’m having a bit of difficulty in recommending the title due to the nature of genre. Read on to see if Sorcery Saga has enough flavor for you.

The game is about an adorable girl named Pupuru. We are introduced to her as she is about to take her final exam and graduate at the Sorcerer’s Academy. Despite the fact that she didn’t study a lick of material, she obtains a perfect score on her exam. Her next task is to grab a magical item from a magical tower that grants magical powers and is full of magical magical-ness. Unfortunately, a (magical) monster named Kuu has eaten the orb and, as a result, Pupuru can’t graduate. But, this does not get her down. No sir, she has decided to take on a new venture! She will find legendary ingredients to make a special, legendary curry in order to prevent her favorite curry restaurant, Smile Curry, from going under. She’ll have to deal with falsely accused deviants, obsessive overlords and a trio of hero wannabes as she and Kuu go on an adventure of delicious proportions.

And delicious does not even begin to describe this tale. First, I love curry. The mixture of rice, spices and a fantastic sauce makes for a great meal. People, you should try some after reading this review. I know of a few joints that have curry so good it will make you wanna slap yo’ momma. See, this is why I say don’t play this game on an empty stomach: now I’m starving. Curry plays a vital role in this story as Pupuru seeks the legendary ingredients. There is no world saving or devastating revelation; just a young a girl trying to save her favorite restaurant. This light-hearted story is wonderful, but it doesn’t quite prepare gamers for the grueling nature of the gameplay.

Well, to be fair, Pupuru’s journey isn’t as grueling as others familiar with the rogue-like genre. In town, Pupuru can shop for items, equip spells and upgrade equipment. There is also a mini-theater where you can watch cute skits of her and other characters involving certain items that are found in the dungeons. But, the main portion of your playing will be in a dungeon. Staying true to the genre, Pupuru always starts at level one and has a very limited inventory. When she does something, the enemies around her will do something. Certain monsters have the ability to steal items, strip Pupuru of her equipment, and/or change her items to pickled onions. I wish I was kidding with that last one.

While it sounds like a typical rogue-like, there are few things to keep the game play fresh. Kuu, the bottomless pit of a mascot, joins Pupuru on her quests. He’ll also help Pupuru fight enemies, but he needs to be fed. By throwing items at Kuu, he’ll eat them and restore his hunger meter. Kuu will also learn random skills. Unfortunately, most of them are useless. If Kuu’s hunger runs out, then you can’t proceed to the next floor. If Pupuru’s knocked out, you lose all of your stuff and get transported back to town. Sorcery Saga is a rogue-like through and through, but in all honesty, this is one of the easiest games I have played. Since Pupuru can upgrade her swords, staffs and shields, she can essentially become a powerhouse. Even entering a dungeon at level one isn’t enough for enemies to make a dent in her. Plus, her HP recovers with each step. Despite the nature of the rogue-like, Sorcery Saga is a simple title.

Not only is it easy to play, but it’s also easy on the eyes. Pupuru is ADORABLE. Not only can you change her outfits, but she can equip a variety of unique weapons and shields. She’ll fight some cartoony monsters both small and large in a variety of colorful dungeons. Sorcery Saga doesn’t do so well in the sound department, unfortunately. The good news is that the entire game is voiced in Japanese, many of the areas have J-pop tunes accompanying them, and the song in the opening movie is great enough to watch it over and over. However, for every good song, there are at least three bad ones. The music is the worst feature in the game, which comes as a major downer since the atmosphere is so fresh and carefree.

Still, the biggest thing that would turn gamers away from checking out Sorcery Saga: The Curse of the Great Curry God is the fact that it’s a rogue-like with heavy emphasis on dungeon crawling. This genre isn’t for everyone, but remember that this is one of the easiest titles not only in the aforementioned genre, but of this generation. Finishing the main story will only take you about 20 hours if you have good equipment. Following the ending credits, Pupuru gets access to a gigantic bonus dungeon. Finally, trophy hunters will have an easy time acquiring everything if they don’t mind hours of grinding. All in all, Sorcery Saga: The Curse of the Great Curry God is a great little title that I recommend to anyone looking for something lighthearted. Now, if you’ll excuse me, all of this talking about curry has left me famished.