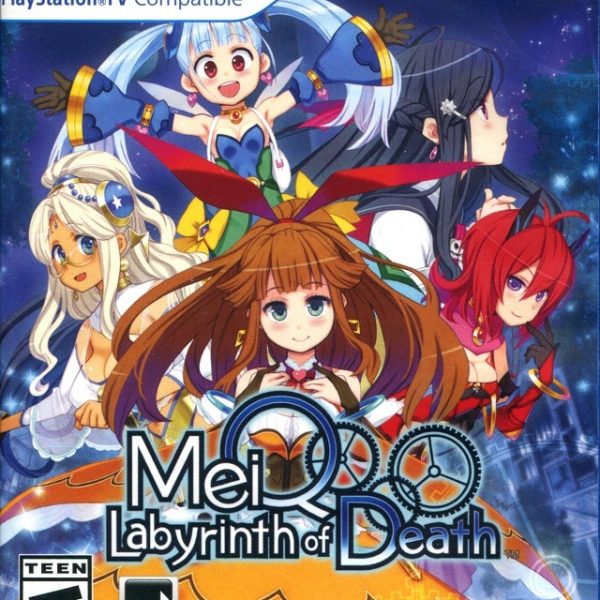 The PlayStation Vita is the go-to system for all things dungeon crawling. MeiQ: Labyrinth of Death is another dungeon crawler that comes from the folks at Compile Heart and Idea Factory. Despite its weird title and interesting premise, MeiQ is one of the more boring options available on the Vita. Those that wish to crawl in dungeons will find something enjoyable for a few hours. With all of the competition out there, MeiQ can be easily forgotten.

MeiQ takes place in the city of Southern Cross. Before meeting our heroes, players learn that the world has stopped rotating. Now stuck in an eternal night, monsters have started to appear and run amok. In order to get the world moving again, it needs to be “turned” with a magical key. Estra, the Yellow Machina Mage, has been summoned to Southern Cross to find this key. Alongside other Machina Mages of different colors, they will venture through Southern Cross’ various towers to set the world on its axis. I enjoyed the premise of MeiQ. Unfortunately, there’s not much more to the story than the above. There was room for much more development with both the story and the characters. Estra works well as the leading lady, but her and the rest of the girls that join her aren’t as fleshed out as they could have been. I realize that the appeal of a dungeon crawler isn’t the story, but MeiQ’s looked like it could have gone somewhere.

Most of your time in MeiQ will be spent exploring its titular labyrinths of death. Indeed, they are huge, maze-like and filled with plenty of monsters and traps ready to send you back to the city where you can prepare for the treks. One thing worth noting is that if you do get a “game over” you don’t lose any progress; you’re just sent back to the town. In town, you can upgrade your characters. Estra and the rest of the girls are the typical mage-type characters in that they can cast powerful spells, but are susceptible to attack. In order to protect them, you need to pair them with robot guardians. These guardians come in various shapes and sizes. They can be enhanced with unique parts, gems and accessories. Building your guardian is where the game offers the most customization. Once everything is set, you’ll be sent to a dungeon.

For a while, Estra will be by herself. She has access to special abilities unique to her, and her starting guardian is very powerful so those worried about a difficult start should feel at ease. Combat is turn based and…that’s about it. It can be sped up, so that’s nice. It’s basic and gets progressively difficult the further in the story you get. With the ability to change the difficulty level at will, all player experience levels will find the game manageable. Winning a battle yields experience, money and items that can be used to further upgrade your guardian. Eventually, Estra will be joined by the other Machina Mages. You can have up to three characters in battle at a time. This makes battles slightly more fun and strategic, especially when going robot to robot against a powerful boss. But, again, combat itself isn’t anything that hasn’t been done before. It’s functional at best. But, it’ll start to lose its appeal during longer play sessions.

The game’s art is one of my least favorite aspects. The characters look dopey and wear goofy expressions. The costumes are fun, but those faces. Seriously, those faces. You’ll be seeing those during the game’s story events. Outside of these, the game looks fine. Since you’ll be visiting the same areas multiple times, you’ll need to get used to your surroundings. Battle effects have a bit more variety. I enjoy seeing my customized mechanical constructs put to work in battle as they topple foes that can become twice their size. The music in MeiQ is catchy. Outside of great opening theme, there are some tunes that you’ll be hearing a lot of in the various towers that will have your toe tapping along to the beat. The voice acting can be in either English or Japanese. Both options sound great. Estra may look silly, but she has a very pleasant voice.

MeiQ has multiple modes of difficulty, which can alter your play time through the main story. However the game can be completed in 20 to 30 hours. MeiQ emphasizes replays. Playing the game on higher difficulties in a New Game Plus will unlock new areas. Certain trophies will extend the playtime even further. But, the question is, will you want to go through the tedium? MeiQ: Labyrinth of Death will appear to dungeon crawling fans, but even fans of the sub-genre won’t find much enjoyment beyond customizing their giant robot. The story doesn’t offer much, the characters feel flat, and the dungeons lack variety. Only look into this if your dungeon crawling well has run dry.

Overall, 4.5/10: MeiQ: Labyrinth of Death isn’t a bad dungeon crawler, but there are ones out there that are much better.