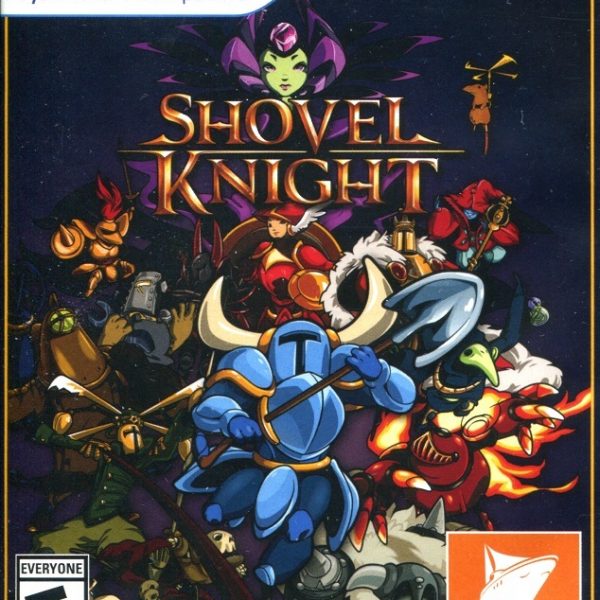 Shovel Knight is a 2D side-scrolling platform game that gamers who grew up with 8-bit magic will eat up immediately. If you’re like me and grew up with Mega Man, Zelda, Castlevania and a slew of other masterpieces, then you will have no problem shoveling head first into this Kickstarter success story. Yacht Club Games captured the magic of a treasured era in Shovel Knight and provided hilarious writing and effects to keep things fresh and modern. While this review is for the Vita version of the game, there are tons of avenues to take if you want to embark on a shovel-tastic adventure.

The story of Shovel Knight is a fun one. Before beginning his journey, we learn that Shovel Knight and his love interest Shield Knight embarked on epic adventures across the world. However, Shield Knight became possessed by a cursed amulet. This caused Shovel Knight to lose his adventurous spirit and he exiled himself from the rest of the world. Years have passed, and an evil enchantress has started a plot to take over the world with help of other knights. Now, Shovel Knight is back in action. Hopefully, his chivalry and shovelry will lead him to his beloved Shield Knight. Shovel Knight’s tale is full of humor, witty dialogue and over the top characters that could only work in an 8-bit inspired realm. It doesn’t take itself too seriously, which is a contrast to the level of difficulty it presents.

As mentioned earlier, Shovel Knight is a 2D side-scrolling game full of perilous jumps, relentless enemies and endless challenges. You take control of titular hero as he runs through various levels known as the Orders of No Quarter. He can use his shovel to thwack enemies, dig up piles of treasure, reveal hidden passages or reflect certain enemy projectiles. Shovel Knight is a decent jumper, but pressing the down button after jumping will let him use his shovel as a pogo-stick. This lets him access areas that would normally be out of reach. His starting abilities are familiar and fun, but things don’t stop there. With the gems you collect, you can buy armor enhancements, new abilities, health and magic upgrades, and magical relics. Relics are sold by a colorful fellow that is found in blue chests in Orders of No Quarter and in one of the towns. These relics require magic power and allow Shovel Knight to fly horizontally, punch through walls, shoot fire, and more. With all of the stuff at his disposal, it sounds like Shovel Knight is a force to be reckoned with. Indeed, he is, but Shovel Knight is by no means an easy game. The frustration of missing jumps, losing a fight against a powerful boss, and other growing pains that we all know from the 8-bit area are all too real in this challenging title. Luckily, the levels in Shovel Knight feature plenty of checkpoints. Plus, you have infinite lives. Of course, losing a life is not without its consequences: you will lose a fraction of your hard earned money. However, taking a cue from the fantastic Souls series, you have a chance to reclaim your lost cash by grabbing floating money bags at the same spot you perished. Shovel Knight is frustrating as an old-school NES game, but it’s the same level of frustration that will keep you addicted to the screen. The tight controls and multiple options at your disposal will always keep you coming back for more. Plus, there is no need for a password due to the game auto-saving upon a level’s completion.

The graphics are a throwback to one of the most influential times for video games. The pixel perfect presentation in Shovel Knight might look simple, but it has tons of detail to reflect its home on the modern console. On the Vita, Shovel Knight looks spectacular. Despite the simple look, there is so much variety to the game’s levels, enemies, and special effects. The music is another highlight: a chiptune sensation that is reminiscent of Mega Man, Casltevania, and other classics with memorable music. In fact, some of the tracks were created by Mega Man maestro Manami Matsumae. This is one soundtrack that delivers a thorough listening. Even if you have never played Shovel Knight, you will immediately feel nostalgic.

If I had to find something to complain about, it would be the fact the game is over too soon. The New Game Plus feature adds an insane level of challenge, one that would require complete mastery of the coveted shovel. Like other games from the 8-bit days, it’s easy to pick up and play Shovel Knight all the way through or for quick sprints. In the Vita version, you have the opportunity to go blade to blade with Kratos from the God of War series. Overall, I had a blast going through Shovel Knight. I love it when modern companies create tributes to a bygone era of gaming. Shovel Knight is a great example of it.

Overall, 9/10: Addictive, hilarious, and filled with some of the best controls on a modern console. Shovel Knight is a must-have.