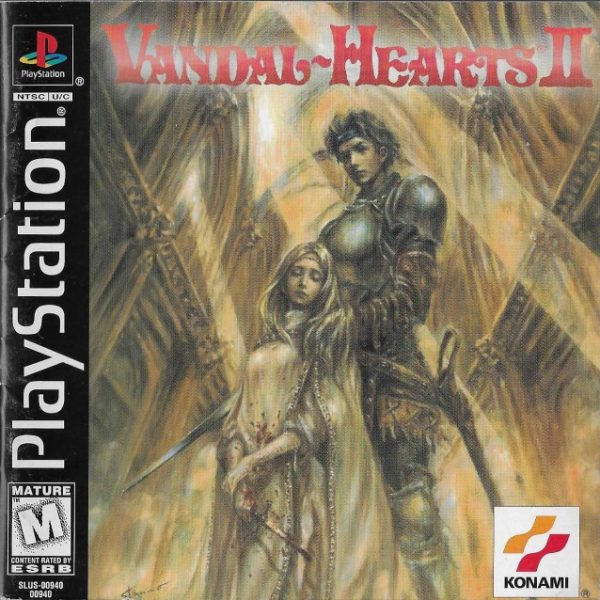 When you think about it, games like Final Fantasy Tactics or Stella Deus don’t sound appealing on paper: you have a small army of soldiers that move a certain number of spaces on an isometric map and exchange blows until victory conditions are met or you suffer a defeat. Oh, and you often find yourself at a terrain disadvantage; a literal uphill battle. Sometimes these battles can take up to an hour. Even that brief description sounds like the games are slow, tedious ordeals. They can be, but I find myself fortunate enough to enjoy them. Vandal Hearts II is no exception.

Vandal Hearts II takes place on the continent of Rognant. Describing all of its lore that takes place before the game begins is beyond the scope of this review, so I’ll cut to the current era. In the Natra Kingdom is the small village of Polata. There, a young boy named Joshua and his two friends, Clive and Yuri, meet a wounded traveling swordsman named Nicola. Joshua and his comrades bring Nicola back to the village for treatment, but this chance encounter sets a domino effect into motion. Nicola has a past. He’s running from something that might be too much for Joshua to handle. Joshua’s childhood is about to end abruptly.

The story in Vandal Hearts II is a grim yet exciting journey. It has a large cast of characters, political intrigue, backstabbing royals, evil cults, religious nutcases, and a group of heroes at the center of it just trying to survive. Joshua has the opportunity to make a few choices during certain story events that will determine who lives, who dies and which of the many endings you discover. The downside to this is that there’s really no easy way to see it all without using multiple save files and culminating a good 200 hours of game time. So, I recommend looking at a guide if you’re aiming for a specific ending.

It’s clear from the start that Vandal Hearts II’s design is heavily inspired by a Yasumi Matsuno production. Rognant’s map could be right at home in either Ivalice or Valeria. The battle maps are viewed from an isometric perspective. Taverns and shops appear as one screen. Going deeper, every piece of equipment comes with its own picture and description. Beyond that, Rognant’s icons are color coded: towns are blue, field maps with optional battles are green, story destinations are orange, and bonus maps are yellow. It’s something that we’ve seen before – and it’s always worked well for the sub-genre. Vandal Hearts II is no exception.

Getting into the nuts and bolts is when you’ll start seeing features that make Vandal Hearts II stand out. The first is with equipment. Equipment determines your character’s stats in battle. Sure, levels and experience points help build a base, but the right set of equipment will make all the difference. In fact, you can make one character a spell-blasting wizard one battle, and then arrange his or her gear so they become an ax wielding warrior the next. It’s a jack-of-all-trades formula that might sound off-putting, but stay with me. You see, every weapon in Vandal Hearts II comes with an ability that gets unlocked after said weapon has been used enough times. These abilities can be moved between like pieces of equipment (dagger to dagger, staff to staff, etc.). You’ll have a slew of toys in your toy box for supporting your team and disposing your enemies. The weapon variety is through the roof, too. In fact, the game keeps track of how many weapons you accumulate. Finding 100% of the weaponry grants you a special bonus.

As exciting it is to play around with your equipment, it can be tedious since menu navigation is cumbersome. Some abilities, specifically the two that allow you to discover hidden items and open a treasure chest, must always be equipped. Weapons can only hold so many abilities. Also, you’re unable to combine abilities with opposing elements. These are minor complaints but they’re worth noting.

After leaving a town, setting up your equipment and/or continuing the story, chances are you’ll end up in a battle. This is where Vandal Hearts II will cause a major divide among strategy-RPG fans. The game features the one of a kind Dual Turn System. Basically, when one of your members acts, an enemy acts at the same time. They perform a sort of dance as they move in unison. It sounds like you’d need to use all of your strategic know how in order to emerge victorious. The truth is, it’s easy to predict how an enemy is going to act. Near the end of the prologue, I realized that the enemy would always target the closest character with its back turned. This allowed me to lure an enemy and completely destroy it with a few teammates. There are still things to take into account such as height, positioning, area of attacks, and keeping Joshua alive. But, once you understand how simple it is to whittle the enemy party town, Vandal Hearts II ends up being one of the easiest games in a genre that is known for difficulty.

But, battles are still enjoyable. You’ll be fighting in various terrain against bandits, cultists, warriors, and massive monsters. Destroying them is a treat since it means you get to utilize your weapon abilities. These are truly a sight to behold. The level of creativity put into the spell effects can’t get enough praise. Sadly, the one thing missing from the presentation is the blood geyser. They were so fun from the first Vandal Hearts. But, it’s still a bloody (and impressive looking) game. It’s worth noting that the soundtrack is excellent. There’s a wonderful track that plays for every situation.

Doing as much as possible in Vandal Hearts II will take at least 50 hours. If you don’t care about doing as much as possible and just want to get to one of the game’s conclusions, then you’re still looking at 35 to 40 hours. This is a long game with a lot to see and do. To add additional hours to that play time, you can try to see all of the different endings. Despite some tedium and a battle system that you’ll either love or hate, I recommend checking it out. There’s a great tale in here waiting to be discovered.

Overall, 9/10: Vandal Hearts II has the look and story of a classic strategy epic, but its take on combat sets it apart…for better or worse.