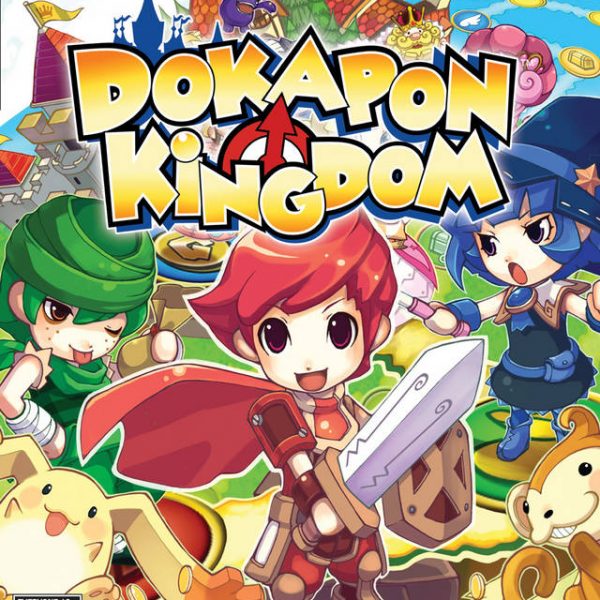 Have you ever seen a really ugly baby, and then get confused because the baby’s parents are really attractive? That’s how I feel with Dokapon Kingdom. Two of my favorite companies, Sting and Atlus, are responsible for this game. Going with my analogy, the two companies are the hot parents and the result was a child that would make anyone say, “Yikes! Send it back.” This attempt to combine party games with role-playing games didn’t work.

Dokapon Kingdom takes place in the…Dokapon Kingdom, a land where money is always on everyone’s mind. Sadly, the coffers of the citizens are being stolen by invading monsters. With interests rates high and stock options plummeting, the king of Dokapon puts out a request for adventurers to stop these beasts and retrieve the kingdom’s wealth. As a reward, the warrior who earns the most after the threat is gone will win the hand of Princess Penny. I’ll give the game some credit: the story is cute. Also, since your warrior avatar can be either male or female, the game has a surprisingly progressive nature that I never expected. But, in the end, the story exists so the check box under RPG criteria is checked. In fact, there are various modes of play available that allow you to skip the story entirely.

I do want to mention a couple of other highlights before getting to the negative. Dokapon Kingdom’s color palette is through the roof. The rainbow of tints and hues makes is pleasing. The music compliments the colorful presentation. There’s a track for everything that ranges from the upbeat to the ominous to the jovial to the fantastical. This is another game where I recommend listening to the music instead of playing the actual game. To add, the game’s voice acting is solid. Everyone delivers their lines with comical inflections that add to the silliness of the game’s premise.

Despite the game looking pretty and sounding great, Dokapon Kingdom is not fun to play. It doesn’t matter whether you’re venturing solo with computer-controlled AI, or you’re playing with friends on the couch. Dokapon Kingdom uses party games like Mario Party as a base and implements a medium dosage of role-playing. You start by creating a character that is assigned a class. More classes become available as you fulfill certain criteria, all of which have unique quirks. Players get plopped on the board and the games begin. You’ll spin a spinner, move the number of spaces from the spin, and watch what happens after you’ve landed on a space. You might find an item, acquire a spell, participate in a mini-game, or participate in a one-turn battle. It all depends on the color of the space.

Yellow spaces are designated for said battles. They’re kind of like the duels from the Suikoden series. At the start of a turn, you pick an option depending on whether you’re on the offensive or the defensive. If you choose the option that beats your opponent’s, then you’ll deal massive damage or take little from their attack. Choose wrong, and chances are you’ll get knocked out of the game for a few rounds. It’s basic stuff, but it gets really old, really fast.

In fact, you’ll be seeing a lot of stuff that makes each session far longer than what’s expected of a party game. There will be moments when you help or hurt towns to earn more money, back stab other players, and…you know what? I’ll just say this: if you’ve played (suffered) through a full game of Monopoly, then you’ll have some idea of the ins and outs of Dokapon Kingdom. In a word, it’s boring. Everything takes too long. And, of course, the randomness of the spinner and game board adds to that length. Like Mario Party, the AI will gain every advantage available. It makes each game a slog. Now, keep in mind that I played this solo and didn’t have any fun. But, I can’t imagine this being netter with friends. The thought of recommending Dokapon Kingdom for a game night sounds like a surefire way to never be invited to a game night again.

It’s hard to say how long one game of Dokapon Kingdom will last. It all depends on luck and chance. After my character lost another battle and had to wait another three turns to recover, I knew that my time with it was done. I’ll be honest. I can’t stand games like Mario Party. The same can be said about long board games like Monopoly. But I do like RPGs. I hoped that the RPG aspects of Dokapon Kingdom would be enough to outshine my ingrained loathing. It wasn’t. Even with powerhouse game companies like Atlus and Sting behind the finished product, Dokapon Kingdom was a crap. It’s not worth your time.