Valkyria Chronicles 4 takes place during the second Europan War. The Federation and the Empire are fighting over a source of energy called Ragnite, with the Empire slowly but surely gaining momentum. As the Federation continues to struggle, a new band of heroes has come together to fight for their homeland. Valkyria Chronicles 4 features Squad E of the Ranger Corps, a group of exceptional soldiers that take on the most dangerous missions. Their leader is Claude Wallace. Squad E has a rough road ahead of them filled with forbidden Ragnite research, hidden agendas, spies, and the snowiest winter Europa has ever seen.

These days, I’m realizing that most story-driven games tend to give the impression of a strong start. Valkyria Chronicles 4 is no exception. Well, actually. No. From the jump, squad leader Claude shows that he doesn’t have the chops to lead Squad E. He’s emotional, unsure of himself, and tends to clam up when he’s around the game’s heroine, Riley Miller. To top this off, he has the ability to read the wind; he can predict the weather. It’s the most far fetched aspect of this series I have ever seen. Other squad captains from the series had their own talents that made them worthy leaders. Claude’s weather hacks are not only silly, but they’re questionable in terms of leadership criteria. Minerva Victor, Claude’s rival, would have made a much better lead. Luckily, two other characters in Squad E tend to pick up Claude’s slack. Raz, a Darcsen, is a trigger happy trash talker that really comes into his own after Claude earns his respect. Kai Schulen is an expert markswoman with a stoic demeanor and a killer eye. Finally, every member of Squad E gets their time to shine as you unlock Squad Stories. These side stories shed some light on each non-canon character and are an absolute delight to play through.

The storybook format has returned to Valkyria Chronicles 4. While in Book Mode, you can view individual story events in chronological order. Returning to headquarters lets you create new gear,  level up your squad with experience points, go to the mess hall to learn new orders, or go to Claude’s private quarters to view some extra information courtesy of the glossary, newspaper articles, and personnel files. Skirmishes and Squad Stories can be accessed from Book Mode, too. Most story events play out in a boring “talking head” fashion. However, sometimes they show in stunning, cel-shaded movies. Dubbed CANVAS, these moments are few and far between. But, they’re absolutely gorgeous. This series has always had beautiful presentation. It’s nice to see that trend has continued to the current generation. And yes, Hitoshi Sakimoto returned to conduct another fantastic collection of music. 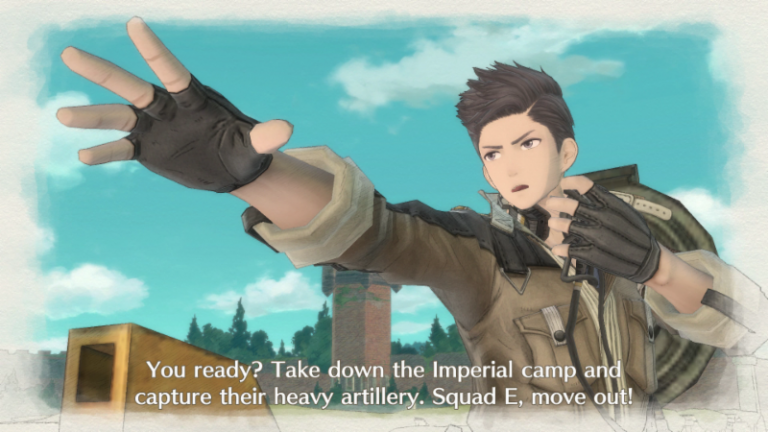 Claude Wallace might be a doofus, but at least he (and the rest of the game) looks pretty. Check out that perfectly parted hair.

Most of your time in Valkyria Chronicles 4 will be spent in battle. This is where the game truly shines. While the goal of most battles is to capture a base or defeat a certain foe, it’s the strategies you must come up with and the map’s designs that set battle apart. At the start of a battle, you’ll select your squad and position them on the map. Squad E is filled with the usual classes. You have the Scouts that are able to run a great distance and perform reconnaissance. You have the Shocktroopers that are low on endurance but high on attack power thanks to their heavy machine guns. Lancers are back with the ability to demolish tanks, Gatling guns, bunkers and anti-tank cannons with one shot. Engineers aren’t much use for defeating other soldiers, but they can resupply other troops and have the ability to repair tanks. Snipers have the ability to perform a powerful, instant kill-shot thanks to their rifles’ ability to zoom. Finally, we have a new class called the Grenadier. With their massive set ups, they can launch powerful explosives that detonate on impact. They’re a fun, new class that opens up more strategic options. Of course, your enemies have all of these classes to work with, too.

Once again, battles flow in the typical player-turn, enemy-turn fashion. At the top of the screen you are presented with Command Points. When you run out of CP, your turn ends. To fulfill your objective, you will take command of individual units, have them perform an action, and then end their turn. Your units can move as far as their AP bar allows. Most of the time, battles are challenging, but rewarding. Enemies will show your squad no mercy, but the right combination of troops will yield wonderful results. You will eventually gain access to two tanks, an APC, and even a gigantic battleship. Claude will learn a multitude of orders that can be issued to really pump up your squad.  You’ll want to use all of these tool available so you can end the battle in as little time as possible. Prolonged battles are death sentence since enemies are much more relentless this time. Also, finishing a battle quickly yields better rewards. Having the ability to save at any time encourages players to try different strategies. 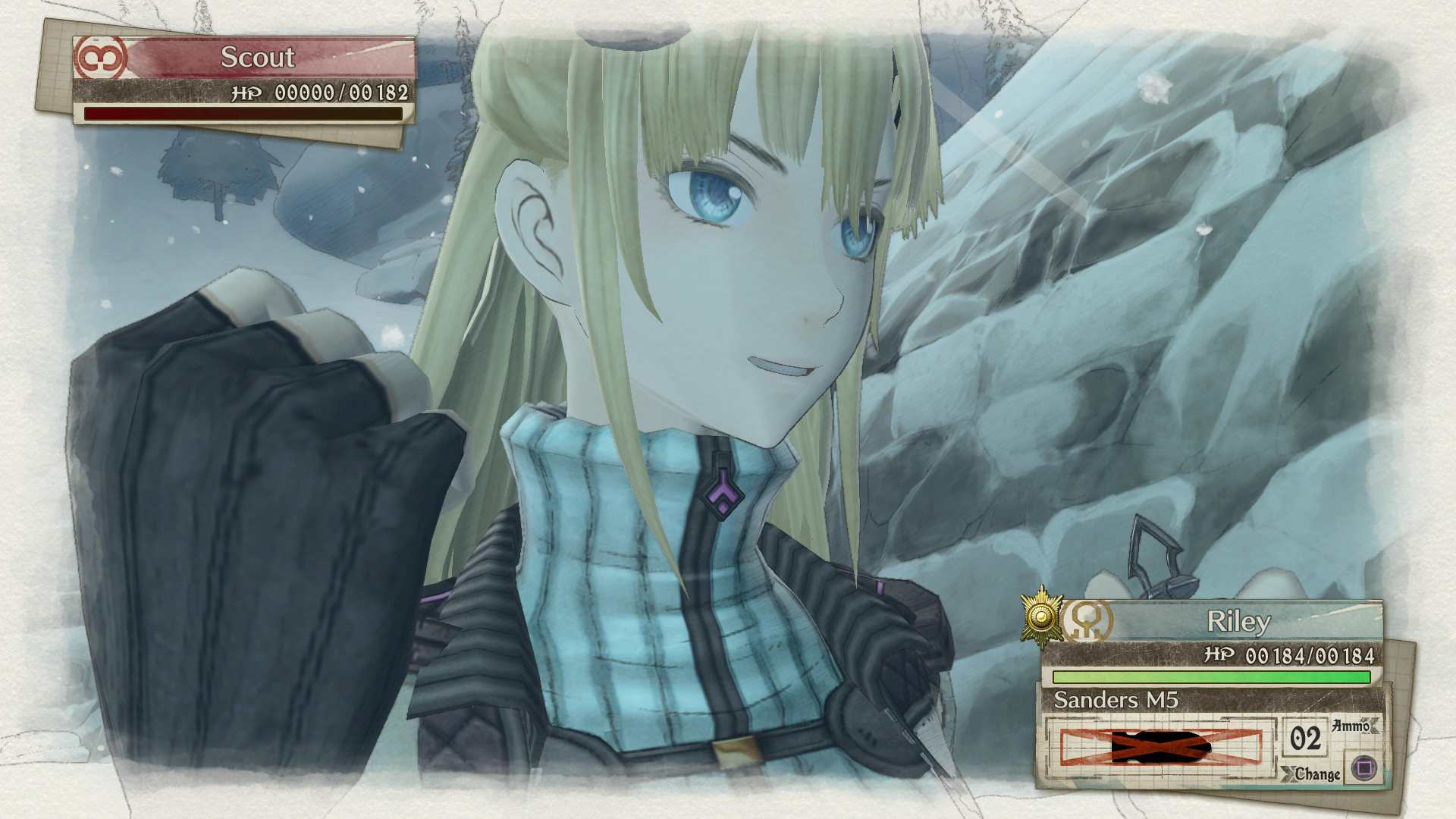 Grenadiers like Riley Miller can launch powerful projectiles at opponents that can take out small groups or blow up tanks. Just be sure to keep them well protected.

Valkyria Chronicles 4 has eighteen story chapters, a few interludes, multiple extra battles and more to keep the clock running. My final time said 40 hours, but I can assure you it was much higher than that due to resets and retries when battles weren’t going my way. I’m glad that Sega created another proper entry in this series because, at its core, this game is fun. My issue with it is that the story made a chain of bizarre choices and highly unbelievable dialogue that really took away the immersion. Even the most exciting battles won’t prevent you from watching a story event, raising your eyebrow in confusion and saying, “Seriously? Did that just happen?” But, this is still a game I recommend. If you’re new to the series or a long time veteran, Valkyria Chronicles 4 does a good job of keeping up with the tradition of fun since its advent.

Overall, 7/10 – Valkyria Chronicles 4 doesn’t have a good start due to Claude Wallace’s somberness. But, the great battles and wealth of side content will be enough to keep you coming back for more.