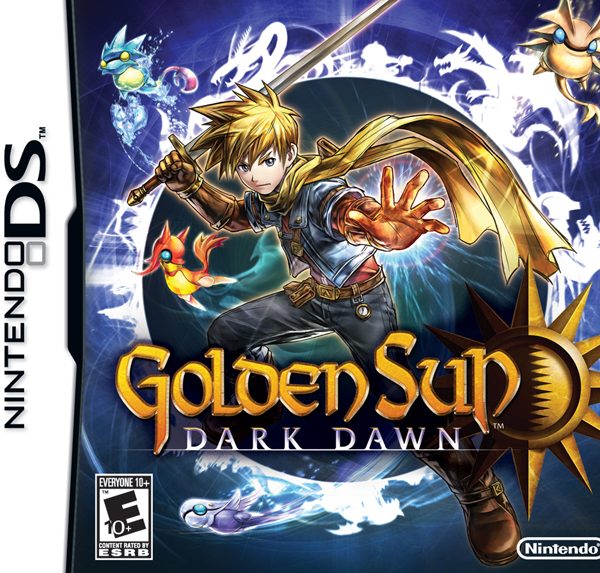 Ah, the Golden Sun series. If there was ever a series that had no idea what it was doing with all of the goods it had, it would be this one. Since it’s debut on the Game Boy Advance, the series has been an incoherent mess of ideas that never managed to come together. As time continues to march forward, people begin to realize how generic the series is. I know I am; nostalgia can only do so much. I’m still not sure what compelled to pop in the third entry, Golden Sun: Dark Dawn, into my portable. But, pop it in I did. I finished it and managed to have some bits of fun, but I won’t pretend that it’s a good game.

Golden Sun: Dark Dawn takes place 30 years after the events of the first two games. The advent of the Golden Sun has restored alchemy to the dying world of Weyard. The heroes from the first game live in fame and infamy. They also live with their children. Isaac’s son Matthew, Garet’s son Tyrell, and Ivan’s daughter Karis are hanging with Isaac and Garet when the game begins. While Matthew and Karis act as sane individuals, Tyrell decides to hop aboard Isaac’s flying apparatus. Naturally, Tyrell breaks it. The three youths need to find a feather to repair the machine. 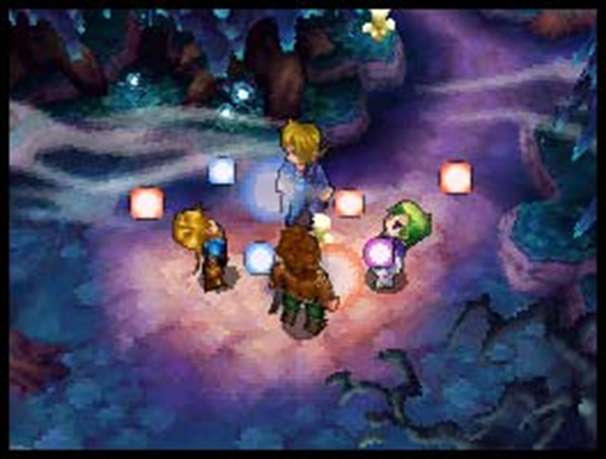 These guys wouldn’t be here if Tyrell didn’t act like a total idiot.

The story is a flop. Dark Dawn’s central focus revolves around finding a missing feather. Even if such a silly task wasn’t at the center of the game, Dark Dawn is constantly referencing the events from the first game. It feels like there’s zero identity in Dark Dawn. Your offspring band of heroes from Golden Sun act like carbon copies of their parents. While there are additional characters that join Matthew, they don’t get as much focus. Even with all of the game’s bloated dialogue (trust me, there’s a ton) the story or characters never go beyond what’s shown in the introduction. You know the term “mash A and win”? That’s what you can do with the game’s story sequences and not miss a thing. It’s frustrating because the Golden Sun series has the goods for a classic narrative. Dark Dawn failed to use any of them.

The story can be wholly ignored. So, you might be wondering what kept me going until the end. Was it the game play? Maybe. Exploring in Dark Dawn is standard stuff. Every town and dungeon has secrets that requires you to use Psi Energy. You’ll have to grow vines, put out fires, light torches, and more. But, these “puzzles” feel like busy work since they’re easy as pie to figure out. Are they worth “solving”? For the most part, the answer is yes because they will lead you to new treasure or new Djinni. Djinni are critters that grant your teammates new powers and boosted stats. These are fun to find, even if getting to them usually involves a mindless task. Aside from using Psi Energy, you and your team can buy gear, talk to folks, and rest at an inn. Inventory management is another pain because every character can only hold so much stuff. There is nowhere to store that one key item that was used during that one time.  You’re stuck with it for the entire game.

Battles aren’t much better. Aside from one early boss fight, Dark Dawn is one of the easiest games in the RPG genre. The battles are standard and turn-based; similar to the way things were on the Game Boy Advance. While your party of four can attack and use magic, most of the damage you do will come from using summons. To perform these, you need to use Djinni. Once enough Djinni have been used, you can unleash a summon. That’s about all the “strategy” you need. The good news is that battles move at a brisk pace and some of the summons look damn cool. 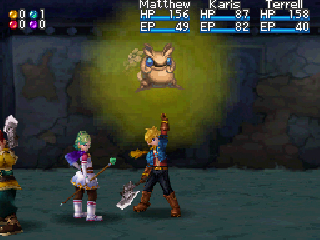 In fact, the game looks great when you’re in battle. Unfortunately, most of your time will be spent outside of it. This is another knock against the game. We all know that 3D graphics on the DS are ugly. Dark Dawn is no different. Characters look like blobs and the environments are a pain to navigate. I’m not sure why Camelot opted for this look. I always enjoyed the 2D presentation from the first two games. 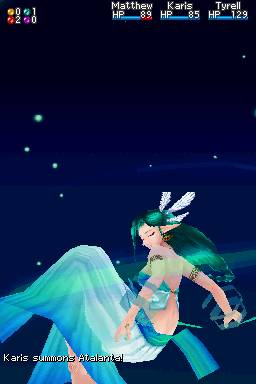 The summons are look damn cool.

What else? Ah yes, the music. That’s the one thing I have zero complaints about in Dark Dawn. Motoi Sakuraba, as usual, delivered an epic collection of tunes that are absolutely worth a listen outside of the game. Hell, you can just ignore the game and listen to the soundtrack if you want.

After about 20 hours, the game was finished.  There are some extra bosses you can fight, but I was done with the game after those credits were done. Looking back on it, I think I know why I bothered to play, much less finish, Golden Sun: Dark Dawn. Earlier this year, I finished Shining the Holy Ark. There was a time when Camelot knew how to make excellent games.  I thought that maybe, just maybe, some of that excellence would shine in Dark Dawn. It never did. A part of me is hopeful that there will come a time when this series gets it right. But, a bigger part of me realizes that this is a pipedream. Golden Sun: Dark Dawn proves that some series’ aren’t worth remembering. I can’t recommend this game to anyone.

Overall, 3/10 – Fond memories from the Game Boy Advance predecessors aren’t enough to save this game, and this series, from all of it’s faults. Don’t stare into Golden Sun: Dark Dawn.