I’ve been doing this for years but don’t ask me why. 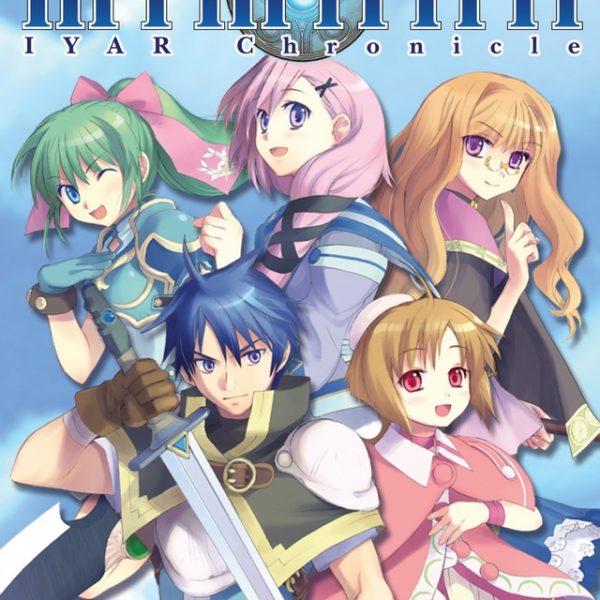 Author’s Note: This review was originally published on April 23rd, 2010. Similar to other reviews around this time, I used “witty” taglines to separate each section. These days, Mimana Iyar Chronicle is an expensive piece of merchandise. Hopefully, this review can prevent someone from wasting their money and time.

Mimana Iyar Chronicle is a PSP RPG that somehow slipped under my radar until a week before it’s release. As a gamer, I felt ashamed for not keeping up with this anime fantasy. So, on day one I picked it up and have to say that I was less than impressed. Mimana Iyar Chronicle is not a bad game, but there are many better. What kept me playing until the end? The characters and their interaction in the wonderful script. If you don’t mind a generic plot, annoyingly random battles, a lackluster combat system, and dungeon spelunking that needs some polish, then check out this game for some of the best character development ever seen in an RPG.

Troubadour Trouble.
In the world of Iyar, the sell-sword Crais Sewell is down on his luck. After losing a ton of money gambling, he takes a job from the mercenary’s guild to protect a young performer named Sophie Rothorn. Sophie wishes to find seven mystic gems scattered throughout Iyar and needs Crais to act as a bodyguard. While the job sounds easy, Crais hates kids and lets the world know this. In fact, he lets his client know this from the get-go. Surely, this hatred towards youth must stem from somewhere. It does, and you will learn about it and Sophie’s reason for the gems in this anime-inspired fantasy.

The thought of collecting seven gems may seem less than thrilling, but the characters who collect these are the game’s strongest point. Unfortunately, you are stuck with Sophie for a good chunk of this 20 hour adventure. Her goody-two-shoes attitude and incessantly chipper demeanor will grate on your last nerve. Then, Melrose joins you. She will go down in history as one of my favorite video game characters. Then, Tinon will join you and she will easily put a smile on your face. Then, Patty will join you and you will want to help her out of debt. One more lady joins you and then your party is complete. During the course of the game, you will have the opportunity to better know these girls and near the end of the game, you will get a special scene with one. Regardless of that, the interaction between them is brilliant. The things that these girls, as well as Crais, said throughout most of the adventure were some of the best quotes I have seen in a while. Unfortunately, not everything gets revealed to you by some of the characters and Crais goes from bad-ass kid hater to empathetic hero abruptly. That doesn’t stop the character interaction from being fun, though.

Missing the Map.
Mimana Iyar Chronicles plays like a dungeon crawler. The formula for these games is redundant. You have a destination, you find the gem in the destination, and you go back to town to learn about your next destination. The City of Florelmos acts as the home base for Crais and his friends. Here, you can shop for items, weapon enhancements and armor. You can also talk to the townsfolk to see their outlook on the current situation. Hitting the Select button will change your leading character and different NPCs say different things depending on who is in the lead. Hitting the Square button will open up a conversation between you and your characters, letting you know where to find your next destination. When you are prepared, you head off to the dungeon…

…which is where one of the game’s major problem lies. The initial dungeons were easy enough to navigate, but later in the game they were littered with twists, turns and holes. Having a mapping system in the game would have been a huge help, but instead you have to rely on your memory or a guide to get through some of these massive pieces of architecture. Crais may run at a brisk pace, but the dungeons felt endless at certain times. This was especially true when looking for a healing panel. Players can save the game anywhere, but these blue panels will completely recover your characters. The red panels will heal and let the party warp back to the beginning of the dungeon. After finding one, I would let out a sigh of relief because getting to them was a chore. Part of the reason was due to the dungeon design, and another part was due to the battle system.

Streets of Rage RPG.
In the many dungeons, you will fight many battles. The encounter rate in this game is too high. So high, that thoughts of the Morlia Gallery in Tales of Phantasia came back as I entered another battle after only five steps. Also, like Tales of Phantasia, you can only control Crais while the AI controls the rest of the party. Luckily, the settings for the AI can be tweaked to your liking with surprising flexibility. The battles take place in real time and have often been compared to Tales or Star Ocean. This is not the case at all. The best comparison would be to games like Streets of Rage or Bad Dudes. For those who are a younger crowd and have no idea what those games are, think of it as a game like Odin Sphere. Crais will move back and forth with the analogue stick and perform a three-hit combo with the X button. If you time your button presses right, you will do more damage. Crais can also equip four magic spells and skills assigned to the Square button and a direction on the D-Pad. Usually, Crais is better off sticking with the three-hit attack and a skill that involves his sword because his magic powers are on the lower side. While Crais attacks, the rest of the party will do the same or cast magic. With the exception of the first and last boss fight, Mimana Iyar Chronicle is easy as pie. Button mashing is a sure-fire way to victory. Since the battles are so redundant and easy, their frequency becomes a problem. They can be fun in small doses, but when you’re searching for the end of a dungeon, the last thing you want to do is encounter another party of enemies. When the battle ends, you will get money and experience points. Enough experience means you gain a level. At certain levels, your characters will learn a new magic spell. The battles are as basic as they come and their high encounter rate may be enough to turn away certain gamers.

Thousand Arms Portable.
For those of you who have played Thousand Arms, the graphic style will seem familiar. With the exception of the lovely portraits that accompany the conversations, Mimana Iyar Chronicle’s anime inspired world will bring gamers back to a simpler time with 2D sprites in a watercolor painted world. The sprites outside of battle are a bit basic, but in battle they are realistically proportioned and move with ease. A few extra frames for their animation would have helped them look less old-school, but they still get the job done. Some of the spells were impressive and certain bosses looked intimidating and anime enthusiasts will be happy to know that there are some well drawn animated movies in the game. The voice acting was done very well. The music may not be anything memorable, but an all-star cast voices each character perfectly. There was no option to switch to the Japanese voice acting, but the excellent acting by the cast makes up for that.

Iyar ‘s Lackluster Life
The cliffhanger ending of Mimana Iyar Chronicle leaves plenty of room for the rest of the tale to be told with future titles. Getting there will take you about 15 to 20 hours. Starting a new game will remove a level cap and allow you to have a relationship with a different girl. However, since the game can get so tedious so quickly, going back for more was not an option for me. Yes, this game has a great cast of characters, but everything else about it is lackluster. In small doses, it can easily satisfy your RPG craving until something else gets released. Also, those interested in trying an RPG that doesn’t sport the typical battle system may get some enjoyment from this title. For the rest, Mimana Iyar Chronicle is just another RPG for the PSP. I always believe that in any situation, if you are around the right people, even the dullest event can be fun. Unfortunately, even a great group of friends isn’t enough to save you from boredom. The same can be said for Mimana Iyar Chronicle. While there is a wonderful cast of characters with a great script, seeing all of it means you have to play all of the game. Chances are you’re not going to want to do that.