Reviews are opinions with heavy text. Here is my opinion.

I’ve been doing this for years but don’t ask me why. 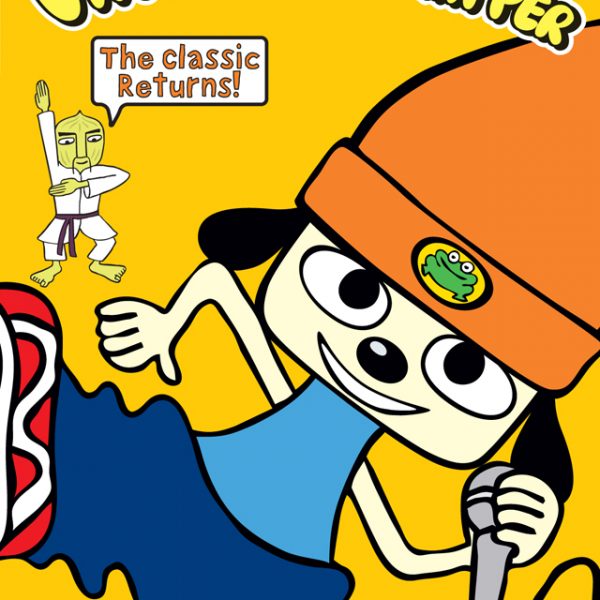 If you’re like me, then you probably remember seeing the commercials for PaRappa the Rapper when it was first released on the Sony PlayStation. After the commercial ended, you probably thought to yourself, “What kind of game is this?” And then, assuming you had a PlayStation or at least knew someone with one, you finally got the chance to see what the game was all about. PaRappa the Rapper was an original game back in the late 1990s and it’s still just memorable. The PSP version, released around the game’s tenth anniversary, is the perfect way to introduce new people to it. For those that have already played it, this is a great way to get hit by the nostalgia of the PlayStation era. If, however, you have had enough rapping for one lifetime, then you aren’t missing anything by ignoring this port.

The world of PaRappa the Rapper is a colorful one with all sorts of folks. Our hero is a floppy eared pooch named PaRappa. PaRappa enjoys spending time with his friends; most notably the daisy headed Sunny Funny. PaRappa is a shy but determined lad that wants to tell Sunny Funny how he truly feels about her. Throughout the course of the game, you will take control of PaRappa as he learns from his teachers the ways of martial arts, how to drive, how to bake, and more. All of this is for the sake of winning Sunny Funny’s heart. It’s an adorable story that is equal parts humorous and heartwarming. PaRappa’s motto of “I gotta believe!” will stick with you long after the game ends.

The goal of the game is to follow the raps of PaRappa’s teachers; similar to a musical version of Simon Says. First, the teacher will rap a verse. The bar at the top of the screen indicates the sequence of buttons that need to be pressed. During PaRappa’s turn, you need to press the same buttons with precise and accurate timing. The more precise and accurate you are, the higher your score. Your “life” and the layout of the stage are indicated by the U Rappin meter. When a stage begins, your meter is set at Good. If you make a mistake, the score ranking lower Good will flash. If you miss again, your meter will be set to Bad. This can continue once more to Awful. If this happens, you will get a game over and have to try the stage again. After completing the game once, you can attempt to freestyle the verses and move the U Rappin meter from Good to Cool. If you continue to rap well, the stage will transform and you will have free reign over PaRappa’s lyrics. This is the way to build up a huge score. It sounds simple, and during the first couple of stages, it is. Once you get further in PaRappa the Rapper, things get tricky. You will have to really listen to the lyrics as well as observe the order and timing of the button presses. Luckily, there is a practice mode you can access and most of the stages are relatively short.

Going back to that commercial, aside from wondering how to play PaRappa the Rapper, something else that piqued my interest was the unique visual style created by Rodney Alan Greenblat. The characters in PaRappa the Rapper are paper thin and 2D, but the setting is entirely in 3D. This unique choice, coupled with an avalanche of glorious colors make this one of the best looking and most inspiring games of all time. The graphics transitioned well to the PSP screen. The voice acting is great, even if the dubbing doesn’t always match the words. All characters sound great, and PaRappa’s soft but captivating voice is easy on the ears despite the upbeat and fun nature of the songs. Speaking of, the songs are guaranteed to get stuck in your head upon their completion. The PSP version allows you to access remixed versions of them if you attempt to play online.

The biggest problem with PaRappa the Rapper is the length. With only six stages, the game can be finished in about three to four hours. Much of that depends on skill, but with enough practice any stage can be completed. However, there is always a reason to play again. Besides the chance to free style while the U Rappin meter is set to Cool, finishing all stages on Cool will unlock a chance to play through the game as Sunny Funny and her band. Despite its short length, the PSP version allows you to pick up and play the game with ease. Fans of music games will undoubtedly enjoy the simple yet satisfying gameplay, the unique presentation, and the charming story. If you already played the game on the PlayStation and had your fill, then you won’t be missing anything by not playing the PSP version. For those that enjoyed their time with it and wish to reminisce, there is no better option than checking out this port.

Overall, 7.5/10: A classic through and through, despite being nothing more than a simple port.