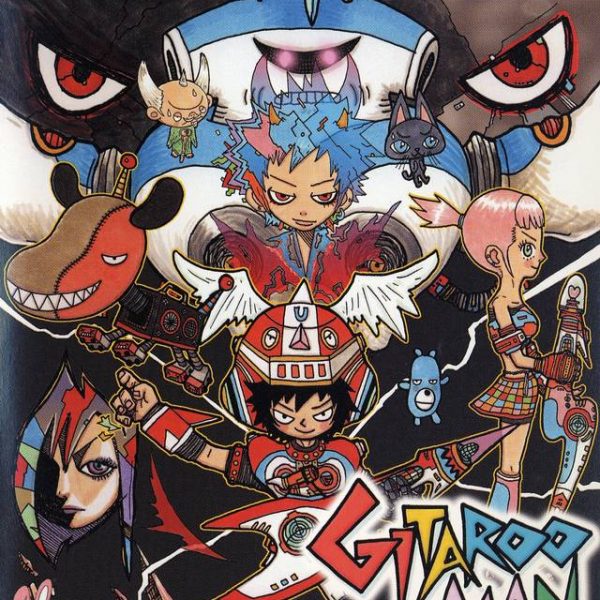 Much like your favorite song from previous decades, Gitaroo Man is a timeless rhythm game that personifies staying power. That’s the great thing about good music; it stays entertaining long after its release. It has been years since Gitaroo Man was quietly released on the PlayStation 2 and I’m still able to replay it. Furthermore, it still proves to be one of the most entertaining and challenging games in the rhythm genre. The chances of Gitaroo Man getting revamped for a modern console are slim. My hope with this review is to get at least one more person interested in playing this classic.

Gitaroo Man stars a young boy named U-1. U-1 is trying to live his best life: he has his eyes on a girl named Pico and he wants to become a popular skateboarder. Unfortunately, Pico is oblivious to U-1’s interest and U-1’s skateboarding is laughable. The game begins with U-1 returning home from another day of rejection from Pico and getting picked on by neighborhood bully Kazuya. Puma, U-1’s dog, decides to cheer him up by teaching him how to play the guitar. After the lesson, an ax wielding demon named Panpeus makes his way to U-1’s room. Puma transforms into a robotic version of himself and hurls a colorful guitar at U-1. This causes the boy to turn into the legendary Gitaroo Man, the wielder of the last known Gitaroo. Gitaroo Man needs to stop the Panpeus and the rest of the Gravillians from terrorizing the people of Planet Gitaroo. The story is fun and comical throughout the entire game. Much of it plays out in hilarious movies. Other times, you’ll see anime stills of U-1 where he ponders his current situation. The translation for these moments is slightly awkward, but they add a nice reprieve from the comical activity of the movies. As goofy as the story can be, it’s clear that you’ll be routing for U-1 the moment the game begins. Even if he wasn’t the legendary Gitaroo Man, he’d still serve as a solid leading character.

But, that’s not the case. Using the power of his Guitar Gitaroo, U-1 needs to collect the missing Gitaroos and stop the Gravillians from further terrorizing Planet Gitaroo. Gitaroo Man is divided into ten stages. In most of these stages, you will need to keep the rhythm as you perform musical battles against an opposing Gravillian. Gitaroo Man’s clever control scheme is easy to pick up and play. However, nailing a high grade takes practice, patience and endurance. There are three major phases in a stage. The Charge Phase has you accumulating energy to fill your life meter. The Attack Phase has you slamming on your Gitaroo as you deal damage to your opponent’s life meter. During both of these phases, you will be using the left analogue stick to move a fan to follow a moving line. This line is called the Trace Line. You can tell if you’re outside the line because it will turn from green to blue. The Trace Line has red sections called Phrase Bars. As you move along the Trace Line, you need to press and hold the circle button as soon as a Phrase Bar begins. When the Phrase Bar comes to an end, you have to let go of the circle button. It sounds simple, and it is. The challenge comes in when you need to keep up with the Trace Line and land the timing properly with each Phrase Bar. If you move outside the Trace Line and/or miss a press of the circle button, then you’ll get nailed with a Miss. When this happens in Charge Mode, you won’t gain energy. If this happens in Attack Mode, you both lose energy and you fail to damage your opponent. But, when your timing is on point and you start seeing “Great” and “Good” with every Phrase Bar, then you’ll rack up some major points. It’s a wonderful feeling going through a stage and jamming your way to victory. Another phase that occurs during most stages is the Guard Phase. Here, the four face buttons will head towards the center of the screen. When they reach the center, you need to hit them. Again, it’s a simple concept that really ramps up the challenge the further you get. Button icons will by flying at you at a brisk pace as you move from one stage to the next. If you miss a button, then you receive damage. After a certain point, you will reach the Harmony Phase where you start landing the final attacks. You can still take damage, but the end of the stage is in sight. Finishing the Harmony Phase initiates the End Phase, which means you’ve successfully made it through. After a stage ends, you’ll receive a grade and unlock some character bios and information. If at any time you lose all of your energy, you have to start the stage from the beginning. Is it frustrating to have to start over? Yes. But, as frustrating as it is to have to start a stage from its first bar, the game’s addictive nature will make you try again instead of turning off the console.

Obviously, Gitaroo Man’s music is fantastic. The soundtrack was developed by COIL, a Japanese rock group that went all out in creating a diverse, enjoyable collection of tunes. I won’t list my favorite tracks; I’ll let the music speak for itself. The graphics are an interesting blend of quirky cartoons and Japanese animation. The visual style is filled with every tint and hue of every color imaginable to create a visual fever dream feast. It’s this same level of creativity that brings me to one of the game’s issues. The graphics can become too much to handle. In other words, while you try to keep up with the Trace Line, you may end up being distracted by all of the stuff going on behind it. Sometimes, a slip-up can cause you to miss multiple Phrase Bars in a row. Reorienting yourself can be tricky. But, it’s not a deal breaker. Gitaroo Man’s presentation is a masterpiece from every angle.

Gitaroo Man is easy to learn, but difficult to master. It’s this level of accessibility that makes it so much fun to keep playing long after you finish the single player campaign. When you find a stage you especially enjoy, then chances are you’ll replay it over and over in order to get the highest score possible. While you can finish the main game in one afternoon, there are ways to increase your play time. A versus mode enters you into a rock battle with another person. If you have a multi-tap, then you can have a four person ballad battle. Master Mode is an enhanced version of the regular mode that unlocks after you finish the game once. If the name didn’t give it away, then let me tell you: it’s difficult. You’re looking at more damage received for misses, and you are looking at a much more slippery Trace Line. No matter your experience, Gitaroo Man has something to offer for every gamer. The accessible controls are ideal for folks that wish to enjoy a few rounds. The challenge of getting high scores and unlocking all of the game’s extras will appeal to those looking for something more difficult. Indeed, similar to the music medium, Gitaroo Man has something to offer to everyone.

Overall, 9/10: Music saves the day in Gitaroo Man. This is a fantastic and unique rhythm game that everyone can enjoy.