Forget what you’ve heard! Grandia Xtreme is the best of the bunch, sucka! 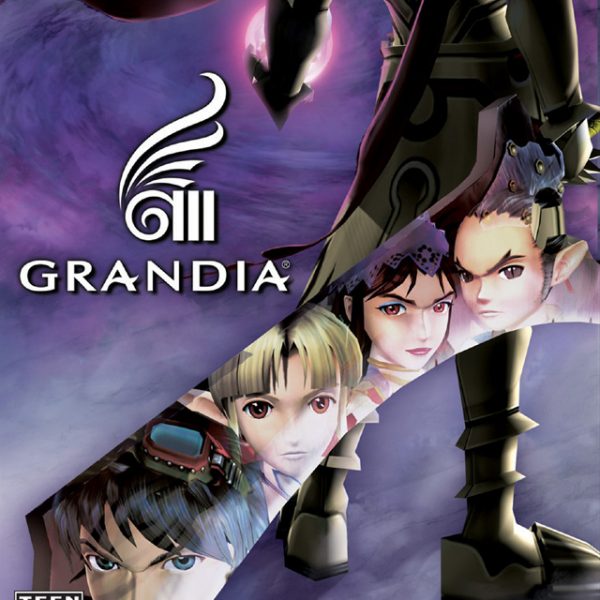 Author’s Note: This review was originally published on October 17th, 2006 and later updated on February 22nd, 2010.

I look at the Grandia games with a mixed feeling. I enjoyed the first one and the second one. I loved Grandia Xtreme. However, the series as a whole was missing certain aspects to make it epic. The end result of Grandia III was definitely not what I hoped for, however I am still glad that I gave it a try. If you’re looking for a quick, quirky, and sometimes quiescent game, then look no further than Grandia III.

The biggest disappointment in this game had to be the plot. The game stars Yuki, a rookie-pilot who dreams of flying in the sky as a legendary captain. In his quiet village of Anfog, he decides to test a plane he made in hopes of soaring across the ocean. Predictably, his plane crashes (mainly because his mother, Miranda, is hidden on board). During the crash, the two of them meet a mysterious girl named Alfina, who was on the run from a group of soldiers. This starts your quest to save the world. At first, I was hoping that the story would turn into something epic because that is what the game leads you to believe. However, near the second half of the first disc, I was super disappointed. As I continued to approach the end, things got worse and worse. The story was rushed, had no originality, and had some of the cheesiest events imaginable. Seriously, hearing someone say that the power of love will save the world really gets to you in this day and age.

Luckily, the characters that embark on this lame expedition have a bit more going for them. Yuki and Alfina fit the stereotypical hero and heroine, but characters like Alonso, Miranda and Dhana make the story a bit more enjoyable. However, the villains are an entirely different story. You learn absolutely nothing about half of the main villains, yet they pop up out of nowhere. Villains are a key part in any video game, and to have absolutely no back story about them makes conquering them far less enjoyable. A few cool main characters cannot make up for lame villains and an even lamer plot, especially one that promises a high-flying adventure.

Certain things make up for an RPG lacking a good story. First off, we have the graphics. This game is down-right gorgeous. From the thrilling opening FMV and the ones that follow in the plot, to the dazzling battle effects, not once were my eyes complaining. The camera can be a bit of a hassle at times in dungeons, but that’s hardly worth mentioning. Characters are gorgeously animated, show life-like facial expressions and were created with beautiful colors. Monsters, especially some of the bosses, are just as great. While a lot of them are the same model, just with a new color palette, their actual designs are imaginative. Graphically speaking, Grandia III delivers.

Next, there is the music and sound. Usually, a solid sound track helps with the game. I say usually because a killer soundtrack most certainly didn’t save Unlimited Saga from being the crap that it was. But, I digress. Most of the game’s story sequences are carried out with voice acting that was done exceptionally well. I don’t recall the dubbing ever being off. More importantly, we have an amazing sound track. While it reminds me a lot of Arc the Lad, there are plenty of original, ear-pleasing tracks. I liked them so much, I ordered the OST! From the exciting battle theme to the returning, and classic, Grandia dinner theme, the music department delivers.

Before I talk about the most important thing in this RPG, the battles, I will mention the stuff you can do outside the dungeons. Staying true to its predecessors, Grandia III has plenty of colorful townsfolk for your interaction. This is actually a bittersweet feature. Since the story is so rushed, talking to NPCs is a way that reveals important information about the story and characters. However, there are RPG players that dislike talking to everyone in town and doing this in Grandia III will cause you to miss out on some important story information. I have no clue why Game Arts pulled this stunt, but they did. Probably the greatest thing you can do in town is shop. Besides buying weapons and armor, you can buy skills and magic for your characters. This gives you a plentiful amount of customization options for your team, especially considering that there are so many skills and spells to learn. Mana eggs once again make their return, and this time you can fuse them together to make them a stronger mana egg. I really enjoyed giving my characters skills and spells to make them more powerful. Customization is always fun in an RPG and Grandia III pulls through in this department.

Finally, a fun battle system EASILY makes up for a lack of story. In Grandia III, this is how I felt most of the time. Grandia is best known for their great battle systems, and luckily Grandia III is no different. You encounter your enemies on screen, and this time you can press a button to slash your sword and knock the foe off balance. Then, you touch the foe to start the battle with a bit more initiative. Like other Grandia games, if the enemy touches your back, you get surprised. The battle starts with your characters and some monsters placed randomly on a field. The Grandia III battle system features a circle on which both characters and monsters, represented by icons, rotate around. When they reach a certain point, your characters are able to choose an action. They can do a combo attack, a critical attack which doubles as a cancellation move, use an item, use magic, flee, defend, or use one of their special skills. Once an action is chosen, depending on what it is, the icon will move to another portion of the circle. When it reaches said portion, the person will act. As per usual, battles become super chaotic very quickly. Time freezes for your character when an action is being selected, but once everyone has selected something to do, battles become buck-wild. This Grandia trademark is what kept me going. Battles are fun as hell, and there are some new features added to them.

Each character learns a unique set of skills. These special skills have been granted some upgrades. Learning these skills happens when you select to do a regular attack. The character will say something like, “I got it!” and use their new found skill. This happens as the characters skill level goes up from gaining levels. Consistent use of the skills will power them up in various ways; such as quicker execution and more power. A feature added to the game that makes the game more challenging is that skill points (SP) do not get recovered by staying at an inn. Instead, taking damage, giving damage, and certain items recover them. If you finish the battle unscathed, you get back 10% of your SP back. Finally, the SP recovers slowly over time as your characters wait for their turn to come up. This adds a new level of strategy to the game due to skills being so powerful. Certain skills have a cancel effect, so when used properly you can easily turn the tides of even the most difficult of battles.

My favorite part of the battle system is the aerial combo. When you knock a foe into the air with an attack, and follow it up with another character’s combo attack, you are treated to a stylish aerial combo attack. When chained together, the enemies don’t stand a chance. Each character has a unique aerial combo, so it’s always fun to experiment. Aerial combos also allow you to gain rare items from the enemies. Unfortunately, aerial combos lose their power later in the game. Near the end of the game, the battles don’t get harder like they do in other RPGs. Instead, the enemies, both regular and bosses, get insane amounts of energy. Hell, the last boss took me 40 minutes just because he had so much HP. Needless to say, this game is relatively easy. They’re a couple of challenging enemies, but overall I had no trouble with this game. However, I wasn’t necessarily looking for a challenge because I had a blast with the battles…while they lasted.

Translation: the game is short. Yes, it is two discs long but it still lasted me only 25 hours. This is after getting the best mana eggs, the best skills, and the best items. There are no side-quests or optional bosses and no new game plus features for your efforts after beating the game a first time. There is no foreshadowing in the plot that would make you want to re-live the story. Like the other Grandia games, this game is very linear, holding you by the hand and telling you where to go next. Coupled with the short playing time is a very lame and rushed plot that makes this game not as epic as intended. Even though the battles were a total blast, I was really hoping for a better story than the one that was given; at times I felt that even the fun battles could not save the game. I know that I said that battles in RPGs are the key factor, but a good story helps too. A story that is not rushed, more interesting characters, and plenty to do outside of the main plot would have made Grandia III…well…grand. To sum up, I had a fun time with Grandia III while it lasted, however the story-line needed a drastic make over for it to be fully enjoyable in its entirety.