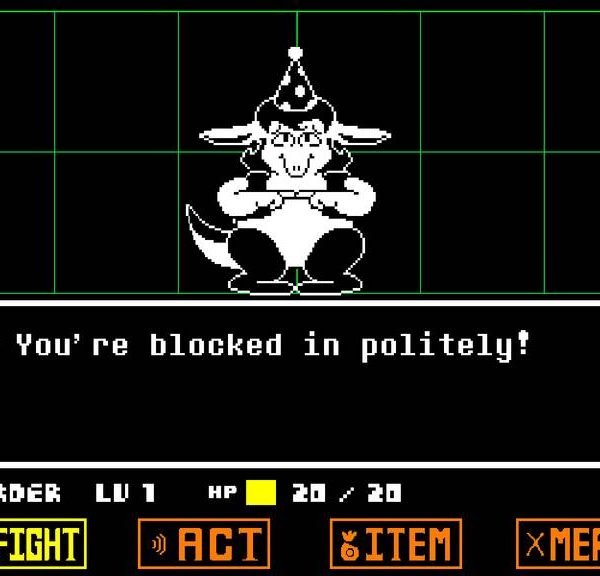 Near the end of 2015, GameFAQs held another Best Game Ever contest. Most of us thought that this would be another instance to show the overrated popularity of the Zelda franchise. In a strange twist of fanboyism, Zelda didn’t win. Instead, the winner of the contest was Undertale, an indie RPG that took a new approach to storytelling, combat and style. Personally, I didn’t have a horse in the race since these contests hold zero ground or validity. But, I was pleased to see something that wasn’t a Zelda title win. Years went on and, eventually, Undertale received a physical release. I wanted to see what the fuss was about, especially after some friends said that I was in for an experience unlike any other. Undertale has a great narrative, but having to play the game to experience it is where the problems lie. Undertale is good for the page, but not good for the stage.

Undertale takes place in a world beneath the world’s surface. Down here, monsters live with one another in peace after losing a war against humans. You take control of a child who awakens in this world. The first thing this child sees is a sentient flower named Flowey. Flowey attempts to kill your character, but you are rescued by another monster named Toriel. Toriel wants to protect you since you’re the first human she’s seen in quite some time, but this world is not your home. It’s up to you to figure out a way to get back to the surface, but there’s much more going on this world than meets the eye. Despite its innocent appearance and relevant humor, Undertale’s story will take dark, unsettling turns the further you get. Undertale’s story is its best feature because this strange underworld is filled with well-written characters, personalities, cultures, and history. While your character is a silent protagonist, the rest of the characters do enough talking and have enough personality to break that silence.

Your time in Undertale is spent moving from one area to the next, solving simple puzzles, chatting with important characters that will give you the skinny about their world, and dealing with both random encounters and story encounters. Outside of combat, game play is straightforward. You can find items, explore objects, and shop for supplies. Combat is a bit more involved. Unfortunately, it’s also the game’s worst feature. One issue is that the encounter rate is high. I’m used to random encounters, but encounters in other games usually take less time than a typical battle in Undertale. On the battle screen, your character is represented by a red heart that you’re able to move around in a small square. Taking inspiration from shmup or bullet hell, an enemy’s turn is spent throwing various projectiles at your heart. Avoiding them is simple at first, but later encounters get tricky and lead to frustration. Some battles, namely boss encounters, are a little different than the above described. During your turn, you have some options at your disposal. The Fight command requires you to time hits on a meter to land as much damage as possible. Simple stuff, especially later on when you start to acquire better equipment. Your character will grow in power very quickly. However, there are other commands available to the player. The first is Item, which lets you use something from your inventory. Another is Spare/Flee. This lets you spare an enemy’s life or lets you flee from the battle. The command that tends to be given the most praise is Act.

Depending on the monster, you will be given various options when you select Act. The right set of actions will let you end the battle peacefully. You won’t earn EXP, but you will walk away with money. During most boss battles, you will need to not only perform an Act, but outlast their dialogue options until the correct Act choice is available. It’s a puzzle trying to figure out the right actions to perform in order to spare monsters. It starts as a clever gimmick, but the frequent encounters and brutality of bosses causes it to wear out its welcome. Some of you might be thinking it’d be better to simply fight every enemy and move on. The problem with doing this means that you end up locking yourself out of the best ending. Indeed, killing just one foe locks you out of the game’s best (also known as “pacifist) ending, which is one of Undertale’s biggest claims to fame. To put it another way, I’ll reference one of my favorite games: Valkyrie Profile. Playing Valkyrie Profile normally causes you to get the B Ending, which is regarded as boring and anticlimactic. Taking the extra effort to get the A Ending gives you the canon, and makes the adventure to get there much more enjoyable. In Undertale, getting the standard ending leaves you without any sense of accomplishment. To get the best ending, players cannot kill one monster during the entire journey. Unlike Valkyrie Profile, however, Undertale’s requirements aren’t fun. While the canon is interesting, only a few will appreciate all you have to do get to it.

Two things I really appreciated from the moment I began Undertale were its graphics and its music. This appreciation carried on until the very end. The visuals are a throwback to the 8-bit era of gaming when sprites were simple, colors were limited, and environments were just the right size. In Undertale, that 8-bit style gets amplified due to well-drawn animations, creative locales and locations, and extra colors. Originally on the PC, this version on the PlayStation Vita looks great. The style works well, too. The music has tunes that range from serene to jazzy to exciting to terrifying. In fact, I would go as far to say that the music is the best thing about Undertale. The game lacks voice acting, but there is a plethora of unique sound effects and blips that give characters their own sense of “voice.” A few of these sound blips are unpleasant, (Mettaton and Papyrus, for example) but most serve their purpose well.

Another aspect of Undertale that I appreciate is that it doesn’t take long to finish. Going through the game twice (once on a blind playthrough, and once to unlock the “pacifist” ending) I only logged about eight hours of game time. Was the struggle to get to that end worth it? It’s hard to say. Overall, I didn’t enjoy playing Undertale. However, I did enjoy learning about its lore. I will say this: everyone that considers themselves a fan of RPGs should try Undertale. Even if the combat or some of its other features don’t pull you in, it’s easy to blaze through the game no matter what type of playstyle you have. One final thing to point out is that Undertale has a third ending labeled the “genocide” ending. Those that decide to participate in this will be looking at more play time, but I won’t go into the details of why. I’m glad I finally had a chance to sit down with Undertale in order to see what the fuss was about. I won’t be playing it again, nor will I be praising it. And, if for some reason it gets nominated for another Best Game Ever contest, my vote will go to its opponent.

Overall, 5.5/10: Undertale’s story is worth experiencing, but playing the game makes it tedious and aggravating to enjoy said story.