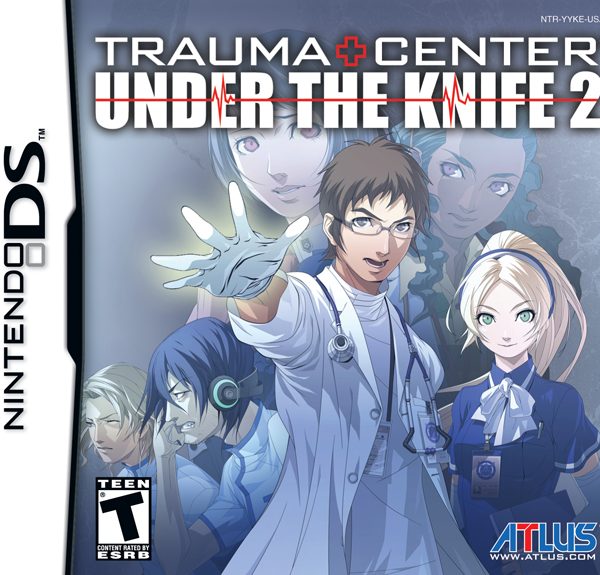 From the start, one thing is clear: the game looks better than its predecessor thanks to a new art direction. Derek doesn’t look like a goofy college kid, but a seasoned professional. Angie doesn’t look like a raging lunatic, but a headstrong nurse. The 3D operations are more detailed. Note that they still have that same level of viscera that the squeamish may wish to avoid. Everything from the static portraits to the operations better utilize the DS’ graphical capabilities. The music is a slight upgrade. Some of the tracks are surprisingly catchy despite the circumstances of having a patient’s life on the line. But, the soundtrack on the whole is limited. This means lots of repetition. During the story events, there will be times when the characters will vocalize a quip or a phrase. This minimal voice acting works for the game.

Trauma Center: Under the Knife 2 takes place three years after the first game. Derek and Angie have been sent to the African nation of Costigar to help treat patients dealing with the aftermath of a war. During their stay, the two are joined by a native doctor named Adel Tulba. Things move along without drama while in Africa. Eventually, Caduceus summons the two back to the states. Suspicious symptoms similar to the man-made disease GUILT have been showing up in a few patients. Adel decides to join them.

So, has GUILT returned? That question is the focus of Trauma Center: Under the Knife 2. Just like before, you’ll be spending time reading visual novel story sequences when you’re not performing surgery. One of my biggest problems with the first game was the cheesy dialogue that would get used to make a situation more dramatic than it actually was. Sadly, that issue didn’t get fixed. Some of the conversations will trigger an eye roll or two. One pivotal event near the end of the game reads like an after-school special. Despite this, this new plot has more intrigue and mystery. It makes the cheesiness worth enduring.

If you’re not reading, then you are operating. Once again, players take control of Derek as he operates on something as simple as a fractured limb to heart catheter insertion. Using the stylus, players will select a surgical tool from either side of the touch screen in order to proceed with the operation. Each operation is different. You might be draining a tumor of fluid with the drain, then cutting it out with the scalpel, then using the forceps to merge the healthy tissue, and finally using the sutures to sew the wound. Or, you might be using special fluid to graft skin, cut it from the template, place it on the patient, and apply ointment. The variety is there, but along with this variety comes that infamous difficulty. Under the Knife 2 is a difficult game. You’ll face seemingly impossible odds and conditions more often than not. You’ll get a game over, but you’ll grit your teeth (maybe swear a few times – depends on the operation) and try again.

Despite the brutality, the controls feel much more responsive. The operation difficulty can be mercifully adjusted between Easy, Normal or Hard. Of course, Derek’s Healing Touch is back. If things are looking grim, then Derek can invoke the Healing Touch to slow down time for some breathing room. Once you finish an operation, you’ll get a ranking. The game will automatically save your progress and carry on with the story. Previous operations can be revisited at any time for a chance to get a better score. Under the Knife 2 is difficult, but that feeling of satisfaction  you get after saving a patient from a dire situation makes the struggles worth it.

Overall, 8/10 – Dr. Derek Stiles and his crew are back in a more polished, more enjoyable surgical sequel with Trauma Center: Under the Knife 2.