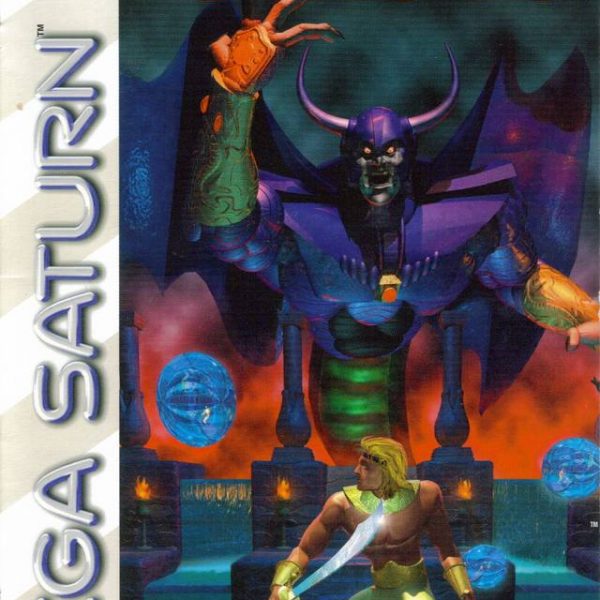 Nearly every time I try a new Sega Saturn title, I’m amazed by the level of care that got put into it. Was it a perfect creation? Of course not. Did the developers try to make it perfect? Absolutely. The Legend of Oasis is another example of this. This Saturn gem serves as a prequel to the Sega Genesis’ Beyond Oasis. You can hop into this title without any knowledge of the series.

The Legend of Oasis starts in the city of Aquaria. Situated above a world filled with danger, Aquaria is a small but pleasant paradise of a city. You play as a warrior named Leon who is destined to become the next Spirit King. After receiving the Golden Armlet from his mentor, Ordan, Leon needs to find six elemental spirits before a wizard named Agito unlocks the powers of his Silver Armlet. The Legend of Oasis has the trappings of a classic tale. Sadly, story and dialogue are barren. In fact, the majority of the dialogue comes from the townsfolk of Aquaria. They always have something new to say depending on the current situation. While some of their language was lost in translation, chatting with the locals is  an enjoyable way to fill the silence.

Perhaps acting as a reflection to the game’s minimal dialogue, The Legend of Oasis’ music is barren. It’s my least favorite aspect of the game. You’ll hear a quiet, unfitting ditty throughout the majority of the journey. Sure, there’s some boss battle music and a unique dungeon track tossed in, but most of the time you’ll be hearing the same thing. I actually ended up muting the television more times than I would have liked. It wasn’t because the music was bad. No, it was mainly due to the sound effects. Every enemy in this game makes a sound that will get repeated over and over until you move screens or kill it. When the screen gets filled with zombies groaning and/or giant golems screeching, the mute button comes as a sweet release.

This review is starting to sound negative. I promise you, The Legend of Oasis is worth your time despite the bare-bones story and questionable audio. The moment you begin, your eyes will widen as you witness the beauty of the game’s presentation. The power of the 2D sprite is in full force. The Legend of Oasis is stunning. I spent nearly an hour moving Leon around so I could ogle his animations. After that, I just absorbed as much as I could of Aquaria. Every location, enemy, spell effect, plant, river, and any other noun you can think of is displayed in gorgeous, crisp, vivid and colorful 2D. I could go on. The graphics are easily my favorite aspect of The Legend of Oasis.

Gameplay isn’t too far behind. The Legend of Oasis is a true-blue action RPG. Leon will journey throughout the world of Oasis fighting enemies, solving puzzles, acquiring new weapons and freeing the elemental spirits. Leon is a capable warrior that can jump, dash, roll, and duck around a world filled with fiends. Along his journey, he’ll have tools that can assist him. The first is a set of weapons. He’ll acquire a short sword, a long sword, a bow and arrow, and a rod. Each weapon has unique attacks that can be executed via special inputs. This really keeps the gameplay fresh. And, that’s just the beginning. The real fun shows up when Leon gains the aid of a new spirit. Once a spirit is acquired, he or she can be summoned by firing a magic sphere at a designated object. So, if you need the assistance from the water spirit Dytto, you can summon her from lakes, rivers, ice, and other watery objects. You can summon the spirit of sound, Brass, by firing a sphere at metallic surfaces. With a spirit following Leon, his magic meter will slowly drain. Each spirit has their own unique maneuvers which are used to deal with opposing forces or puzzles. With all of this in mind, it’s important to keep an eye on your magic meter so you don’t run out of juice.

Luckily, Oasis is filled with magic circles and foodstuffs that will allow Leon to recover his energy. One of the game’s more interesting features is the way it handles Leon’s level. Continuous use of magic means a slow but steady increase of Leon’s magic meter. Taking damage and recovering said damage means Leon’s energy meter will Rank Up. Higher rank means a higher meter. However, after you finish the game, you’ll be judged based on how high your ranking is. Similar to golf, a higher rank means a lower score. This doesn’t serve anything other than bragging rights, but it’s an interesting idea.

Alongside your rank, you’ll be judged on how many secret items you discover, the time it took you to destroy Agito, and the number of enemies you killed. All of this means that The Legend of Oasis gives players incentive to replay the game. The game is short; even with all of the secrets you can find it can be finished in about 15 hours. Some moments in the game can be challenging; mainly swarms of enemies or bosses with wide-screen attacks. But, even these hurdles aren’t much to overcome thanks to a hefty supply of save points. It took me over two decades, but I’m glad I had a chance to sit down and go through The Legend of Oasis. At the time of writing this review, the Sega Genesis Mini console is hot on the market. One of the games included in it is Beyond Oasis. I have a feeling I’ll appreciate that game more now that I got a taste of the Oasis world. No matter your familiarity, check out The Legend of Oasis. It’s more proof that the Sega Saturn had some amazing titles in its library.

Overall, 8/10 – The Legend of Oasis is lacking in narrative and music, but it makes up for it everywhere else. This is a solid adventure that exemplifies Sega Saturn gaming.