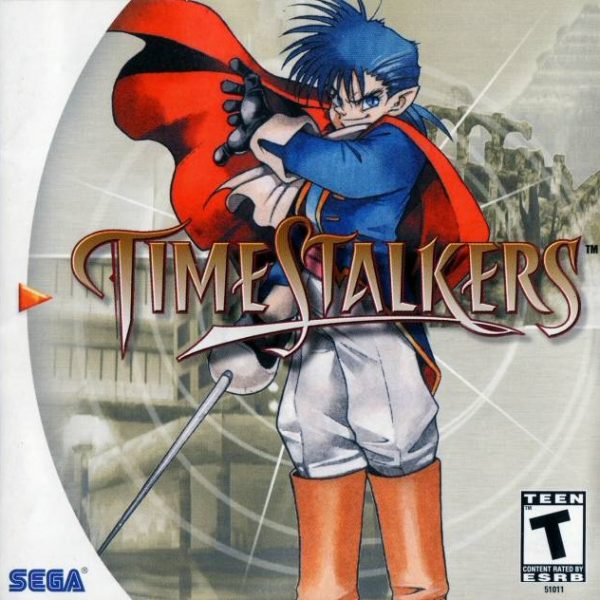 Nearly every time I decide to dust off the Dreamcast and try a new game, I am pleasantly surprised by the results. Having another RPG craving, I decided to take the plunge with a game that seemed to get more than its fair share of negativity. While not as grand as Grandia II or as sky-high as Skies of Arcadia, Time Stalkers (known as Climax Landers in Japan) is a story driven, crossover, rogue-like that is rough around the edges, yet has some redeeming qualities that make it easy to get into and tough to put down.

To begin, I think it’s important to talk about the best feature of Time Stalkers: its soundtrack. The music by Hiroshi Kondo is fantastic. Each track is catchy as hell and will have you humming or tapping your feet along to the music. A variety of instruments from all families make a soundtrack that is equal parts pleasant, exciting and unforgettable. Even if playing Time Stalkers doesn’t end up being your favorite thing, be sure to give the music a listen. Similarly, the presentation is another highlight of the game. I have always enjoyed the way the Dreamcast outputs 3D graphics and Time Stalkers is a perfect example of this. They’re not the most detailed, nor are they the most polished. Some of the dungeons look bland and the enemy designs look even more generic. Despite this, Time Stalkers is still a great looking game. The characters are colorfully designed and are as expressive as their outrageous, anime inspired outfits. Fans of Land Stalker, Lady Stalker and Shining in the Darkness will be excited to see how some of their favorite characters turned out in the third dimension. With character art by Hidehiro Yoshida, Time Stalkers has the look of a Climax Entertainment title on a modern-ish console.

Now, you might be thinking that if the best things going for Time Stalkers are its music and graphics, then the rest of the stuff must start plummeting downwards. In some ways it does, but just before it hits rock bottom it manages to pick itself back up. The story of Time Stalkers leaves a lot to be desired, as is typical with most crossover titles. The hero of this tale is a swordsman for hire named…wait for it…Sword. His awful name aside, Sword is a brash and arrogant mercenary that we learn absolutely nothing about. At the request of a nameless girl, Sword *sigh* enters a mysterious clock tower. At the end of the clock tower he opens a book. A flash of light and a teleportation spell later, Sword finds himself in a strange world that is composed of a variety of mini worlds. The clock tower has joined with a town square, which has joined a cartoony house, which also joins to a volcano. In other words, this world of distorted time and space is messed up. Sword learns that he needs to become this world’s new hero; something he begrudgingly accepts if it means he gets to return to his world. The story itself is about what you would expect with a crossover title: you’ll probably figure out the truth behind the world after the first couple of hours.

It’s a real shame that Sword didn’t get more development. His jerky attitude must have stemmed from somewhere, but we never learn a thing about it. We never learn about the girl who asked him to investigate the abandoned clock tower. Characters that don’t come from other games like Rao and Marion get just as little development. The other characters that join Sword are Nigel from Land Stalker, Lady from Lady Stalker and Pyra from Shining in the Darkness. Those that are familiar with their respective games will know more about them than is revealed in Time Stalkers. On the other hand, the world in Time Stalkers has a huge roster of NPCs that always have something to say about the situation. There is tons of dialogue, but none of it is about Sword’s history. But, as is typical with both crossovers and rogue-likes, the majority of your time in Time Stalkers will be in the dungeons.

Only one main character can enter a dungeon. The dungeons are randomly generated and full of hidden items and traps. As you navigate through the rooms, you’ll also see monsters. Unlike other rogue-likes, Time Stalkers features a turn-based battle system that will feel familiar to anyone that has the slightest experience with the RPG genre. Your character can attack, use magic, use items, and defend. As they start leveling up, they’ll learn more spells. When the battle ends the monsters disappear for a while. Speaking of which, a key feature is the ability to capture monsters. Your character can be accompanied by two monsters in battle and can hold up to eight at a time. Once you find the floor’s exit, you can move onto the next floor. Before doing so, you can distribute points earned from leveling up to your stats. You can also set up your party of monsters. Each dungeon ends with a boss fight. Exiting the dungeons will usually grant your character a new title. Depending on the title, you character will permanently learn new spells or passive skills. Like most games in the genre, leaving the dungeon resets your levels back to one. But, unlike most games in the genre, Time Stalkers is ridiculously easy. Rogue-likes are known for their soul crushing difficulty, but Time Stalkers could leave die-hard fans of the genre craving a challenge. Not once was I worried about a game over. I only had cursed equipment one time. I always had plenty of space for items. In some ways, this is a great way to introduce people to randomly generated nature of the genre.

I don’t mind the easy difficulty, but there are things I would like to change. The first thing I would do is nix the fact that you can only use one main character at a time that gets joined by monsters. The story explains why only one person can enter a dungeon at a time, but it doesn’t change the fact that you can go through nearly the entire game as Sword and not give the other characters any chance. A party of Sword, Nigel and Pyra would have made the adventures through these dungeons more exciting. Another change would have been to give the dungeons more features. Traps, items and restoration rooms are a good start but they don’t feel substantial. Finally, there is a random chance that the character Marion will join you. While she’s not needed to see the end of the story, finding a random item in an already randomly generated dungeon is a ridiculous requirement.

The biggest issue with Time Stalkers is the length. It’s possible to replay the dungeons as many times as you want to earn new titles. You can also take on side-quests from a deranged looking bunny named Noiman. However, if you follow the story from start to finish the game is easy to complete anywhere from ten to fifteen hours. Each character has their own ending, but in this modern age it’s easy to see any of them that you missed. Obviously, Time Stalkers is far from the greatness of Grandia II and Skies of Arcadia. But, there is something fun and charming about Time Stalkers and its simplicity. I never stopped having fun with the adventure. To me, that’s the most important feature in a video game. Throw in a topnotch soundtrack and some great graphics, and you have another RPG on the Dreamcast that I recommend.

Overall, 7/10: Time Stalkers mixes the simplest parts of a crossover, a rogue-like and a traditional RPG. It’s lacking in some areas, but it makes up for it in others.