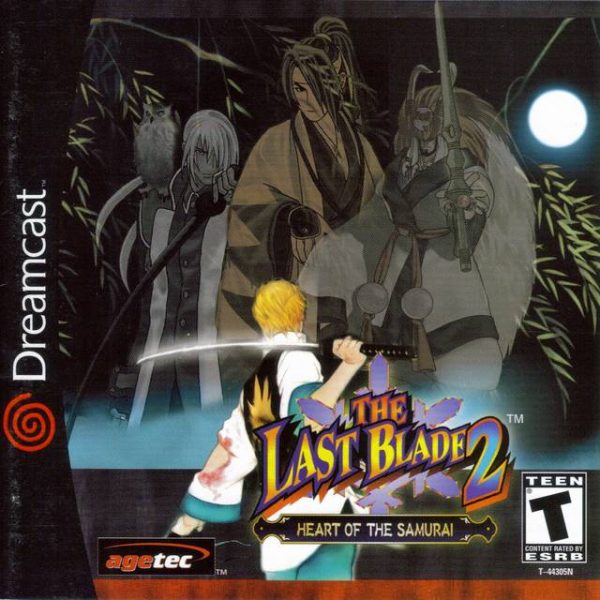 My favorite fighting game series is Guilty Gear. Even though I stick with what I know, I think it’s important to dabble in a variety of other fighters. The list ranges from well-known titles like Mortal Kombat II to lesser known arcade only games such as Martial Champion. One of the more retro yet loved franchises that I enjoy is Samurai Showdown. Taking place in ancient Japan with some of the coolest warriors inspired by anime, nothing was more satisfying than slashing your opponent to bits in this over-the-top fighter. I recently learned about Samurai Showdown’s spiritual successor: The Last Blade. While I have yet to check out the first title, I had the opportunity to dust off my Dreamcast a few days after its anniversary and check out The Last Blade 2. Despite being 15 years old and lacking certain technologies of other 2D fighting games, The Last Blade 2 is an impressive and fun fighter that I recommend to all SNK fans.

The Last Blade 2 takes place after the events of the first game during Japan’s Bakumatsu era. A warrior named Kagami attempted to put an end to the human race, but he was stopped by mighty samurai, ninja, and martial artists from Asia. Now, a mysterious figure named Kouryu is picking up where Kagami left off. The folks from The Last Blade as well as some new faces need to stop him from having his way. What The Last Blade 2 lacks in terms of story, it makes up for in characters and setting. Some of the characters are loosely based off of an actual historical figure from Japanese lore or mythology. My favorite is Setsuna, a no-nonsense underworld representative that only wishes to destroy his opponent. Other fun characters include the naginata wielding Yuki, the mischievous shrine maiden Akari and the ninja Zantetsu. That last one is especially fun because, despite being a ninja and wielding wakizashi, he wears clothes that no ninja would be caught dead with. I think that over the top style given to the characters and their backstories is what makes The Last Blade 2’s plot so captivating.

As a 2D fighter, The Last Blade 2 feels like it’s between basic and complex. After selecting your character, you can select one of three modes for them. While their moves remain the same, their strengths and weaknesses will be changed. Power Mode makes your attacks have more force and allows you to perform a unique ability after charging a bar at the bottom of the screen. Speed Mode might lack the oomph of Power Mode, but characters can perform combos and use the energy from their bar to unleash a flurry of hits. New to The Last Blade 2 is EX Mode. In this mode, characters gain benefits from both Power and Speed Modes, but the damage received is much higher. I find this feature really enjoyable because it lets you play your favorite character the way you want. If you like heavy hitters like Shizen, you can put him in Speed Mode and still have the potential to perform combos. Similarly, faster characters like Hibiki can make up for their lack of strength with Power Mode.

Once you select a mode, the fight begins. Characters can perform a weak slash, a strong slash, a kick and a variety of special attacks that require proper button inputs. Another unique feature of The Last Blade 2 is that you can deflect an enemy’s blow with the push of a button. If successful, this means you will be able to land some free hits on them as they stagger and attempt to recover themselves. All of the characters have the types of moves you’d expect from SNK such as fireballs, uppercuts and multi-hitters. Unfortunately, sometimes pulling them off can be tricky due to the Dreamcast’s stiff control pad. You aren’t able to use the joystick to control your characters. This means that, after a fair amount of playing, you will be left with a sore thumb and some slight frustration due to the pad being difficult to work with. Many of the more powerful moves require more directional combinations, so pulling them off can be a challenge. On the other hand, you can usually get by with the most basic moves. Even though The Last Blade 2 comes from the creators of King of Fighters, the standard difficulty setting in The Last Blade 2 feels slightly lesser than usual. This can be a good or a bad thing, depending on your point of view. Even with the stiff control pad, The Last Blade 2 has a lot to offer. Alongside Story Mode, you can adjust the settings, hone your skills in Training Mode, or look at a stunning collection of art. Time Attack Mode has you going blade to blade with as many characters as possible before a time limit expires. As you finish each character’s story, you will be able to re-watch their story segments. And of course, there is a two-player Versus Mode in case you want to bring a friend into the action.

The Last Blade 2’s graphics are a dream come true for fans of 2D fighting fans. Each character has an inspired, colorful look that will change palettes depending on which mode you select for them. The special attacks are equally fun to view. My only complaint about the graphics is that the battle environments aren’t as memorable. A good battlefield isn’t essential in a 2D fighter, but they can add to the experience. The music in The Last Blade 2 ranges from boring to above average. All these years later, I’m still able to recall song of my favorite songs from Samurai Showdown. After playing through The Last Blade 2, I still can’t recall any tracks. Again, it isn’t essential to have solid music in a fighting game, but it is another facet that can add to the experience. Of course, I might be slightly spoiled by all of the head-banging magic from the Guilty Gear series.

The Last Blade 2 is a fun fighter that is easy to recommend to fans of the genre. However, its price tag may not seem worth it to some. Despite having a fair amount of options, The Last Blade 2’s content isn’t as hefty as it is in other fighting games. While there are some secret characters to unlock and mastering most of the roster can take some time, The Last Blade 2 has a hard time competing with more modern titles in terms of content. Also, playing with the Dreamcast’s control pad can be extremely taxing on your thumb. If you do seek out this game, I recommend investing in a joystick. Complaints aside, I have to say that The Last Blade 2 is quite the surprise. It has a varied roster, a great setting, some crazy combat options and some neat stuff to unlock. Since playing it, I’m even more interested in seeking out a copy of the first game so I can see the origins behind the characters and take another step into ancient Japan.