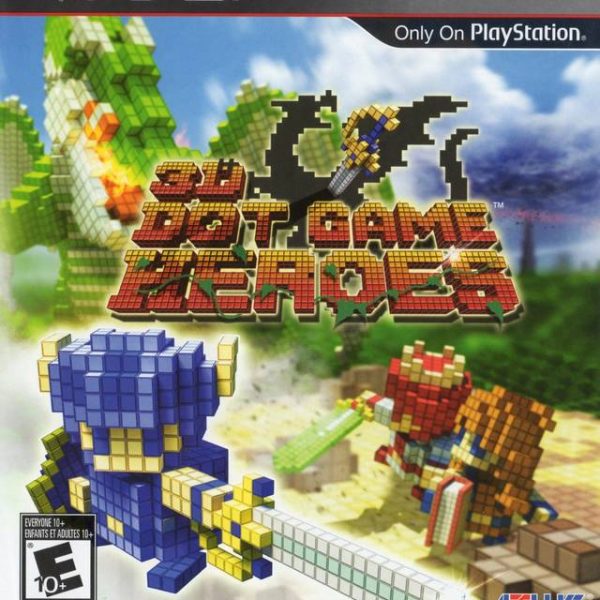 Fans of 2D games tend to get the short end of the stick these days when it comes to new releases. The video game world is always changing and the third dimension seems to be the one that most developers use. So, when a game decides to poke fun at that in a clever way, it can make for some entertaining results. This is what 3D Dot Game Heroes is all about. It takes the idea of 2D gaming and puts it in a 3D setting that fans of old-school titles will appreciate. However, fans of newer games will also find something to enjoy thanks to the Playstation 3’s abilities. Despite all of the fun I had with 3D Dot Game Heroes, gamers need to take a few precautions before setting foot in the kingdom of Dotnia because the glitches and game freezes can dissuade even the most dedicated gamer.

As mentioned, the game takes place in the world of Dotnia. Years ago, the Dark King tried to take it over. His efforts were stopped by a valiant hero and his shining sword. In order to seal away the Dark King permanently, the hero used six orbs from six sages to create the Dark Orb. With the Dark King locked inside the Dark Orb, peace was restored. These days, Dotnia is prospering. King Tezro ushered in a new age for the kingdom by using the power of the orbs to turn Dotnia into a 3D realm. Just as people started to adjust to the third dimension, an evil bishop named Fuelle stole the Dark Orb. In order to restore peace to the land, the king summons you to find the six sages, the six orbs and bring peace back to Dotnia. 3DDGH is a light hearted tale that has a story that seems all too familiar, but with fourth wall breaking and referencing classic games. The script is hilarious, even if the game is only 10 hours long. You will find references from games on the Atari all the way to the Playstation, and the best part of all is that a bunch of the artwork pays homage to those games.

This brings me to the graphics, which are unique in so many ways. The 3D pixilation is a clever idea. While it can look weird at first, you eventually get used to it. Dotnia is a fun world filled with pixels that make anything and everything. When you defeat an enemy or break a jar, you will see pixels explode every which way. While not beautiful in the traditional sense, 3DDGH has a special aesthetic that nearly everyone will appreciate. This is especially true with the towering bosses you have to face. The music is also just as memorable. Many of the tracks sound like they belong in an 8-bit era, but their compositions and instrumentations are made for a modern console. The soundtrack is a perfect blend of old school and new school.

Despite the look and sound, 3DDGH plays like an old-school, overhead adventure title like Alundra or Legend of–Legend of–hmm. Legend of Something. I’m drawing a blank here, but I think you get my drift. At the start of a new game, you can either create a character or use a premade template. You can select gender and class, which will influence the basic statistics. The majority of the game has you moving from the overworld map to a temple, hacking foes to bits, defeating the boss of the temple and reclaiming the orb. Along the way, you’ll unlock new sub-weapons, spells and slowly increase your energy and magic. You will find a boomerang, a bow and arrow, bombs, magic that causes projectiles to reflect and much more. All of these are used to solve the numerous puzzles in the temples. The formula is very basic, but very addicting. Once you earn a new ability or sub-weapon, you can explore new areas on the world map to find secret areas.

3DDGH has some other features that keep the journey fresh. One of the more addicting aspects of it is upgrading your sword. For a price, you can not only increase the strength of your weapon, but you can increase the length and width. Some swords will take up the entire screen if you upgrade them enough. Other swords have special attributes, shoot beams and/or let you perform a spin attack. With over 20 swords to discover, you can easily find a sword that fits your style and personality. Aside from that, there are tons of side-quests available that grant you very handsome rewards. Finally, there are the mini-games. My dear readers, these mini-games are brutal, terrifying and will make you want to fly to Japan and strangle the creators of them. That said, they offer some very useful swords as rewards. There is always something to do in 3DDGH when you feel like waiting to tackle the next temple.

Just be sure to save often no matter what you do. Sure, the difficulty of the game can be unforgiving in certain areas, but the main reason why I emphasize the importance of saving is due to the game having the tendency to freeze. In my experience the game would freeze if you enter a temple, if you leave a temple, if you enter a house, if you leave a house and, worst of all, if you use the Flame Wand. That’s right, using a sub-weapon will cause the game to go kaput. This is the game’s hugest flaw. Another issue are the timed side quests with items you can permanently miss.

3D Dot Game Heroes will last you about ten hours from start to finish. If you want to see and do as much as possible in one file, you are likely looking at twelve to fifteen hours of game time. However, finishing the game once unlocks the challenging FROM Mode. In this mode, the enemies are more ferocious and more abundant. Finally, there is something called Spelunker Mode. In this mode, you take control of Spelunker from the classic game of the same name. You remember Spelunker, right? He’s the guy who would get killed by anything and everything. If you decide to tackle this mode, one hit will give you a game over. Of course, if you want to get all of the trophies and earn the lovely platinum, you will have to finish both Spelunker Mode and From Mode. You will have to do a bunch of other tricky tasks, which include mastering all of the mini games and ensuring that you hit every side-quest. Trophy hunters will definitely have a hard time mastering the game unless they refer to a guide.

Despite the unforgiveable glitches, 3D Dot Game Heroes is a title I can recommend to just about anyone. If you grew up playing video games with small controllers that had two buttons, you will enjoy all of the tongue and cheek video game jokes. If you enjoy fun action and addicting game play, you can sink your teeth into this title easily. If not for some programming issues, this game would have been scored higher. I suggest you save often on your quest to save Dotnia.