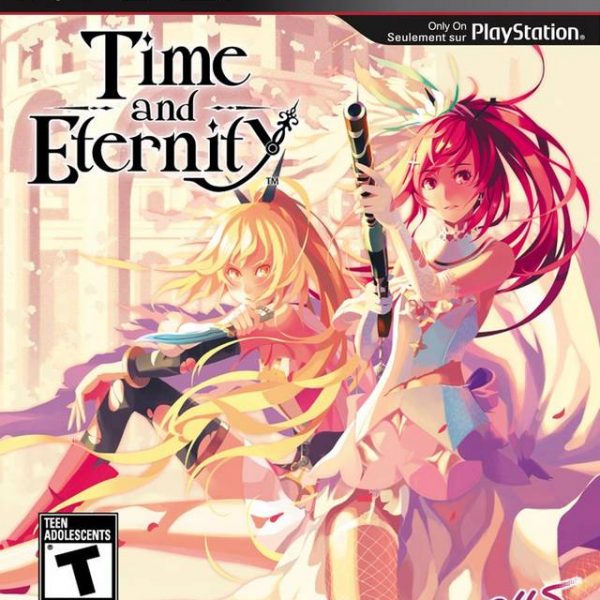 Hey girls hey! Welcome to the first review for 2014. As most of you know, there were plenty of excellent RPGs that came out in 2013. Due to the two most villainous enemies of any gamer, time and money, I was only able to play a handful of them. However, I recently had the chance to catch up and play Time and Eternity for the Playstation 3. Before you start booing, hissing and throwing tomatoes, I have to tell you that Time and Eternity is not as bad as most people say. It needs its fair share of adjustments, but what game doesn’t? Actually, I can think of a few games that are just about perfect so how about we get into it and go over Time and Eternity.

Originally known as Toki-Towa in Japan, Time and Eternity is a tale of love, weddings, tomfoolery and high-pitched anime voices. Your character, a knight named Zack, is about to tie the knot with the Princess of Kamza, Toki. After a delightful afternoon of tea and gossip, the big day arrives. Unfortunately, your wedding gets crashed by assassins. Zack gets mortally wounded, but Toki unleashes her powers of time control and travels six months in the past to prevent the attack. Furthermore, Zack’s spirit gets transferred to Toki’s pet dragon, Drake. Things get even weirder when Zack/Drake/Zrake realizes that Toki shares a body with girl named Towa. If Toki is the Kim Richards of Kamza minus the crazy, Towa would be the Kyle Richards of Kamza, also minus the crazy. In other words, Toki and Towa are different from each other in terms of personality. Thus, Zack-Drake now needs to deal with this dual-personality, assassins, crazy spinsters and his own manly tendencies. As you can see, Time and Eternity is a light-hearted tale that never takes itself seriously. For the most part, I really enjoy it. I think it would have been better if Toki and Towa had more insta-switches like the ones we saw in Valkyrie Profile 2. But, they are great protagonists. Drake-Zack, however, is a clod. He goes back and forth from hornball to sensitive knight at the drop of a hat. Not to mention, none of his lines are very funny. Also, despite Towa being the more aggressive of the two, she has a tendency to act like a complete babe in the woods. It takes away her credibility as the token HBIC. Look up that acronym if you don’t know what that stands for; I can wait. Welcome back! All in all, Time and Eternity’s story is clever and cute, but some of the characters really need a slap in the proverbial face to be more likable.

In order to stop the assassins from ruining their big day, Toki, Towa, and the pet dragon will need to explore landscapes and fight monsters. Like most RPGs, you can participate in side-quests, shop for new items and equipment, and chat with your friends. At your home in Kamza, you are visited by Wedi, Reijo and Enda. Wedi is a wedding planner who is a klutz, Reijo is a rich girl who loves to flaunt her wealth, and Enda needs to stop drinking Red Bull in the morning. Toki’s/Towa’s girlfriends are a cute bunch, so it’s always fun to interact with them when you’re between quests. When you have had enough conversation, you can head to a Grandia-styled world map and head to your next destination. Time and Eternity uses a unique method of exploration. The entire game is hand-drawn, which means you are essentially playing an anime. Toki/Towa can only move forward. So, if you need to backtrack, you have to do a 360 and continue to move forward. It has a tendency to slow down exploration, but if someone as impatient as me can deal with it then anyone can. As you travel back and forth, you will see a meter rise in the top-left corner of the screen. Once full, you will likely get into a battle with a few more steps.

Battles in Time and Eternity are also hand-drawn. Toki and Towa have different skills, but for the most part they play the same way. These one-on-one fights are reminiscent of the sleeper hit Thousand Arms from many years ago. Actually, T&E has a lot in common with Thousand Arms, but that’s another story for another section. At long range, you can mash the circle button to use your rifle. At close range, you can use your knife. Both girls can dodge, guard, parry, move back and forth and use their abilities. Meanwhile, Drake/Zack/Zrake/Dack/Whatever will provide support with healing, spells and attacking. Toki is more proficient with rifles, Towa is more proficient with knives, but both are brokenly proficient with magic. Toki and Towa have access to a variety of skills, but the only thing you need for most battles is a spell or two to obtain victory. Thus battles usually go like this: mash the circle button -> dodge as you need to -> cast magic -> … -> profit. As long as you spam your attacks long enough to use magic, the battle ends up being a snap. You can also equip passive skills on your girls, some of which let you start off with enough SP to unleash a spell from the start. Finally, the girls will eventually learn time magic which lets them wreak even more devastation. Needless to say, this is an easy game that can be finished with little to no level-grinding.

Battles might be easy, but there are a variety of issues with them. One minor issue is that leveling up causes Toki or Towa to switch places. Certain items can be used to do this, too. It was more of a bother than anything else. A more questionable and annoying issues involves learning abilities. As you continue the game, you will receive Gift Points. These are spent on Gifts that teach you spells and skills. Even if you are at the right level for certain abilities, you won’t have access to it until you switch. In other words, if Toki unlocks a set of skills with her GP and has the proper level to use these skills, you will have to switch to Towa -AND THEN- back to Toki. It’s ridiculous, especially since it doesn’t make any sense. Finally, a minor gripe is that Toki and Towa have the same victory pose. Toki giving the peace sign after twirling her rifle is fitting, but Towa should do something different.

In fact, other than the hair and eyes, Toki and Towa do everything else about the same. Luckily, they look adorable. Time and Eternity’s hand-drawn graphics are nice, but the same animations get used a bit too much. For claiming to be a new type of high-definition, hand-drawn RPG, I expect much more animation and much less recycling. Once again, this style is similar to that in Thousand Arms. Fields look a bit bland. They look like they belong in a semi-modern Playstation 2 game. P.S. have you noticed I keep calling the exploration areas fields and not dungeons? All of the places Toki and Towa explore take place in the great outdoors. It’s an interesting idea, but the lack of variety means that each place looks like the others. Actually, there are only four types of places you will explore: islands, forests, fields and floating sanctuaries. Also, the monster designs are lacking, too. On the other hand, they have great animation. Ok, I think I’m going back and forth more than a lost mother driver on her way to soccer practice. Let me try to sum it up: the graphics in Time and Eternity take a unique approach that works well in some areas but falls flat in others. Unfortunately, there is no happy medium of the two. Luckily, the music is wonderful and stays this way for the entire game. It’s catchy, zippy and fitting for an adventure such as this. Most of T&E is voiced, so you will be excited to hear familiar voice actors and actresses as they characterize some of the silliest characters in the RPG genre.

Silly is probably the best way to describe Time and Eternity. Aside from the music, each aspect of the game has issues that need improving. The story is the right length and fun for the most part, but Zack is obnoxious and Towa should have been written to be more of a bad-ass. The choice to make the game entirely hand drawn is admirable, but most of the animations get used way too many times. The battles had the potential to involve more than just spamming an attack until you are able to use an overpowered magic spell. Still, silliness aside, Time and Eternity provided me with a fun RPG. Think of it this way: I enjoyed it way more than I enjoyed Ni No Kuni, which ended up being favored by far too many people last year. Unfortunately, just like NNK, I have a hard time recommending Time and Eternity unless you are a die-hard RPG fan in the mood for something different. As for me, I found it to be a great way to kick off 2014. Thanks for reading, and remember that even though planning a wedding is stressful, it will never be as stressful as the one that happens in Time and Eternity!