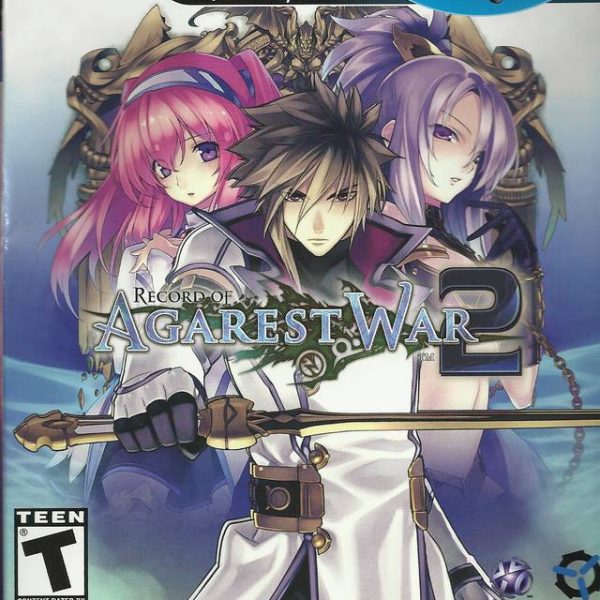 Welcome, god killers, to the wild and crazy world of Agarest. We are back in this strange land with an all new adventure that has a huge amount of content and a battle system from the creative folks of Idea Factory and Compile Heart. For those who have played both Agarest War and Agarest War Zero, you will be in for a pleasant surprise. Instead of using the arduous formula of a strategy game, Agarest War 2 plays like a traditional RPG with a completely revamped battle system that is both tricky and rewarding. This, plus a new look and an all new cast of characters come together to make the best edition in the series yet.

Even the introduction to Agarest 2 starts differently than the previous titles. Our hero is Weiss, a stoic young man who commits the act of deicide and causes what is later known as the Day of Light. Upon slaying a god, Weiss caused a huge flash of light to appear in Agarest and, as a result, demons began to overrun the populace. The bad thing about this is that Weiss has no memory of doing such a thing and cannot remember what he was doing in the realm of the gods in the first place. A messenger of the gods, Eva, tells him that he must give his soul to the gods and find Maidens of the Pillar to repent. Failing to do so will result in the destruction of the world.

Unfortunately, Weiss’ crimes get passed onto his children as well. As expected, he’ll have to select various bachelorettes and give birth to a new hero that continues on with the slaying of the demons. While the story starts of basic, those following a guide to the true ending will see that this is a much darker and serious Agarest. It is also the best written, partially thanks to Akyss Game’s fantastic localization. The characters in this game have been developed from the inside and out to create a very memorable cast consisting of beautiful women, stern warriors and mysterious heroes. As expected, the requirements to reach the true ending will cause you to go to a guide. Since Agarest 2 is a 60 hour game, it would be a shame to miss out on the excellent true end due to missing certain events.

Seeing as this is an Agarest title, you are probably wondering if there is some inappropriate content shown throughout the game. Like the previous titles, it takes a back seat to the main story. Sure, there are hot spring scenes and (as an example) a shot of two of the girls chowing down on a banana, but things like this are few and far between. The same can be said about the classic wedding events that have been around since the advent of Agarest. Upon completing a generation, you will witness your bride in a stunning wedding gown followed by her in a rather suggestive position. It has worked before for the series, but once again, there isn’t anything that would distract you from fighting demons and saving the world.

While the method of progression in Agarest 2 has some similarities, actually taking control of your heroes has changed for the better. Say good-bye to chains of orange and blue spheres that link you from one story event to the next. Instead, you have a rotatable world map that you can explore from hemisphere to hemisphere. Dungeons are similar to those found in Agarest Zero in that they consist of sections that house a battle. Also, there is only one town in the entire world of Agarest 2. This is where some of the fun begins. For starters you can buy, sell, craft, reinforce and enhance items equipment. Another thing you can do is turn in guild requests at the Hunter’s Guild. For those of you who have played previous Agarest titles, the mere mentioning of these is likely to send you to a corner in the fetal position. Worry not, for they are much less demanding as before. In fact, trophy hunters will be happy to learn that the platinum trophy is much more forgiving than it was in the first two games. One of the more important things that you will have to do is use Technical Points to learn new skills. In the menu screen, you will be readying your party with equipment and assigning the learned skills to various slots. To describe the level of depth and the amount of options available that comes with this would be way too time consuming. Just recognize that you will spending a fair amount of time in the menu. This is because battles are plentiful and having the right skill set-ups is crucial for your survival.

Combat, upon first glance, is all over the place. You have to take more things into account than a CPA. Thus, trying to describe it to you in a few sentences would be difficult. If you played Cross Edge, then you are at an advantage in understanding it. The same can be said for those who played Valkyrie Profile, to a lesser extent. Agarest 2’s battle system relies on timing, switching between party members and managing resources. Enemies do not mess around even if you are playing on Easy Mode. Here are a few of the terms that you will need to understand to fully grasp the battle system: Formation, Skill Points, Positioning, Ultimate Points, Combination Skills, Action Points, Wait Time, Attribute Levels, etc. And the list goes on. While Akyss was kind enough to provide you with tutorials, you only are able to view them once. At first, I felt overwhelmed by the sheer magnitude of stuff thrown at me. However, much like Cross Edge, at one point everything clicked and the battle system ended up becoming one of my favorites in an RPG. Again, if you played Cross Edge, then you will be able to grasp most of the mechanics easily. If not, it will take you some time. No matter what, you should stick with it because when things “click” you will be performing some impressive attacks and combos.

The graphics in Agarest 2 are more impressive and immersive than the previous games. While the animated portraits seen since the Trinity Universe days are still used, the sprites are much bigger and expressive. As you move the hero across a giant world map, you’ll see that Agarest 2 is a huge land. There are a ton of dungeons to explore and while you won’t be spelunking in the traditional RPG sense, you’ll be seeing a wider array of settings than before. The biggest problem lies with the enemy designs. Some new foes make an appearance, but the bees, bats and giant dogs are back again and quite frankly I’m tired of seeing their faces. One good aspect that does remain the same is that the entire script is voiced in Japanese and accompanied by a fantastic sound track. Not much more to say there, and those who have grown familiar to those unique sound effects only found in Idea Factory titles, well, you’ll be hearing more of them.

To conclude this review, I need to give a shout-out to the awesome GameFAQs.com user CreekCo for all of his patience in answering my needy questions. I’ll admit that I wasn’t impressed with the new look and feel of Record of Agarest 2 at first. Thanks to his advice and to some persevering, I ended up unlocking the true ending and the platinum trophy. The best part is that I enjoyed every moment of the experience. In fact, all of the things that make this edition of Agarest so unique from the others is what makes it the best game in the series. Fans of complex RPGs and fans of the series will likely enjoy Record of Agarest 2 immensely and, just maybe, rank it as the top game in the entire series.