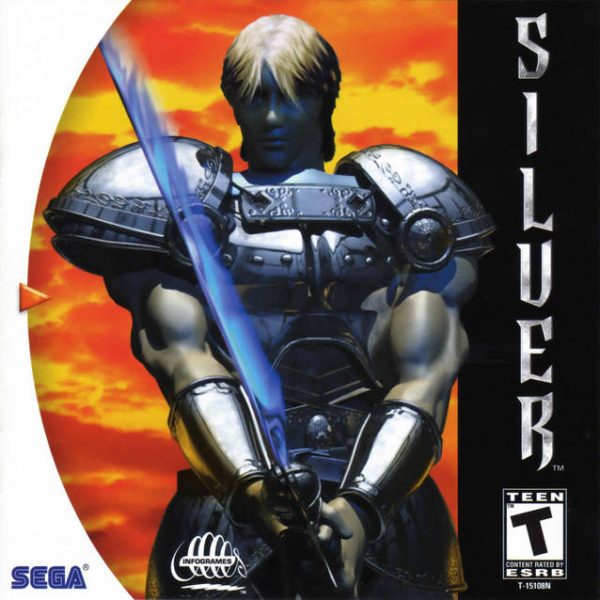 Author’s Note: This review was originally published on February 10th, 2011. It was the first Dreamcast game that I ever reviewed.

As an equal opportunity gamer, I like to give the underdogs a shot. This isn’t strictly limited to video games. Consoles get special treatment, too. Most of you know that the Sega Dreamcast had a short life due to various reasons. Disputes will go on for gaming eternity, but one thing that spelled doom for the Dreamcast could have been the lack of RPG titles. Silver, a Spiral House developed game, might have answered the call for fans of RPGs initially. However, after the initial sequences, Silver ends up being another nail in the Dreamcast’s coffin.

The Bachelor.
Silver is the story of an evil sorcerer named…wait for it…Silver and his iron fist. As this diabolical ruler continues his dictatorship over the country of Jarrah, ladies get taken away by his minions so that Silver may find a new bride. The hero of this story, David, falls victim to this as his honey-poo Jennifer gets taken away before his eyes. Fed up with Silver, David embarks on a quest to reclaim Jennifer and will soon discover Silver’s true intentions.

It’s been a while since I have personally seen a title that involves saving a maiden. The last time I played one it was during my time with Tales of Rebirth. Silver’s story works and it can get interesting as you meet some of the characters in the quest. David doesn’t work well as a lead character, but his supporting cast picks up his slack. I do enjoy a good story of saving a loved one and Silver has that going for it. I just don’t like that David doesn’t work well as the main character.

The Silver Surfer.
David’s character doesn’t work for multiple reasons, but the biggest hast to be due to his voice acting. He’s monotone, bored and has no personality. This is the main character we’re talking about and it’s unacceptable. Voice acting is either hit or miss in RPGs because character development can be enhanced with excellent voice acting. When you look at this shining knight with blond hair, a perfect build and pure intentions you would think the developers would find someone more suitable than a Ben Stein (or the Silver Surfer from that Fantastic Four movie…) replica. Aside from that, the rest of the voice acting and the music are passable.

The graphics take a step back from the capabilities of the Dreamcast. While the pre-rendered backgrounds look nice, the blocky representations of characters need work. Lots of work. Other RPG titles like Skies of Arcadia and Grandia II display gorgeous 3D polygonal models with color, detail and vibrancy. Come on, Silver! Step up to the plate! What’s worse is that your characters will look like specs because certain areas have been zoomed out so much that it feels like you’re looking at the scenery from an airplane.

Easy as Pie.
Combat in Silver is standard action/RPG affair. David is controlled by the player while the unreliable AI takes over the other two characters in the party. David has an arsenal of sword skills that execute with various commands like a jab, a thrust, a circular swipe and lunge. Most of the time, David is fine with using the standard slash, making Silver a typical button mashing action/RPG. Luckily, you can change characters on the fly if playing as David gets too boring. Other characters have a bit more variety, especially a slingshot wielding debutante. Alongside the attacks, magic and items can be used by accessing the pie menu. This clever looking menu is easy to use and I’m wondering why more RPGs don’t use something like it. Another feature that Silver has that others RPG should is the warp ability. After you visit a place on the world map, you can instantly warp back to it.

Tarnished Silver.
Silver is one of the few RPGs available on the Dreamcast. Unfortunately, it’s not a very good one. It can be finished in about 15 hours and there is little challenge offered. For everything Silver seems to do right, it does two things wrong right after it. The pie menu is innovative, but it gets used in dull combat situations alongside your doofus AI.The story is interesting, but the main character lacks the charisma and a decent voice actor. The scenery can often be a sight to behold, but the characters and special effects are sights for eye straining. In the end, the Dreamcast has other RPG options out there. Some are worse than Silver, but a few are much better. I recommend playing Silver only after you’ve completed some of the system’s more heavy hitting role-playing titles.