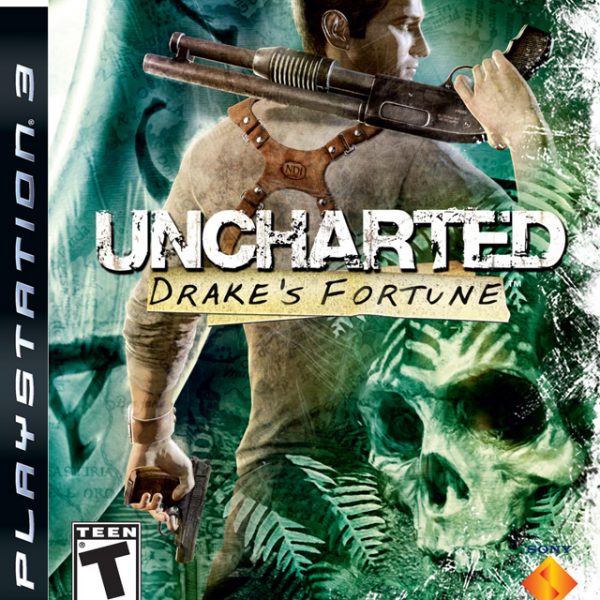 After I completed Uncharted: Drake’s Fortune, I had two questions for my fellow gamer-friends. The first was if the series got better after each entry. Indeed, Drake’s Fortune did not age well. Even if I were to step back to 2007, it still wouldn’t even be a competent game. The second question was about the series as a whole: what’s the appeal? If other games are like this, then it’ll be difficult to get me motivated to try them. Truthfully, I needed a break from my usual genre and went with something that seemed like a fun idea. Uncharted: Drake’s Fortune is a mess.

Uncharted: Drake’s Fortune stars a modern day treasure hunter named Nathan Drake. Supposedly related to Sir Francis Drake, Nathan is on the trail of a treasure that his ancestor has left behind. Along with his buddy Victor “Sully” Sullivan and a reporter named Elena Fischer, Nathan starts to follow the clues left by his ancestor. As these things go, pirates and greedy bounty hunters are on his tail. It’s an interesting idea. However, for a game that has a theme of exploration and treasure hunting, it’s an odd choice to see that the game takes place on one, small island for its entirety.

But, I don’t mind that a game takes place in one area. In fact, at times, I prefer it for games to do this. It helps build a better focus on history, lore and legend. For a game about discovery and ancient treasures, it seems like a good fit. My problem is Nathan himself. He has a tendency to make light of every situation he’s in. Hanging over a cliff? He’ll crack a joke. Discover an enemy corpse from a trap? He’ll crack a joke. Driving on a jet ski while under enemy fire? He’ll crack a joke. There’s nothing believable about him. The supporting cast get less development and screen time, but they’re more entertaining and easier to stomach than Nathan. The villains are easily forgettable.

Since you’ll be controlling Nathan most of the time, you’ll need to get used to him and his “witty” quips. The first two chapters will give you a general idea of what you need to do to make it through the game. The first chapter will introduce you to combat. Nathan will have access to a variety of firearms. You can aim with L1 and fire your gun with R1. You’re given a target to help with the aiming, which is useful when you’re against one or two enemies. However, most of the time, you’ll be under fire from small platoons. Enemies have pinpoint accuracy, so Nathan will get hit often. This causes the screen to turn black and white. Eventually, it’ll revert to normal. The annoying process usually goes like this: get swarmed by enemies, find some sort of cover, try to get a head shot, get hit by enemy fire, go back under cover, wait ten to fifteen seconds to recover, and try again for that head shot. Nathan is also capable of performing melee attacks or stealth kills, but most of the time you’ll be dealing with the clunky gun play and hoping that you can recognize enemy patterns to survive. As an aside, I can’t help but to wonder: how in the world is the main antagonist able to hire all of these goons? By the end of the game, Nathan will have killed enough people to fill a small village.

The second chapter will introduce you to the platforming. At times, this can be fun. Other times, it can be redundant. Nathan is able to (without getting winded, mind you) jump long distances, shimmy along ledges and cliffs, wall jump, and other tasks that would put anyone who thinks that the Tough Mudder was difficult to shame. I don’t question how it’s possible Nathan doesn’t break a sweat during these moments, but that’s another story. Some areas require yo to swim. Thankfully, these are few and far between. At times, you’ll be high above the raging ocean, a bottomless pits, and/or other hazards. Your path is easily laid out, so there is no fear of getting lost. It takes away from the exploration aspect of the game having that vine or that ledge be perfectly in reach, but it doesn’t stop things from being enjoyable. It’s just unfortunate that most of the time you’ll be in prolonged gun battles with enemies.

One chapter flips the scripts and provides some fun. You’re on the back of a jeep equipped with unlimited ammo and grenades, and you need to blow up your pursuers. Unfortunately, the stage is over too quickly. Another stage that offers something different puts you on a jet ski. While you have unlimited rounds in your grenade launcher, the stage is nothing more than slowly going through the water, blowing up any enemies or gas drums, and resuming. The game lets you believe that you get to race on a jet ski, but it’s a constant slog of starting and stopping. Finally, there are a few puzzles in the game that need to be solved. Due to Nathan having constant access to the answers via his notebook, these puzzles do nothing but add extra padding. They’re easier than easy. Overall, the game play in Drake’s Fortune is a downer. It’s one of those cases where there was potential, talent, and goods but none of them were used to their fullest effect. In fact, they barely reached a “half” effect.

One thing that I have no complaints about is the presentation. I may not like Nathan Drake as a character, but his voice actor and those that voiced the rest of the cast did a fantastic job. The music took a back seat to most of the game play sequences, but during the various movies the game is supported by a great sound track. Graphically, Drake’s Fortune is very, very pleasing. While the areas start to look samey near the end of the campaign, they’re never unpleasant to look at. If not for mobs of enemies trying to fill Nathan with bullets, the majority of the game looks like it would be ideal for a vacation.

So, you might be wondering why I decided to play Uncharted: Drake’s Fortune after all of these years. The quick answer is that I wanted to finish the trophy list. And, I did. While going through the game once will take about five to six hours, those that wish to get all of the trophies will need to put in nearly 20 hours. The play time has to do with constantly getting massacred by the swarms upon swarms of enemies in higher difficulties, namely Crushing Mode. In this mode, ammo is more scarce, enemies are more resilient, and the game becomes even more frustrating than it was in other modes. I’m a glutton for punishment, I guess. By this point, it’s probably clear that I don’t recommend Uncharted: Drake’s Fortune. It’s a poorly designed game with an obnoxious leading character that tells a bland story and features aggravating play mechanics.

Overall, 4/10: Drake’s Fortune will turn into your misfortune if you decide to give this game a chance.