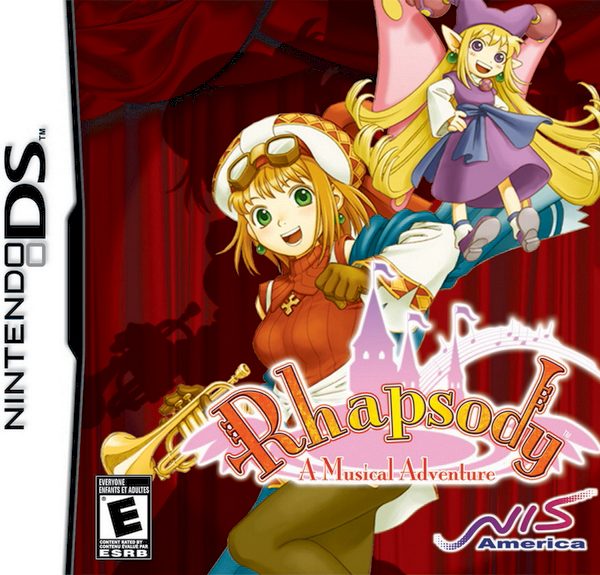 Author’s Note: This review was originally published on December 23rd, 2008. “Witty” taglines aside, this review could have been better because I should have emphasized the fact that my copy of the game was broken. A game-breaking bug prevented me from progressing.

My first experience with Rhapsody came around my birthday. I had a choice between it and Legend of Mana. I went with Legend of Mana, yet I always wondered what could have been with Rhapsody. With the announcement of a DS remake, I was excited to get to play an improved version of a poorly reviewed RPG that is based around music. My excitement was short-lived, and for multiple reasons. Despite the darling graphics and the theme of music, Rhapsody on the Nintendo DS is an RPG best overlooked.

Musical Mayhem.
Our story begins in a magical kingdom where our lovely heroine, Cornet, wishes to become the bride of her prince charming. At first glance, Cornet seems like your average girl. Upon second glance, you learn that this talented musician has the ability to bring puppets to life with the sound of her horn. Cornet and her best puppet friend Kururu embark on adventures to find her true love.

A simple story, indeed. There is one interesting aspect about this game, and it is that the characters have a tendency to break out in song and dance when progressing the story. I was never a fan of musicals, but I did find these little breaks from the otherwise shallow story and characters to be endearing. Cornet is adorable, but there is little to her. Without the musical aspect, Rhapsody is just another fairy-tale clearly meant for a younger audience.

Almost Too Easy.
Another fact about the game that shows it was meant for a younger crowd comes with the difficult. As evidenced by the tag-line, this game is super easy. Outside of battle, you can shop for accessories and items. However, I found little use for them. As you explore a town or dungeon, your location is shown on a well-drawn map. In the dungeons, battles occur randomly. This is where the game becomes a cake-walk, literally and figuratively.

Battles are turn-based with both sides fighting it out until one is no longer standing. Your team can attack, use skills, use items, or flee. Pressing the confirm button can get tedious, so it was a good thing the creators included an auto-battle option in the game. The reason battles are tedious is because of the lack of difficulty. Your attacks are powerful, your skills are even more powerful, and Cornet has amazing healing abilities. Furthermore, as she uses her trumpet skills, she builds up a bar. With enough points on this bar, she can unleash devastating magic in the forms of flan, pancakes, and, of course, cake. Amusing, yes, but they make the game even easier.

Painting a Picture. Singing a Song.
One thing about Rhapsody that I enjoyed was the presentation. First, the graphics. The watercolor world you experience is lush and colorful. The character sprites are equally beautiful. Some are a bit awkward, but they are still passable. In the end, the graphics add to the fairy-tale, musical atmosphere.

With such an atmosphere, it is expected that the game should have a good music selection. Indeed, it does. The battle theme is a bit dry, but the songs that Cornet and company sing were done well. Yes, they were in Japanese, but they were still done well. Outside of sung songs, the rest of the tunes you hear are enjoyable.

Not Enough.
The game is super short and super. The graphics and music were not enough to save the lack of challenge and the lack of a decent story. Sure, this game might be a bit more geared towards a younger crowd or RPG novices. However, had that been the case, I would have not checked it out in the first place. I blame the “Rated E for Everyone” on the cover of the box. Rhapsody: A Musical Adventure was a boring game that can be overlooked, especially with the plethora of RPGs out now for the DS.