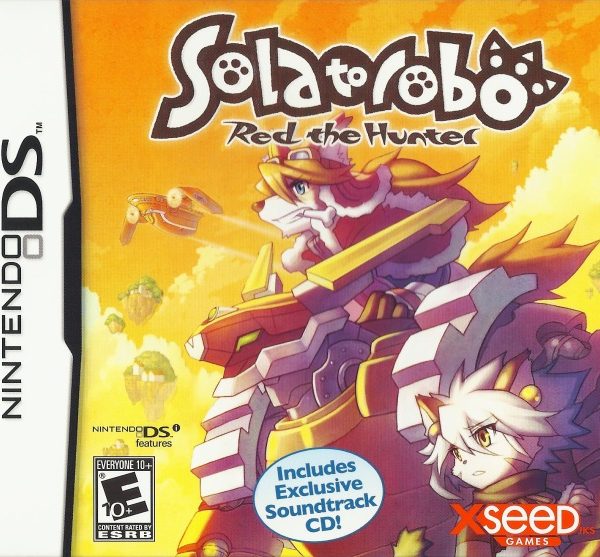 Greetings, readers! Welcome to another review by me. Today, we’ll be looking at a game in the Little Tail Bronx saga. What’s that? You never heard of such of a saga? Of course you haven’t! Heck, you probably never heard of the first game in the saga that made it to our shores: Tail Concerto. The only possible way you may have heard of it is if you took your copy of Thousand Arms (which I’m sure you have…EVERYONE played Thousand Arms, am I right?) and gazed upon the back of the instruction manual. There, see that? That’s an ad for Tail Concerto. To my surprise, that game made it to America as did another game in the series: Solatorobo: Red the Hunter. That’s a mouthful, and a handful, so I’ll just call the game Red the Hunter from this point forward. Cool with you? Alright.

Onward, then. Despite the silly sounding series and the sillier sounding games, I have to say that Red the Hunter was the most delightful surprise for me this year. I played many games in 2012, some good and some not so good. Red the Hunter was a good one, despite some of the events that transpired in the story. I know that a bunch of you will turn away from it due to it featuring anthropomorphic dogs and cats, but if you can get past that you will be in for a solid adventure with lots of content and fun.

The game takes place in the world of Shepherd. Earth has been long gone, and now dogs and cats go about their lives on floating continents. Red Savarin is living the life of a hunter, working odd jobs here and there and making a profit alongside his sister Chocolat. As they fly from location to location on their ship, Asmodeus, Red uses his robot, Dahak to get his jobs done. A chance encounter during one job with a young boy named Elh causes Red to discover a medallion with supernatural powers. Red’s life is about to be changed forever as he ventures all across Shepherd and deals with sky pirates, poachers, the Kurvaz organization and his own bizarre past. It’s a classic combination of story arcs, and XSeed did a great job with the translation. For the most part, the story is funny and light-hearted. Red and Chocolat remain an upbeat duo and inspire those around them. When the second half of the story begins, things become a bit weird. At this point, you begin to learn more about Red’s history, the cause of Shepherd’s existence and a few of the characters begin to act too seriously. When these characters are dogs and cats, it can be a bit difficult to not roll your eyes at their heroic speeches or philosophical insights.

Seeing as the world consists of furry creatures that walk on two legs, you might be wondering how the game looks. You – ARE- wondering that, aren’t you? Well, let me inform you on Red’s graphics. This is a great looking game rich in color and style. All of the locals in the various towns look like cartoon characters. During certain events, some of the more prominent story characters will be fully shown in 3D movies that look wonderful. Each town is unique, such as one consisting entirely of scrap metal and another that is made only of coral, anemones and other exotic marine life. Needless to say, Shepherd is a very unique place. The only downside is that the enemies Red faces come in little variety. The bosses are fine, but the lackeys all look the same, making them less fun to toss around.

No, really. You toss around your enemies to damage them. Red the Hunter plays like an action game in that you can run, dash and jump around various towns and dungeons. After accepting a quest from the guild, Red will be ready for a new quest. To damage your enemies, you’ll need to use Dahak’s massive arms to throw back their projectiles or lift them up and slam them down. You can perform combos by continuing to jump and throw. Most enemies will need to be lifted from the back. Boss battles are really fun because you have to dash, dodge and still find openings to damage them. Bosses are rarely challenging, but they are still fun. Inside his robot, Red is top dog. Red can hop out of his robot to stun enemies, and he needs to be out of it to activate switches and levers. As enemies fall and as you finish your quests, you’ll be granted money and experience points. The only benefit to a level up is an increase in health. To increase the rest of your stats, you need to use P. Crystals, which are found throughout the game. Dahak’s main frame is a giant grid. Each square can only be unlocked with the right amount of P. Crystals. Then, you can use items that are in the shape of blocks to increase Dahak’s attack, defense, mobility and hydraulics. The customization is surprisingly complex for such an otherwise simple game, because you have such limited grid space.

As the game progresses, you can unlock new forms for Dahak, as well as participate in various mini-games. Some, like fishing and crate smashing, are a rewarding and fun distraction. The racing game is awful, so don’t bother doing that unless it’s required for a quest. The game will last you about 25 hours if you do all of the quests. If you buy the game new, you will get a sound track alongside the game. The music in Red the Hunter is great, especially the ending theme. If you have the option of buying it new, I recommend it so you can listen to this great music outside of the game. Oh, and one more thing mentioning is that the game isn’t fully voiced, but the characters do have little sayings and expressions that are voiced. While the game is voiced by Japanese actors and actresses, everything they say is in French. So, you’ll be hearing a Japanese actor or actress voicing a dog or a cat with a quick statement or expression said in French. Whatever, the game is already pretty weird as it is so why not add this to the list. Red the Hunter doesn’t offer the much in terms of replay value, but the quest to the end is still fun. Like I said, it was the biggest surprise of the year for me. I recommend it to anyone who is looking for an easy-going adventure game with some memorable characters, a neat setting and some exciting action. The story can get a too loquacious near the end, and the lack of unique enemy designs makes it so new areas can only be admired for the scenery. Still, these are easy to overlook. I realize that Red the Hunter features cats and dogs for the main characters, but looking back on it, this is actually quite fitting. A pet is the perfect travel companion for short or long trips. Thus, it makes sense that a game like this is also a perfect travel companion.