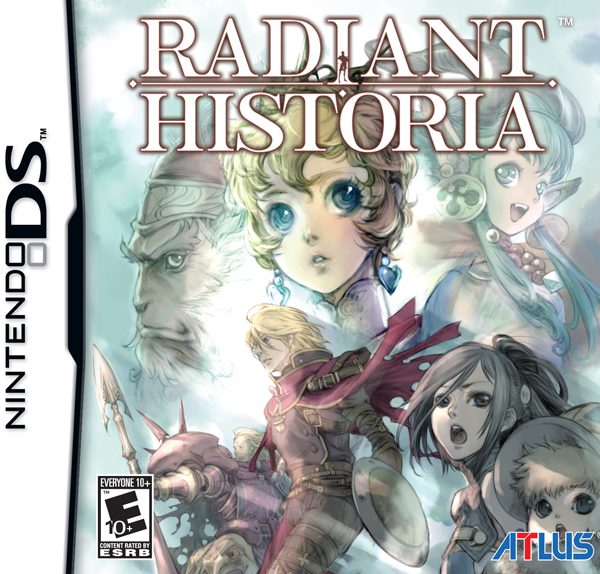 Radiant Historia is a story-driven RPG from the people of Atlus and some people that helped with the development of Radiata Stories. I’d love to begin this review by discussing the spectacular soundtrack from Yoko Shimomura. Or the battles that combine the best of games like Final Fantasy Tactics, Xenosaga and Breath of Fire III. Or the sleek sprites and fabulous character art. Or the story. Unfortunately, I have to start by saying that Radiant Historia gives off a first impression that could turn people away from enjoying a unique, challenging adventure. In a nutshell, the first impression takes too long to build the overall plot’s momentum. We get it, you’re trying to set the stage for a time traveling adventure and avoid as many paradoxical plot holes as possible, but can I PLEASE fight a boss already? Can I PLEASE begin exploration? Can the characters PLEASE shut the hell up for once instead of spewing off conversation sans gravitas?

Fine, I’m exaggerating a tad. However, if you stick with Radiant Historia you’ll understand what I mean. Actually, the story’s initial scenes set a fantastic stage. It stars Stocke in the kingdom of Alistel. The stoic hero is given a mission to gather intelligence from a spy who infiltrated the Grangorg Kingdom. Stocke’s superior, Heiss, gives him a book called The White Chronicle and the assistance of two mercenaries, Raynie the sassy spear lady and Marco the dwarfish healer. The mission goes horribly awry, but a wounded Stocke ends up in the world of time called Historia. He gets guided by mysterious twins Theo and Lippti to use The White Chronicle to alter the past and shape the future. Stocke is able to turn the mission around and return victoriously, but he’s got plenty of issues to deal with. The world is turning to sand, allies are starting to act dubious and Stocke has plenty of unanswered questions. It’s a great tale…once you get past the first chapters. The first conversations between Stocke and company are long-winded, serving as tutorials for people that neglect to read the instruction manual. Trudging through the pandering eventually yields the exciting adventure that is promised. Around chapter three, things pick up pace and the end result is a story that combines time travel, revenge and conspiracy. Furthermore, that’s the chapter in which more interesting characters join you. One of these is Eruca, a gunslinging princess. She’s fabulous and worth the wait. The rest of the characters that are already in your current party start to become more developed.

While Radiant Historia is divided into chapters, it gets further divided into two time lines: Standard History and Alternate History. Thanks to Stocke’s book, he can move to certain nodes of history and alter decisions from one event to make another event more preferable. If the wrong decision is made, the world ends and he gets a chance to try again. No, I’m serious. The world will erupt into a catastrophe and Stocke warps back to Historia to right his wrongs and set history on the proper course. The unique time traveling formula is very reminiscent of Chrono Trigger, but takes it a step further. Stocke can also find hidden treasures, detonate bombs to clear new paths, slash obstacles with his sword and turn invisible to avoid enemy detection. It is all basic, but it’s also rewarding and functional. There is a fair amount of backtracking involved during various nodes in the histories. Usually, careful thinking can save you from repeating the same mistakes. One of the more rewarding but tedious tasks involves Stocke talking to NPCs to begin side-quests. Some of these can span the entire course of the game and require even more backtracking. Luckily, the rewards to be reaped make the effort worth it.

Presentation in Radiant Historia is what I like to call divine nostalgia. You should probably do yourself a kindness and pick up a nice pair of headphones so you can fully enjoy the spot-on sound effects and some of Shimomura’s best work. Fans of hers immediately recognize her wonderful style. The expressive character sprites that inhabit the game interact with gorgeous, pastel environments. A beautiful character portrait accompanies the main characters when they speak, but they don’t provide any expression. One downside to the graphics is the fact that the monster designs have little variety. Luckily, you can take them out with flashy spells and skills in Radiant Historia’s fast-paced battle system that requires careful thinking.

Beginning a battle involves Stocke running into a foe. However, Stocke’s team can gain the upper hand by whacking the foe a few times with his sword, causing it to pass out. The battlefield is a three by three grid in which enemies can take up one, two or even three spots on it. Certain bosses can take up the entire battlefield due to their monstrous size. While you can just attack enemies one at a time, you’ll get nowhere and end up wasting time. The key to victory is using skills and spells to move enemies together in one square and strike them to deal massive damage to them. With the right set of moves, enemies will get tossed around like rag dolls and end up getting pummeled to submission all at once. Single attacks deal less damage than they would when used in a combination, thus it’s to your advantage to take control of the battlefield. Furthermore, you get better rewards with a higher combo count. This pertains to even the earliest of fights. The battle system will test your logic regarding the best strategies to defeat your foes. Later, some enemies will be protected by obstacles or be planted within the ground.

It’s important to note that you can alter the turn order of your companions. This allows you to set up the best combo possible. For instance, you can set a trap up with Aht, push two foes together into the trap with Stocke and finish with a strong attack from Rosche. The possibilities are endless. As characters continue to attack, they will build up a meter that can be used for one of two things. Sure, you can use it to deal more damage than usual with a special attack. Or, you can delete an enemy turn and potentially increase your combo count. Radiant Historia’s battle system is a bit advanced, but with practice, you can turn the tides of battle in your favor. Level grinding is rarely necessary because the important thing to do is make sure you have the best equipment and that you know which skills to use to attack multiple enemies at once.

Radiant Historia will last around 30 hours if you decide to do the basics. Finishing the multiple side quests will take the time up to at least 40 hours. The game lacks a new game plus feature, but if you want to play the game a second time it’s easy to do so. All you need to do is head back to the beginning history node. It’s important to recognize that this will mean dealing with the introductory sequences. Radiant Historia’s only true downfall is the fact that it takes a while to pick up pace. Stick with it. Once you get past the initial mumbo-jumbo, you’ll get to experience a unique RPG that takes you back and for through time.