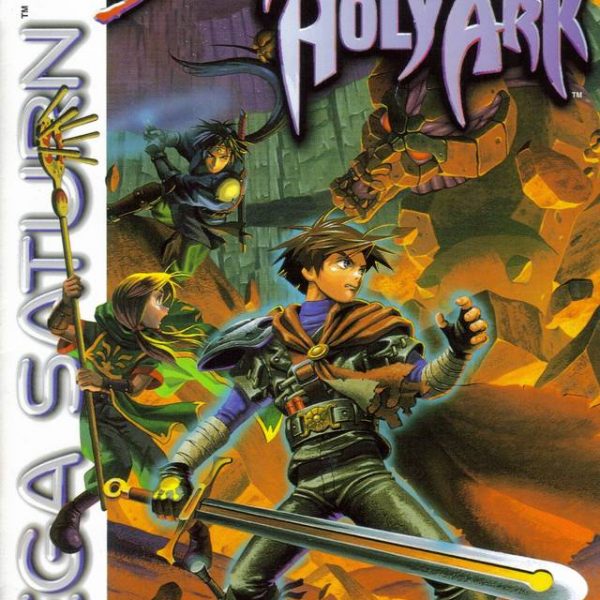 Shining the Holy Ark reminds me of a time when video game developers actually cared about their finished products. From the opening movie to the ending credits, Shining the Holy Ark had a quality that is vividly lacking in modern gaming. The game was released on the Sega Saturn in 1997. Many games and consoles have come and gone since that year. Yet, Shining the Holy Ark (pardon the word choice) continues to shine brightly while surrounded by a deluge of realistic browns, DLC, and open worlds. It’s worth the time to dig out your Saturn and check out this wonderful and challenging RPG.

The opening cinematic in Shining the Holy Ark shows three evilly dressed individuals using their dark sorcery to shoot down an airship. I kid you not. From there, the game begins properly. You take control of a mercenary named Arthur. Arthur doesn’t say much. In fact, he’s a silent protagonist that has very little backstory. Arthur has teamed up with two wizards, Melody and Forte. The three of them have been tasked to find a renegade ninja named Rodi. As they search for his whereabouts in an abandoned mine, a cave-in causes Forte to become separated from Arthur and Melody. Arthur, Melody and Rodi end up sustaining terrible injuries, but they are healed by alien-like beings that call themselves Spirits. Escaping this mine is their top priority, but there are questions-a-plenty in the back of their heads. Where is Forte? What caused the mine to collapse? Who are these Spirits? What was Rodi doing there in the first place? Despite its start, Shining the Holy Ark is light on story and character development. Similar to Arthur, you won’t learn much about his fellow party-members, nor much about the villains. Instead, the world building and lore are seen through the townsfolk. This is a grim and depressing world. There is some shady business going on behind the scenes and all of the citizens that call the world home are suffering for it. It’s a unique way of story telling that helps paint a bigger picture.

Most of your time in Shining the Holy Ark will be spent in dungeons. In fact, Shining the Holy Ark can be considered a dungeon-crawling RPG similar to something like Dungeon Travelers 2 or Demon Gaze. Unlike those modern Vita titles, Shining the Holy Ark lacks the classes and sub-classes that let you customize your team. Arthur and his friends’ roles are already laid out for them. Melody will never hit hard with her staff, but she will prove to be a valuable healer. Doyle can’t use magic, but his swiftness lets him act first. Lisa is balanced with both attack power and healing magic, but she’ll never be able to set an enemy ablaze.

The dungeons in Shining the Holy Ark are labyrinthine mazes that pull no punches. They are long, they lack save points, and they are filled with hazards. Some of them have puzzles that range from flipping switches to solving arithmetical problems. Navigation is done in the first-person. As you move about, a map gets drawn for you. You will be referencing this map quite often, too. Luckily, that means that there are plenty of wonderful treasures and secrets to discover. Aside from items, weapons, and armor, Arthur and his team can find fairies, pixies, incubi, succubi, and leprechauns in hiding in crevices, pots, and anywhere else. Those that enjoy searching every nook and cranny of every place will feel a rush of excitement when they unearth a new pal.

So, what do these critters do? They launch a preemptive strike in battle. In Shining the Holy Ark, every enemy makes a unique entrance. Ghosts will appear from the left or right from a wall. Giant crabs will click-clack behind a corner. Angry demons will come charging at you. Some enemies will even pop from the ceiling. To make the most out of your pixies, you need to have them ready to go depending on which way enemies arrive. If you have the right pixie assigned and hit a button before enemies ready themselves, they will bumrush the foes and cause damage. It’s a fun little gimmick that rewards you with extra money and experience points. Once the pixies are done, the real battle begins. Shining the Holy Ark features a classic, turn-based battle system. At the start of a round, you will input commands for your team. Then, the action will play out. Similar to the dungeons they reside in, enemies don’t pull punches. This is a hard game. Even the starting enemies will take a bit of time to take down. Unlike more contemporary dungeon crawlers, options in battle are more limited. You have standard attacks that sometime result in a special critical attack, attack magic, healing magic, support magic and items. That’s about it. However, the game always gives you enough tools and resources to use. Standing face to face with an Ice Siren? Put her to sleep with the Sleep spell. Encountering a group of bats? Use a spell that hits all enemies. The battles always move at a swift pace, so it makes some of the necessary level building quick and painless. If you think the regular mobs are tough, then wait until you get to one of the bosses. They usually come teamed up with some high-powered baddies, and they have the ability to take multiple turns. Everything in Shining the Holy Ark hits hard, but your squad of warriors is part of that “everything.” To help put them on equal footing, the towns in Shining the Holy Ark have necessary goods available for purchase. New weapons, new armor, and new accessories are usually on the pricier side. But, they’re worth the price. Later in the game you can forge custom material by taking mythril to a blacksmith. Finally, you can save your game at a church. The church will also allow you to remove curses, give your teammates a powerful class-up, or detoxify any ailments. But, as mentioned, most of your time will be spent in dungeons. It’s a good thing they’re fun.

Shining the Holy Ark is a gorgeous game. From the huge, grandiose entrances that the bosses do to the tiniest of details found in the smallest corner of a haunted mansion, the game looks amazing. While it does suffer from some slow down during a few battles or while traipsing through town, the game has aged very well and runs smoothly. Accompanying the graphics in more ways than one is a fantastic score of music from Motoi Sakuraba. His style and influence perfectly matches the atmosphere of the towns, dungeons, world map, and more. There are some great tracks in this game. Fans of developer Camelot will immediately recognize the sound blips that get played during conversations. It’s a nice touch, but it feels out of place for a game that is on the darker side.

Despite its grueling challenge, Shining the Holy Ark doesn’t outstay its welcome. Most players will be able to finish the game in about 30 to 35 hours. Once the game ends, it’s hard to go back for more. Replay-ability is probably Shining the Holy Ark’s biggest flaw. The game is a blast, but there is little incentive to go back for a second run; at least immediately. But! There will come a time when I’ll be in the mood for a game that is a reflection of an era in which quality was important. Sure, Shining the Holy Ark has a few issues, but going through it is a reminder that there were game developers out there that cared about what they gave to the public. Sega Saturn owners would do well to seek this game out and enjoy said quality.

Overall, 9.5/10: Shine on! Shining the Holy Ark is an RPG that will appeal to everyone.