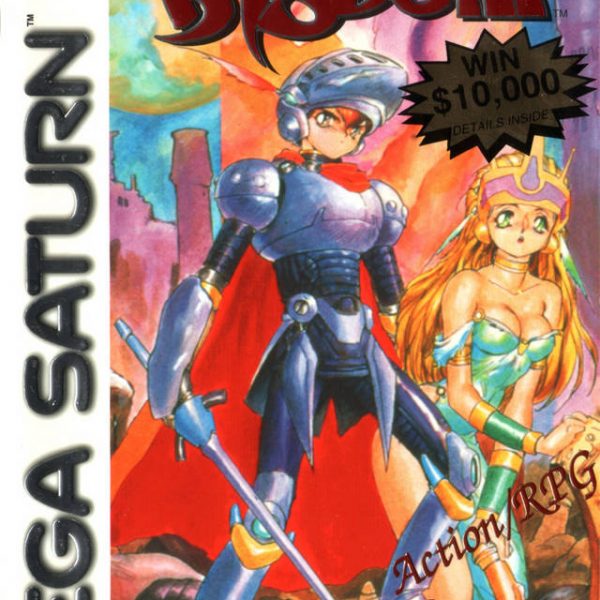 The long running Shining series has the look of something that would adhere perfectly to my taste. Each game has a fantastical setting with humans, elves, dwarves, magic, and plenty of mythological lore. The titles that have the most adoration are SRPGs. I like it when companies take risks and break out of their comfort zones and make games that aren’t what the fans are used to. This was the case for Shining Wisdom for the Sega Saturn. One of the console’s rarer games, Shining Wisdom has the Shining name attached to it but is the opposite from a strategy game. Shining Wisdom is an action RPG that has a promising look, but game mechanics that can only be described as annoying and liberties taken with the script make it difficult to recommend to fans of action games and to fans of the Shining series. Furthermore, actually acquiring a copy of this rare title is a costly investment.

Shining Wisdom takes place in the land of Odegan. The princess of Odegan Castle has been put into a deep sleep by dark forces and the king has been put under pressure to meet an evil wizard’s demands. Players take control of Mars, the son of a famous knight. On his first day of work as a castle guard, everyone but him gets put under a spell of deep sleep. Mars ends up following one the wizard’s minions to an underground cavern where a variety of secrets will be revealed. The revelations from this cavern will take him across the country; far beyond the safety of the castle walls. The fate of Odegan is now in Mars’ hands. This is a typical save the world story, but Working Designs took control of the script to make things livelier. The villains sound more diabolical, the NPCs have more entertaining things to say and the overall level of conversation sounds more believable. That said (and this is hearsay) Working Designs took some liberties with the script. A love story, weird names and a lacking of references to other Shining games cause the script to lose credibility. I never played the Japanese version, so I’m not sure if this is true. But, it’s been said a few times by critics.

Of course, the story in an action game plays second fiddle to the…well…to the action. Unfortunately, Shining Wisdom’s action is subpar at best, and annoying at worst. Mars looks like he’d be able to defend himself from goons and bosses alike, but Sega decided to implement some ideas that didn’t take advantage of the Saturn’s functionality. For instance, Mars has a slow walking speed. In most RPGs of (and before) the time, you would hold a button to run. Shining Wisdom decided to do something different. If you don’t wish to move at a snail’s pace, you need to mash a button until Mars’ speed gets to where you want it. Then, you need to hold the button. Let go of it, and his speed goes down. The button mash begins again. If his normal walking speed was quicker, it wouldn’t be as big of an issue. But, it is an issue because it ruins the overall flow of the exploration.

Another issue is the combat. One of the neat things about Shining Wisdom is that Mars can combine magical orbs with his weapons to use powerful abilities that can deal damage and solve puzzles. This part of the action is great. That exciting feeling you get when you earn a new orb can only be satisfied by seeing it action. The bad news about the combat is how you actually need to equip these items. Now, keep in mind that the Saturn controller has six buttons. So, why did the creators not make it so one button was always set to the weapon? Instead of this idea that makes perfect sense, your sword and other various items you get can only be assigned to the same button. Here is an example from one of the earlier dungeons in the game. Mars will find a pair of boots that let him stomp on the ground and kick heavy blocks out the way. To use these you need to open the menu, remove the sword from the assigned button, equip the boots, solve whatever puzzle requires these lovely boots, open the menu back up and re-equip your sword. Since Shining Wisdom is full of puzzles, this process gest tedious at an alarming rate: see a puzzle, open the menu, equip the right item, solve the puzzle, reopen the menu, re-equip your sword and carry on. All in all, this another odd game play choice completely ruins the momentum of what otherwise would be a simple yet solid action game.

This is really unfortunate because the game looks great. Shining Wisdom takes place in a colorful, top-down world inhabited by crisp, 2D sprites that even give games like Secret of Mana or Alundra a run for their money. Mars’ magic attacks are entertaining to behold as he goes head to head with enemies of all shapes, races and sizes. In the story events, the dialogue boxes are accompanied by talking portraits. This is classic Shining fare, so I’m glad they kept this feature. There is an opening movie for Shining Wisdom that attempts to set the mood fro the adventure. But, seeing as this is the Sega Saturn, the movie can only be described as an awkward attempt at utilizing capabilities that the Saturn is not known for. Remember, the 3D stuff was the forte for the Nintendo 64. It was a bold choice, but everyone knows that the Saturn should stick with 2D. The music in Shining Wisdom is probably the highlight of the game. You can listen to any track you want from the start of the journey by simply opening the menu and selecting whichever song you like. Of course, actually listening to the songs in their respective areas adds to the effect and feel of the adventure. I recommend folks giving some songs a listen even if the rest of the game’s content isn’t enough to spark some interest.

Shining Wisdom isn’t a bad game. The story has a classic vibe and the dialogue and character’s personalities have been translated with care. My problems with it might not matter to other people. As evidenced by its price tag, Shining Wisdom clearly has some popularity. However, the people who are used to games like Zelda or Alundra will likely be thrown for a loop when they see what you need to do to make Mars as useful as intended. Shining Wisdom has the look of a promising action RPG and the soundtrack to match. While the combat does have some (pardon the word choice) shining moments, most of it is spent in menus or mashing a button in order to actually move to your next destination with reasonable speed. Fans of the series might enjoy it. Fans of action RPGs might enjoy it. I consider myself to be both, but I can’t find the enjoyment. Therefore, this is a game I don’t recommend. This is especially true considering how pricey it is these days.