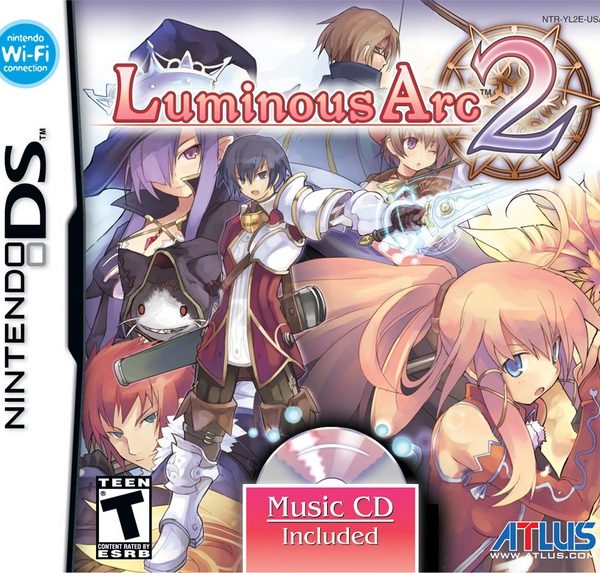 There are times when I regret not picking up games the day they get released. I usually rationalize that the games will either be readily available down the road or they won’t be worth it. In the case of Luminous Arc 2, I was wrong. Super wrong. I continue to kick myself for not getting this game on the day it was released because I enjoyed the first game and because I almost missed out on a great title and I didn’t realize how scarce it would become. Sure, Luminous Arc 2 has a few hiccups but the end result is a game that is better than the first and provides gamers with a stylish strategy RPG.

For those wondering, there is no need to play the first game to fully enjoy the sequel. Other than a couple of cameos, Luminous Arc 2 is a separate story. It takes place in the Kingdom of Carnava. Roland, the hero of this title, is a knight that has just finished another day of training with his father Steven, his brother Rasche and his friend Rina. On the way to a festival, Roland runs into a witch named Althea that dreams of becoming the next Mage Queen. Of course, this meeting with Althea sets some drama into motion. Fatima, the Shadow Frost Witch is running amok throughout the kingdom and is currently after Althea. Althea needs the help of Roland and his friends to stop Fatima, but you can probably guess that there is more behind Fatima’s ambitions than just destruction. It’s another fantastic tale of witches and warriors with some fantastically fleshed out (literally and figuratively) characters. Each character you get to know has something unique about them. In fact, one of my problems with the game was finalizing my battle party of six. You get nearly 20 characters that have so much personality and identity. Personal favorites include the fierce Fatima, the aloof Sadie and the adorable Pip. Not only does each character have something to contribute to the story, they also have something to contribute to battle.

At the start of a battle, players select up to six characters to participate. In story battles, you’ll notice that some of the characters have heart-shaped icons over their heads. I’ll talk more about those later. Once you select your party, the battle begins. You can use either the stylus or the control pad to move and issue commands with all of your characters. At a glance, Luminous Arc 2 is standard strategy stuff. Characters move across the isometric field and can attack, use magic, use items and/or use their Force Drive. To use a Force Drive, you need at least 100 Drive Points. These are obtained by performing any action in battle. However, you can use your DP to enhance your other actions as well. If you want a spell to do more damage, just add your DP. That’s just one example. It’s a nifty little feature. At the start of the game, Roland will obtain an item that lets him use the Engage command. Doing this lets Roland transform, earn upgraded stats and use a unique Force Drive. He’ll also obtain new skills. This transformation will last a few turns before he reverts to normal. Roland will get new Engage options as the story progresses. With plenty of characters, Roland’s transformation ability and a huge amount of skills to learn, battles are never dull in Luminous Arc 2.

In fact, the challenge has been upped a few notches since the first game. First, characters no longer fully recover upon a level up. Second, you can’t earn the infamous 30 experience points when you use a spell or item on an ally that has a higher level than the user. Finally, you can’t grind for Philia Points. Remember that heart-shaped icon I talked about earlier? You need to fill them up with Philia Points to improve their abilities in battle. In the first Luminous Arc, you could select a random battle field and pick the character you wished to boost. After the battle ended, you would enter an Intermission and be given dialogue choices. Answer correctly, and you get a boost in PP. Now, you only have the opportunity to build relationships with the one of two or three characters after story battles. At the end of a story battle, you will enter the Intermission that offers dialogue options for Roland. If you select wrong the wrong choices, you will get a Normal or Good Break. These indicate you earned a small amount of PP. You need to answer correctly to get the Best Break, which yields a high amount of PP. You only get once chance to enter the Intermission. By the end of the game, chances are you won’t get any of your allies a full heart unless you use a guide.

The lack of chances to earn Philia Points was a huge disappointment. Even if there are characters I didn’t care for, I still wanted to learn more about them and I didn’t get the chance to do that. Another issue with the game is that the difficulty spikes tremendously near the end of the game. While you can grind for levels by finishing Guild Quests, it’s still a surprise to see enemies OHKO your team. I never received the game over screen, but I came damn close.

Even with outside preparation, the game will challenge you. All characters can equip weapons, helmets, armor, items and Lapis’. Most characters have unique weapons that fit their personality. Sadie uses trumpets, Luna uses fans, Pip uses a giant whisk, and that’s just the beginning. All characters can equip up to three Lapis pieces. These can boost stats, prevent status ailments, add maladies to their attacks, and so on. There is more customization in Luminous Arc 2 than meets the eye. Despite the game’s linearity, no two games can be the same due to the huge cast of characters and the amount of Lapis’ available. Also, certain dialogue choices that you can make mid-battle will determine which of the two endings you will receive.

Luminous Arc 2 looks like its predecessor. The sprites are crisp and detailed. The colors are bright and big. Most of the skills are flashy and fun. Activating a Force Drive displays an anime cut-in on the top of the screen and you can watch the fury unfold on the bottom screen. There are even a few animated scenes thrown in the game for your viewing pleasure. Unfortunately, the dialogue sequences play out in boring format with one character on the right and another on the left. They could have used the sprites to show the more dramatic scenes instead of this tired style. Furthermore, for a game with such personality and flash, the lack of monster designs is a real downer. Luminous Arc 2 has a great selection of music and solid voice acting. During certain parts of the story and during battle, characters will speak. While there could have been more, the cast does a good job of giving their respective character(s) believable personalities.

Finishing Luminous Arc 2 will take about 30 hours. That time can be extended due to a variety of side-quests and the guild. There is also a fantastic New Game Plus feature that lets you carry over all of your money, gear, levels and Philia Points. Beating the game also nets you some bonuses such as a movie gallery and a sound library. With two endings and a variety of characters, Luminous Arc 2 has plenty to offer those that wish to go through the game a second time. By the time I finished the last (and brutally difficult) boss, I was sad to see the credits because I would have been happy with more. I can easily see myself going through the game a second time, this time with the aid of a guide to max character’s affection levels and try out new members of the party. Fans of strategy RPGs, and especially the ones that really enjoyed the first Luminous Arc should pick up Luminous Arc 2. If you happen to find the game new, you’ll get the game in a unique collector’s box accompanied with a music CD featuring eight tracks from the game. If you’re not willing to pay for that, you should still figure out some way to check out this fantastic, hidden SRPG secret. It has a few flaws, but the end result is worth anyone’s time. I just regret not playing it sooner.