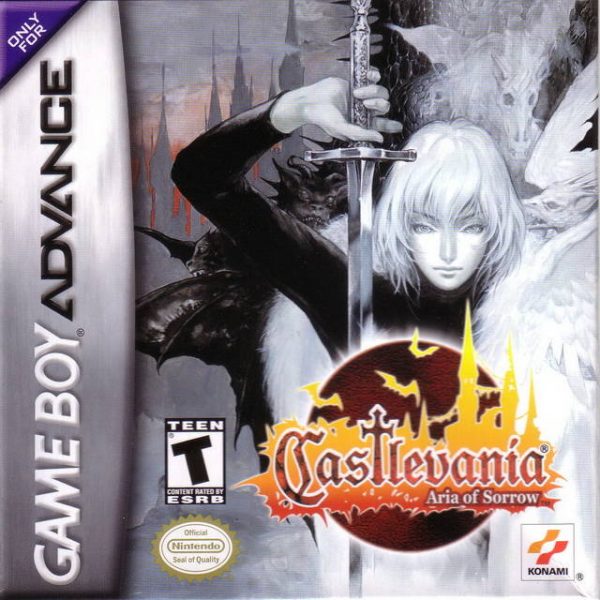 Author’s Note: This review was originally published on December 5th, 2007. Like other reviews around the time, I divided review sections with “witty” taglines.

Some of the best things come in threes. The Game Boy Advance Castlevania games are no exception. Combining open-ended map exploration found in Symphony of the Night with new characters and ideas, each Castlevania on the GBA has provided me with hours of enjoyment. The final game, Aria of Sorrow, follows this trend and does it well.

On a Cruise.
Instead of putting you in control of a Belmont, Aria of Sorrow has you controlling the mysterious Soma Cruz. This white haired man is visiting a friend as an exchange student in the year 2035. During a conversation near a Shinto shrine, Soma’s friend Mina swoons and becomes unconscious. A mysterious man named Arikado tells Soma that he has to save her from an evil that is afoot. Soma ends up entering the mysterious Castlevania that appeared directly after Mina’s sudden change.

Despite the futuristic setting, everything about the game seems as though it takes place in the same era as most Castlevania games. The year 2035 was probably added to just change things up. Regardless, the story is not much to note. However, there are multiple endings and very cool characters to meet during Soma’s quest.

A Tale of Souls and Swords.
Yes, that title line is from Soul Calibur, but it applies to Aria of Sorrow. Soma has the ability to absorb the powers of all of his enemies. These powers can range from throwing a bone, increasing his stats, surrounded himself with a barrier, or even hurling a giant fireball. Regardless of the skill he has, it will consume hearts. The soul system doubles as your magic system and your sub-weapon system. I really enjoyed collecting the souls of my foes, although it took too long to obtain a few of them. If you have a friend, you can trade souls with one another.

Besides the souls, Soma has a plethora of weapons and armor at his disposal. The legendary whip is something Soma will never handle, but he will have an endless supply of weapons that can give the whip a run for its money. With so much customization and variety, exploring this Castlevania is addicting and fun.

Bright is Right!
It looks like the folks at Konami learned that they had to brighten the graphics up quite a bit for it to be seen on the GBA. The graphics were gorgeous, and were improved from Harmony of Dissonance. All of the skills that Soma learns look great, and be prepared to face off against some gruesome looking bosses.

Classic Composition.
Aria of Sorrow may take place in the future, but the music is as classic as ever. Each track is catchy and upbeat, much like it is in most Castlevania titles. The sounds were equally well done. From attacking to zapping, the sound was done well.

The End?!
As I said earlier, there are multiple endings. Getting the true ending will take some thinking, and some hard work. However, the ending is worth viewing. Also, there are a few extras to play when Soma is done with his 10 hour quest. Castlevania: Aria of Sorrow is an excellent title to pick up and play. It has loads of customization, an exciting castle to explore, and plenty of secrets to unlock. The final Castlevania in this GBA trilogy is the best one yet.