Time to pay tribute to the game that started it all. 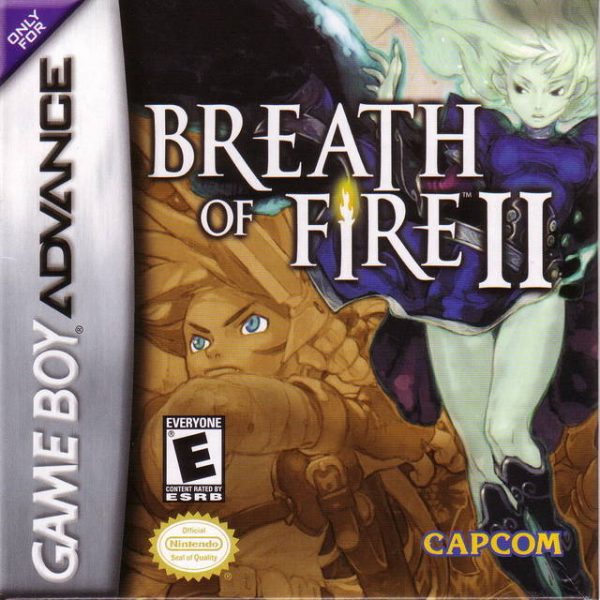 Author’s Note: This review was originally published on July 11th, 2003. It was written during a time when my nerd rage was strong and scathing. I made some alterations to the review years later. I still rank this as my least favorite in the series, but the rage has subsided.

The game starts 500 years after the events of the Light and Dark Dragon Clans do their thing with Tyr, the goddess. Now, the new Ryu is a ranger with a mysterious past. Together with his friend Bow, they get mixed up in a certain turn of events that reveals the truth about the world, Ryu, and a church called St. Eva. Along the way, they meet unique characters that help them along in their quest.

There’s a lengthy quest to be played here that will span multiple hours. Ryu’s unique friends develop surprisingly well over time. Unfortunately, it’s also a quest littered some of the worst translating ever. If I were to keep track of the amount of typos, I’d have the same amount of pages as a term paper. I would’ve thought that they’d learn from the SNES version. The GBA port allowed the creators to fix the typos and rehash the script so it sounded more realistic. The translation doesn’t stop you from being unable to understand the story, which is good because the story is one of the highlights of the game. It’s just that it’s hard to take certain parts seriously when things are lost in translation.

Playing on the field is pretty much like the first BoF. The menus are very easy to learn, and there is a monster meter at the top of the screen telling you if monsters are active. It’s all pretty basic. One neat thing is that you can build your own town and select who you want to enter it. Some guys open weapon shops, others paint your houses. Town building is one of the most fun things the game has. All of the options for the town make the game unique with each play. As you travel the world, you’ll meet shamans. The shamans, which represent various elements, will join with your characters and allow them to transform into new shapes. Breath of Fire II has a good amount of fun, but there are some major problems with the game’s exploration. The first is the fact that most of the stuff suffers from incoherent abbreviations. Another is that the game forces you to often times use a certain character to reach the next story event. This could spell disaster for you if you haven’t trained a certain character enough. The fishing mini-game has returned, but it’s a lot more touchy than the first game. Battles are similar in that there’s both good and bad. Neglecting to include the awesome Marble 3, battles randomly occur and it gets annoying very quickly. Sometimes, it’s EVERY THREE STEPS YOU TAKE!!! And that’s just the start of it. Just like the first BoF, you have four people in a party at a time. But, this time you can’t change your party members in and out! Each character has their own special skill. While this may sound good, it’s actually pretty worthless. For instance, Katt has the Dare ability. What does it do? It makes all the enemies focus on her. This wouldn’t be so bad if she didn’t have lousy defense. Dragon Transformations took the biggest hit. Ryu no longer lasts the entire battle as a dragon. Instead, all of his MP gets used when you transform into a dragon for a super-powerful attack.

The graphics are excellent. The fields and dungeons are designed somewhat nice with plenty of color. Character sprites have a lot more motions than they did in the original Breath of Fire. The characters are also designed well, and look even better in battle. Monster designs, while sometimes questionable, have a large amount of variety to them and look much more detailed than before. Where the graphics are excellent, the music is the opposite. It’s awful. The tracks are short, thus repetition will be the name of the game here. The sad thing is, most of the songs aren’t good. Some, like the tune that plays in Windia or the boss music, are well composed. The rest? Yeah, not so much. The sounds in the game are fine, but you won’t notice them. Because of the music, you’ll probably hit the mute button and not here the sounds as a result.

Like I said, Breath of Fire II takes a while to complete. You can be looking at a 50 hour quest if you want to see it all. Once it’s over, it’s over. Having gone through the game again, I can say that it’s not as bad as I thought. There’s a lot of stuff to do as you uncover the mysteries of St. Eva. Had the translation been better and had Capcom not taken out the good stuff of Breath of Fire, it’d be a huge success. Instead, it’s just a good game that has it’s fair share of flaws. That all said, I can say that it’s still worth playing if you’re a fan of the series.

Overall, 7/10: Breath of Fire II might be missing the right toppings for the perfect pizza, but it’s still pizza in the end.