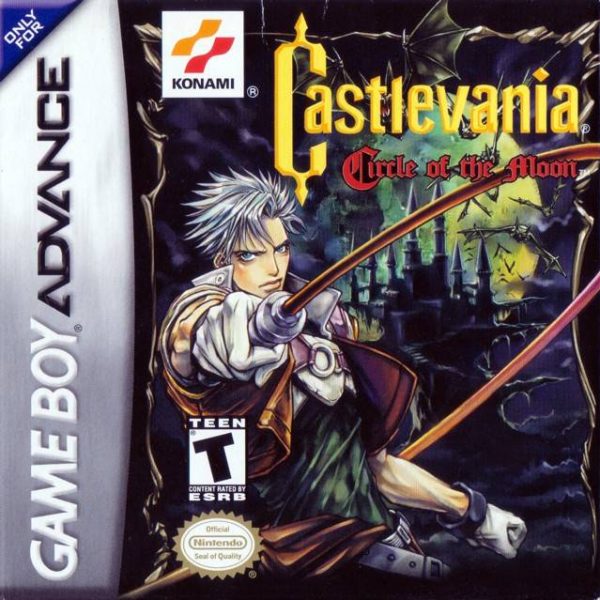 Author’s Note: This review was originally published on November 1st, 2007. Like other reviews around the time, I used “witty” taglines to divide the sections.

Considering that Castlevania: Circle of the Moon was my first GBA game, and that I have been reviewing for a while now, I suppose it is time to pay my dues to this entry in the long-running Dracula slaying series. While IGA may have discounted the game as an actual Castlevania title, that does not stop the game from still being an addictive way to pass the time. Fun as it is, the game does have one giant problem that could make it or break it for some casual gamers.

He’s Back…
The mysterious Castlevania has reappeared. That can only mean that Count Dracula is ready to start feeding on the souls of men and the blood of the innocent. Only a select few are brave and daring enough to enter the cursed palace in hopes of sending Count Dracula back to the darkness. Surely, one of Belmont lineage can bring him down. Unfortunately, there are no Belmonts present at the time. Instead of the hero being played by the next Belmont, the hero is Nathan Graves. Nathan wields a mighty, legendary whip passed down from his mentor, Morris Baldwin. Morris gave said whip to Nathan, not to his son Hugh. Needless to say, there is some drama going on between the two pupils. Upon entering the castle, the three warriors are greeted by the evil Carmilla. The floor gives way, and Nathan gets separated from the other two vampire slayers. Now, Nathan must deal with the competition between himself and Hugh, the monsters of Castlevania, and the vile Count Dracula.

Even without the mentioning of a Belmont, Circle of the Moon has a classic story of good versus evil, and human versus vampire. Was I a bit ticked that there were no Belmonts available? Yes, just a bit. However, I got over it when I realized that Nathan had the same morales of a Belmont. The characters were nothing special, there were no plot twists, no revelations, and no mysterious pasts. Instead, you have good old vampire slaying. I still question how Morris Baldwin got the whip in the first place. Regardless, the story is the same as it has always been; it’s there but not entirely necessary.

Romping Around in a Circle.
Exploration in Circle of the Moon is as classic as ever. At first, Nathan may seem like a rather unworthy vampire hunter due to his limited move set. Over time, he can and will develop into a mighty warrior. Besides having a variety of sub-weapons at his disposal and using the whip with great skill, Nathan will be able to level up over time. There are various pieces of equipment that he can equip, and certain items he finds will grant him more skills he can use while fighting vicious monsters. These include a double jump and a running dash.

Speaking of the monsters, I must agree with most of the people who have played this in that Circle of the Moon is one of the more difficult Castlevanias out there. While nearly anyone can get through it, there are some tricky parts. Some monsters attack in swarms, others will do massive damage if you fail to dodge their attack, and certain bosses have very powerful finishing strikes. Maybe it was me being spoiled by Symphony of the Night’s lack of difficulty, or maybe it was the fact that I was having a hard time adjusting to the fancy GBA. Whatever the reason, I had a hard time getting through certain instances in this game. At least, that was until I took advantage of the DSS system.

Pick a Card, Any Card!
Up to this point, the game has been pretty standard Castlevania fare. Usually, each new edition to a game has a new feature added that was not seen in a previous title. For Circle of the Moon, it is the DSS system. As you voyage through the castle, often times you’ll face monsters that can drop certain items. Sometimes they drop hearts, other times they could drop potions. Another one of these items is a magic card. By combining two cards with each other, Nathan can increase a certain statistic of his (like ATK, LUCK), send down a bolt of lightning, get more hearts from candles, and tons of other options. There are 100 different options of combinations for you, and finding all of the cards will take a lot of work. However, the work is worth it. While performing magic spells and such can make the game significantly easier, it also makes the game more fun. There is nothing more exciting than putting two cards together and witnessing the combination in action.

The New Moon Rises.
Circle of the Moon is fun and addicting, like most Castlevania games. However, there is one problem with it that adds to the game’s challenge. If the challenge is programmed, that’s fine. However, if the challenge comes from creator error, that is another thing. Circle of the Moon is dark. Very dark. Unless you are playing with a bright light or in direct sunlight, you are going to have a hard time seeing your screen. When you do see the graphics, you’ll see an uncanny resemblance to Symphony of the Night. CoM may not be as detailed as SotN, but it still does a nice job, graphically. The sprites are vivid and the monsters look great. Some of the bosses take up half of the screen. As one of the first GBA games ever, Circle of the Moon showed off the difference between it and the Game Boy Color. Still, being able to see this comparison will take some effort.

The 16 Sound Era.
While the GBA is an upgrade from the GBC, one thing has remained unchanged: musical quality. Circle of the Moon sounds decent, but the sound effects seem like they came straight from the earlier SNES era. Maybe I was hoping for something that was out of reach and got let down. If worse comes to worse, you can alway turn the sound down.

The Moon Falls Again.
Circle of the Moon is about 10 to 15 hours. There is a massive castle to explore, and you will be doing plenty of backtracking. While there are teleportation devices scattered throughout the dungeons, many of the rooms are long corridors that seem to take forever to traverse. Furthermore, a true fan will wish to gather all of the cards. Since most of these cards rely heavily on luck, it will take a while to get all of them. However, the rewards for doing so are well worth it. Once the game is over, there is no reason to go back for more. While Castlevania usually has a large replay value, I find it hard to come back for more. Castlevania: Circle of the Moon has a major graphic problem that often hinders game play. When you overcome that, you are left with a great game that is both addicting and fun. Konami and Nintendo did a great job with releasing a Castlevania game along with the Game Boy Advance.

Overall, 6.5/10: Castlevania fans and action game fans alike should check out Circle of the Moon, and put an end to Dracula’s dark ways. Just grab a light source so you can see what you’re doing.