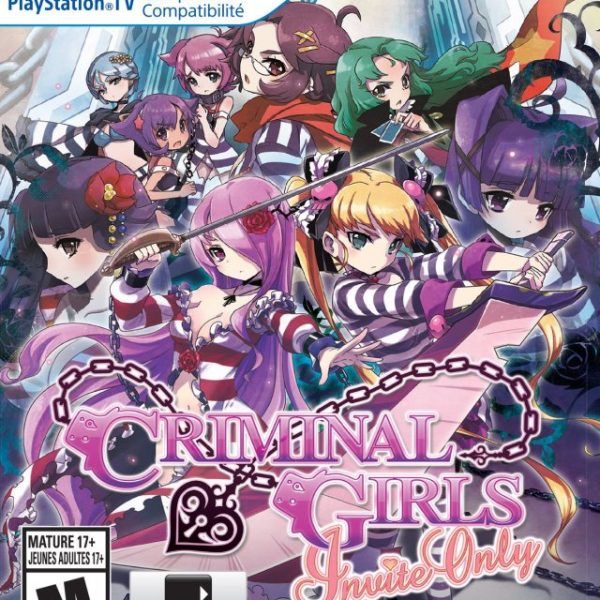 When someone mentions the topic of censorship, I usually stay out of the incoming, inevitable debate. However, after playing Criminal Girls: Invite Only, my stance on censorship has shifted dramatically. I haven’t played many games that received a good whack with the censor-stick, but I hope that ones I play in the future don’t receive it in such a way Criminal Girls: Invite Only did. Indeed, the way NISA butchered certain parts of an already M-rated game make it seem worse than originally intended. But, I can get to that later. For now, I will say that Criminal Girls is a quirky RPG that has more than meets the eye. I recommend it to all Vita owners as long as they are confident enough in their gamer pride.

Originally available in Japan on the PSP, Criminal Girls puts you in control of a warden in charge of reforming a group of seven girls that have been sent to Hell to atone for their sins. After being introduced to your group of delinquents by a woman named Miu, you begin your journey through Hell’s various trials in order to get back out into the mortal world. Of course, this so called Reformation Program has plenty of secrets. Similarly, the past of each girl will come to the forefront the closer you get to the end. Criminal Girls has more story to it than one would expect. The initial segments are lacking in dialogue, character development and plot but as you get further and further through Hell, the story will go from non-existent to great. I really enjoyed learning about each character. My personal favorite, Ran, had the most surprising backstory regarding why she ended up in Hell. The Vita version of the game has additional story content that was not found in the PSP version.

Navigating through Hell’s trials in Criminal Girls is simple but fun. The majority of the game has you moving from map to map gathering treasures, fighting enemies and witnessing story events. Infirmaries are located throughout the levels and once you activate one, you can warp back to it from another infirmary. Infirmaries allow you to rest, save your game, shop for items with CM and, most importantly, participate in the motivation mini-game that teaches your girls new skills. Motivating your girls also requires CM. You earn these precious points from battles, along with experience points. Gaining levels after earning enough experience is important, but it is critical to motivate your girls as often as possible so they can unlock new abilities.

Motivation requires the use of the Vita’s front and back touch screens. There are five types of motivational mini-games that will get unlocked as you advance the story. Each of these five mini-games will let your girls learn four skills. So, as you can imagine, you’ll be playing this often. Once you pick the girl to motivate, they are presented to you in a compromisingly suggestive position and you need to touch certain icons when they appear. The faster you motivate them, the higher your score. Ultimately, this determines how much faster you learn a new skill.

Just based on the motivation mini-game, Criminal Girls is not meant for children and the M rating is warranted. I have a few issues with it. The first is that the Vita’s rear touch pad isn’t as responsive as the front. Another issue is that doing the same task over and over gets tedious near the end of the game. My biggest issue is about its censorship. In the Japanese version of the game, timing your presses right will result in the girl moaning, gasping, uttering a phrase here or there and so on. The girls are silent as church mice in our version. In both versions, the girls will start off surrounded by pink fog. As you achieve higher levels, some of the pink fog will start to disappear resulting in a clearer image of her. By the time you reach the fourth skill, you can see just about everything in the Japanese version. However, in our version, this pink smog is not only still prevalent, but it is placed right near the girl’s private areas. In other words, it looks like each character is performing un-lady like behavior. It’s bad enough that the moronic imbeciles at NISA added this censorship, but they somehow managed to make the game look -WORSE- than intended. Remember, you will be motivating your girls constantly, so you have to be prepared to see this nonsense. I question why the game was released in the first place if the publishers decided to muck it up. I understand that Criminal Girls was developed for a certain type of gamer, but that doesn’t mean that others may not find something to enjoy. Why would you localize it only to turn away those it was meant for? Heck, there are far worse games on the market that deserve much stricter censorship.

Now that I’m off my pedestal, I can continue. Battles in Criminal Girls are fun. You can have up to four girls in your party and can switch at any time. Instead of picking their actions like in most RPGs, each girl will offer suggestions. You can only pick one of the four girls’ suggestions, which means only one girl might end up acting on your turn. Most of the time, the suggestions will work in your favor. While there are times when their suggestions prolong the battle, the majority of the time they are fun, fast and rewarding due to them having more strategy than expected. Near the end of the game when you have more skills unlocked, battles will become much easier. Still, Criminal Girls can be a challenging yet enjoyable title thanks to its unique, turn-based battles. Since there are no pieces of equipment to purchase, you will have to be ready to swap out girls as needed since each girl already has a designated role. Ran is a defensive powerhouse, so including her during boss fights is important. Sako is a heavy hitter with fire based abilities. Conversely, Alice is a glass-cannon wizard that specializes in ice magic. Yuko is your healing specialist, but she also has abilities to drop enemy abilities. There is never a right or wrong party, so finding a group that fits your playstyle adds to the fun. Along with new skills learned via motivation, certain treasure chests contain team attacks that can turn a battle from seemingly impossible to problem free.

The graphics in Criminal Girls are basic, but their brightness and color scheme get emphasized by the Vita’s capabilities. On the field and in battles, each character is in chibi form. During motivation and in the infirmary, they are drawn to scale and look fantastic. Each girl has a unique look that further highlights their personality. That said, I question what the artists were thinking when they drew Sako’s and Yuko’s hair. Monsters have a unique design that have a fun yet fear inducing style. Finally, there is a lot of art to unlock. Unfortunately, the music didn’t fare as well. The tracks are forgettable and use awkward instrumentation. Lastly, the entire game is voiced in Japanese. I didn’t mind this, but I know that there are folks out there that find this to be a deal breaker.

Finishing Criminal Girls does not take long. Despite all of the necessary motivating, reaching one of the game’s many endings will take about 15 hours. However, earning all of the endings, going through the bonus content and achieving 100% trophy completion will double that number. People interested in this game should understand what they are getting into. This is not a game meant for a younger audience, not just because of the motivation mini-game, but because of the some of the story elements dealing with some controversial subjects. Still, those that do purchase it and don’t mind the unnecessary censorship will be surprised. When you take away the sex appeal, you still have a game that offers fun battles, a unique plot and some memorable characters that will grow from delinquent devils to inspirational women. Nearly all fans of RPGs will enjoy Criminal Girls: Invite only. Just remember to be cognizant of what you’re getting into.