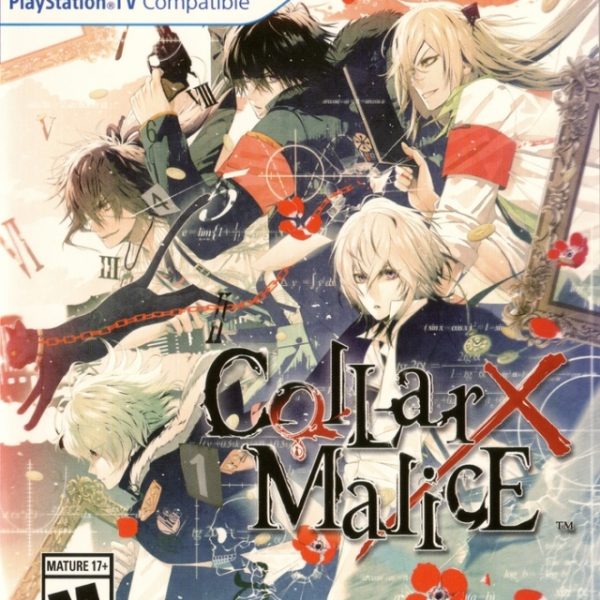 When I stumbled across Norn9: Var Commons, it was its cover art that immediately drew me in and made me curious about more. It was a decent read, but it didn’t really make me excited to seek out other visual novels. In the case of Collar X Malice, it was the game’s title that caught my interest. The unique, stylized title caught my eye and lead me to, once again, taking a risk with another visual novel. Unlike Norn9, Collar X Malice provides a gripping narrative due to straying away from the typical formula. Instead of playing as a young girl looking for love, Collar X Malice tackles issues like gun control, government trust, and police brutality. Romance still plays a part in this story, but the romance’s toned down level allows the aforementioned themes to be further explored.

Collar X Malice takes place in Shinjuku,Tokyo. Normally a bustling and energetic city, Shinjuku’s people have been gripped by fear due to a terrorist group called Adonis. Since their arrival, Adonis has been publicizing murders of police officers and government officials in order to enact their own form of justice. With each murder, they announce that they are one step closer to X-Day. It’s unknown what will happen on X-Day, but Shinjuku has been quarantined from the rest of Japan in order to keep Adonis from spreading more panic. A new police officer named Ichika Hoshino has received an order to investigate a possible lead that could be related to Adonis and the X-Day Murders. When she makes it to the meeting spot, she gets knocked out by an assailant. After waking up, she realizes that a collar is tightly locked on her neck. To remove the collar, she must comply with Adonis’ wishes. Otherwise, the collar will inject a deadly poison.

Hoshino’s predicament is terrible, but she’s not alone. She’ll get the help of ex-police officers, scientists, computer hackers and more. Obviously, these folks are handsome, single men that may offer more to Hoshino than just help with the terrorist organization. Indeed, Collar X Malice is still an otome-styled visual novel. But, while love blossoms in the background, more relevant topics will occur in the foreground. One of the most interesting aspects in Collar X Malice’s story is that deals heavily with gun control. Due to the X-Day Murders, all citizens of Shinjuku are permitted to carry firearms. Hoshino and the rest of the cast will question the ethics and legality of this decision. Other controversial issues are explored, but I feel that the gun control issue is the one that received the most attention. This was a good choice. More people need to talking about this.

As a visual novel, most of your time in Collar X Malice is spent reading dialogue. Depending on the choices you make while reading the script, you’ll end up on a path that pairs you up with one of the game’s bachelors. Once you’re on this path, the choices you make will cause Hoshino’s partner to become more attached to her. More importantly, some of the choices you make can cause Hoshino or her partner to meet a grisly fate. There are a plethora of bad endings in Collar X Malice. One wrong choice will lead you to one of them. Luckily, a quick save feature and the ability to blaze through text at blinding speed will make it easy for you to pick up where you left off.

There’s more to Collar X Malice than just reading. Sometimes, Hoshino will need to investigate a crime scene. These are fun because you will piece together an X-Day Murder and get one step closer to revealing the truth about Adonis. Playing the role as detective is nothing new for video games, but it’s implemented well in Collar X Malice. It shows that Hoshino is more than just a damsel in distress that got dealt a bad hand. Furthermore, Hoshino may have to defend herself or fire back at an assailant. The game will shift to a lite quick-time even that tasks you with pressing the X button at just the right time. These gun battles are nothing extravagant, but they’re a welcome break from the reading.

As expected, Collar X Malice features stunning character art and backgrounds. The character designs are highly detailed, expressive, and intricate. At the same time, their designs aren’t so over the top that they become a distraction from the dialogue or the background settings. The game did a great job of striking a balance in order to make the game visually appealing. I would have liked it if there were some actual animated sequences, but this is a minor complaint. The characters look great standing still; it’d be fun to see them in motion, too. The game is fully voiced in Japanese. Seeing as the game takes place in Japan, this was a good choice. You can turn off certain character’s voices if you desire. However, there is no English language option. The soundtrack features a few tunes that warrant a listen, but most of the music is forgettable.

I have a lot of praise for Collar X Malice, but there are a few issues that made me scratch my head. The most prominent one deals with Hoshino, our leading character. As an officer of the law, she gives the impression of a hard working, self-sufficient woman. For the majority of the game, she is all of those things. But, there are times when the typical, visual novel mannerisms sneak in and turn her into something else. For example, at one moment in the story Hoshino will feel glum about letting a possible suspect get away. To make her feel better, her paired bachelor pats her on the head. It causes Hoshino to blush and become a young school girl for a brief moment. Yes, Collar X Malice is an otome visual novel, so things like this happen. It just feels out of place in Collar X Malice. Other issues I have are some of the story segments outstaying their welcome and the need to look at a guide to get to a better ending.

With multiple choices and pathways to follow, Collar X Malice can last a long time. But, for those that wish to play it once and get to the end, the game is easy to go through in about four hours. Trophy hunters can follow a road map and get the platinum in as little as five hours if they decide to skip all of the text. But, doing this would cause them to miss an excellent story. Collar X Malice is a well-written, unique visual novel that tends to shift from what the genre is known for. There are some snippets of the usual visual novel isms, but they get out shined by the bigger themes: stopping Adonis from commencing X-Day and removing the poisonous collar from Hoshino’s neck. Sure, these issues can lead to a romance, but they serve as a nice bonus prize for preventing a catastrophe from occurring in Shinjuku.

Overall, 9/10: Collar X Malice’s excellent story will have you turning virtual page after virtual page. Even if you aren’t a fan of visual novels, the narrative is strong enough to make you think twice about ignoring it.