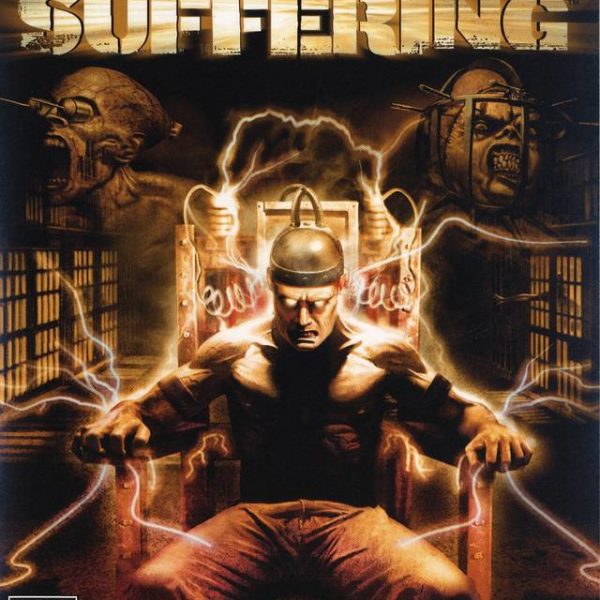 The Suffering is an action game that is not for the faint of heart. While some folks may classify it in the “survival-horror” genre, I feel that this is a misnomer. There are some horrific things in The Suffering. In fact, nothing about The Suffering is ever pleasant. Those looking for a reprieve from the blood and gore that The Suffering promises will be disappointed. However, the “survival” aspect has no place in The Suffering because Torque, the main character, is always well equipped with enough guns and ammo to take out an army. In fact, you can take a glance at him and understand just how capable he is at handling himself. Due to all of this, The Suffering comes recommended to fans of action games with copious blood and gore. If you’re looking for a true survival-horror game, then you might be slightly disappointed.

As I said earlier, The Suffering puts you in the shoes of a man named Torque. Actually, Torque goes through the game with no shoes, but that’s a different matter. Torque has been sentenced to death for the murder of his family. He has no recollection of the crime due to his frequent blackouts. Now the latest addition to Abbott State Penitentiary on Carnate Island, Torque’s future looks grim. As he starts getting harassed by fellow inmates and correction officers, the island experiences an earthquake and a power outage. Following that, bizarre and bloodthirsty creatures start slaughtering everyone in their paths. Luckily, Torque escapes his cell. Now he has to get off the island, and, hopefully, prove his innocence.

The Suffering’s story doesn’t pull any punches. From the moment things begin, there will be disturbing imagery, crass language, shocking information, and more. Those that are put off by any of that, as well as heavy bloodshed, should stay away. However, those that stick it out will experience an interesting story and cast of characters. Not only do you get to learn about Torque and his dubious past, but you’ll learn more about the history of Abbott State Penitentiary. Torque will learn all sorts of crazy things about this prison, all of which is gruesome.

It’s clear from the start that Torque is a seasoned fighter. Beyond his massive frame, he is capable of handling a variety of weapons and firearms like a pro. The Suffering can be played in first or third person. Torque can run, jump, evade, and climb through the bloody labyrinth that is the prison. At the start of the game, he’ll get a flashlight that requires batteries. To restore his health, he’ll need to pop a pill called Xombium. Scattered through various parts of the prison are documents, journal entries, and more. These will slowly piece together the truth about the jail. As you move from area to area, Torque will experience brief flashbacks that shed some light on his history. He will also run into other inmates or correction officers. During these meetings, he will hear a voice of good and a voice of evil. Listening to these voices, as well as performing other actions, will dictate which ending you get. The game will give some visual clues regarding his moral standing. Progressing through Abbott State Penitentiary is great, but there are times that it’s not always clear where to go. Maps help, but the actual objective can require some guide checking.

The moments where Torque sees things beyond an enemy are brief. Most of the time, Torque will be fighting hideous creatures that want to tear him apart. Torque will acquire various guns, dynamite, a flamethrower, and much more in order to kill these enemies. Combat is straightforward, but there are times when things can get a bit overwhelming. Torque will always have enough ammo, but health supplies can run low. This is made more apparent due to the his ability to only carry nine bottles of Xombium. Even worse? Enemies take a long time to destroy. It’s a satisfying feeling watching your enemies fall the first time. As you get further into the game and as more enemies start spawning, things can go south fast. One attribute that Torque will unlock later in the game is the ability to transform into a beast. With one hand equipped with a shiv and another with massive claws, it’s an intimidating, hulking form capable of executing impressive combos and special attacks. You can use it when his Insanity Meter is full. The downside to this is that his health will drain as the Insanity Meter drains. If the latter meter empties, then Torque will die. Combat is enjoyable, but it would have been more enjoyable in lesser doses. The shock value of the enemies will ware off quickly by the time you reach the end of the game.

Of course, the first time you see the enemies or enter a new area of Abbott State Penitentiary is enjoyable for fans of all things horror. The enemies that Torque comes up against represent either methods of execution or the history of Carnate Island. For example, Mainliners look like gremlins, but they are riddled with syringes filled with green acid. They’ll attempt to kill you by throwing their syringes or via pouncing attack. Even after you kill them, they leave a puddle of fluorescent green acid coupled with fumes that will damage Torque. My favorite enemy is the Fester. These giant, balding brutes are filled with carnivorous rats that will pop out of their stomach upon their death. Using a gun against them will dispense even more rats. The creativity used in creating the enemies and Abbott State Penitentiary is worth experiencing. The Suffering doesn’t offer much in the way of music. Certain scenes and areas offer some tracks that are easily forgettable. However, it’s sound effects make up for that. When you’re not fighting, you’ll hear some unsettling voices or howls. When you are fighting, each enemy makes a shriek that sounds like they’re in extreme pain. The Suffering delivers a solidly disturbing visual and audio experience.

The Suffering doesn’t take too long to finish. On regular difficulty, you can finish the game between five to ten hours. Thanks to a generous checkpoint system, The Suffering is accessible for gamers of all experience levels. Those that get an undesirable ending can go through the game again to try to get a different one. Those that wish to really test their skills can try a more challenging leve of difficulty. The Suffering suffers (yeah, I had to at least once in the review) from a couple of issues. Finding the trigger for Torque’s next objective isn’at always clear. Combat tends to outstay its welcome. However, I’m able to give these and a few other minor issues a pass due to how much atmosphere and visceral style The Suffering offers. Fans of action games, especially those that aren’t shy about plenty of bloodshed, will be in for a treat. Those that were hoping The Suffering was more in line with the survival-horror genre will be slightly disappointed.

Overall, 7/10: The Suffering separates itself from other standard action games by delivering a heaping helping of horrific atmosphere that is complimented by an intriguing narrative.