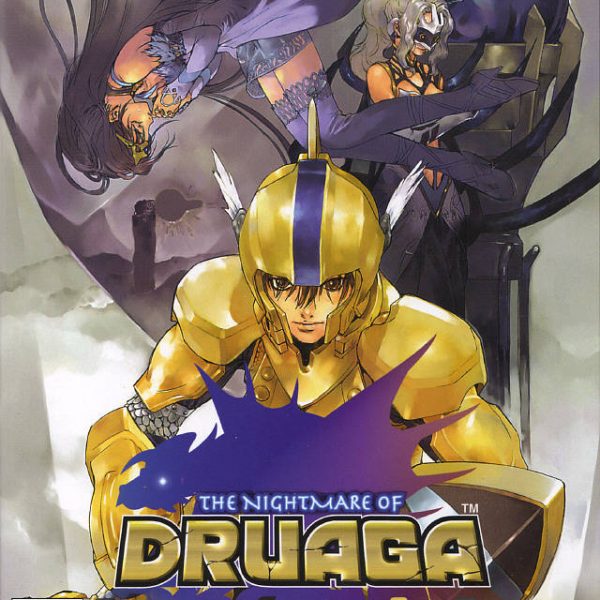 Author’s Note: This review was originally published on July 6th, 2005. It was later updated on May 5th, 2014. I’m not sure why I updated it years later, nor am I sure what exactly it was I updated.

Ya know, I love Namco. I really do; and nothing is going to change that. They make me smile with their RPGs like the first Xenosaga and their long running Tales series. But when it comes to this game, I really start to question my number 1 video game company. Seriously, Xenosaga II and now this? Well, like EB Game’s sales clerks, everyone makes mistakes. The Nightmare of Druaga is the sequel of a mega old-school dungeon crawling game called The Tower of Druaga, done by Namco. The concept of this game reappeared in a super fun side-quest in Tales of Destiny, and now it has a place in the PS2 library. Joy.

The story picks up right after the first game ended. Prince Gil and his priestess gal pal Ki are preparing for their wedding, when all of a sudden a sorceress snatches up Ki and disappears into the once forgotten Tower of Druaga. As the town of Babylim is in an uproar, Gil has to once again don his gold armor and set out to save Ki. Insert some breaks in the plot here or there, toss in a mega-predictable ending, and you got the plot line for this game. Make no mistake that I wasn’t expecting something overly deep or captivating here, but really…Namco can do better. The story should’ve been fresher, more full of interesting characters. The townsfolk only do so much for me with their couple lines of dialogue.

Which actually brings me to the town. I have enjoyed games with only one town. Take Dual Hearts and Threads of Fate for example. However, Babylim is mega boring to tromp around. It does have atmosphere, but the citizens are dryer than Oprah’s talk show. There is stuff to do, such as creating items, forging powerful new armor, and transferring skills to equipment, but it’s not enough to save the game, or Gil, from his fate to explore Druaga’s many dungeons. Yes, even hard-core item customization gets smacked like Tina Turner when you realize what you have to do to actually save Ki.

Each floor in this game has a maze like design. When you first enter, you’re given a Feather item that allows you to escape whenever you feel necessary. To get to the next level you need to find the key and then unlock the door. Since everything around you is in complete darkness, you’ll have a tough time navigating throughout the dungeons. A mini-map does draw itself out, but it is gone every time you re-enter the dungeon. WTF, mate? Gil is always glowing in this darkness thanks to his armor blessed by Ishtar the goddess. Yet, even that will slowly fade away as you trudge through the game. To get back the armor’s healthy glow, you need to sacrifice the most important part of the entire game: items. Ah, items. They are literally everywhere and provided me with the only joy in the game. Finding them is a thrill, but creating them and merging them is even better. There are acres of possibilities of items to create. However, where there are items…there are monsters. This is where Gil has to brandish his sword and fight for all that is good! Well, sorta…ok not really. By brandish his sword I mean do the Final Fantasy V looking attack over and over, only in 3D. Combat is repetitive, and not in a fun way. The entire game is turn based. When you move, that’s one turn. If you don’t want to move, you can hit the R2 button and stay in the same place. This will recover HP. If you stand still, the monsters will also stand still. Just don’t stay in one place for too long because a Will o’ Wisp will materialize out of nowhere and end your life. Yeah, no joke…this guy is invulnerable to attacks and an automatic death sentence to Gil. In any case, if you’ve played Azure Dreams, then you will have a better understanding of the battle mechanics (without the Will o’ Wisps of course). It may sound complicated, but it’s not.

You won’t see a monster until you are a few squares in their range. When you are one (or two if a spear is equipped) squares away, you can hit the X button to attack. Simple right? Well, there is one catch. Monsters are surrounded by a red or blue glow. If you are in attacking range of a monster with a red glow, then it will attack first after you press the X button. If it’s blue, then you get the imitative. While the monsters aren’t too intelligent, they are annoying in that a monster with a red glow can get you by surprise if it decides to move in a diagonal direction. If it’s one that has a long range, it can get even more annoying because you’ll get attacked out of nowhere, or so it seems. That’s not all, because opening the menu up and equipping something or using an item also takes up a turn and a monster can attack you. Really, none of this would be so bad if many of the monsters early on weren’t able to inflict a negative status on you. Yes, these can be recovered with items, but this is a type of game where there are a bunch of worthless items and having the herb that gets rid of poison and confusion might be out of stock.

When you have had enough of the dungeon, you can use the Feather to get back to the town. However, this game is basically the same thing over and over. You can only travel so far until your levels are too low and your equipment bites that you are basically required to get better stuff. If not, then you will get a game over. You have to keep going through the same floors over and over, and fight the same foes. Monotony is something I can handle in RPGs, but there is one catch in Nightmare of Druaga that makes it…well…a nightmare.

When you look at it, none of this stuff sounds bad. Sure there is a bit of a challenge here or there, but a lot of action RPGs have this sort of challenge. This is when I cut you off and say, “Well…let’s talk about the game over.” When Gil’s HP drops to zero, he loses half of his money and ALL of his items not currently equipped. Yes, all. So if you have a beautifully forged sword with some awesome attributes and it’s not currently equipped, you can say good-bye to it. Now, whenever I get a game over in a game I typically start over or turn it off by hitting the reset button. Unfortunately, committing such a deed in Nightmare of Druaga will yield the same results of a game over, and then some! Since you auto-save in the dungeon’s beginning floor, you lose all your progress from town unless you save before hand. Ishtar the goddess will appear in front of you at the start screen and ask you a series of questions about how you shouldn’t mess with the fabrication of time and space and accept your destiny and blah blah blah. Ok, if this game was a bit more realistic I could understand this proposal, but LOOK AT IT! This is a Namco game with blue-haired heroes and what not. Ishtar, who are you fooling? But that’s not all. You see, when it comes to weapon creation, sometimes you don’t get what you want when you combine a few items together. If you get a crap result and hit the reset button…same thing happens. In the town, you have a save and quit feature. You can’t save and carry on with your journey: it’s just save and quit. If the game’s battle system wasn’t such a pain and the goddess Ishtar wasn’t giving you a hard time 24/7, this wouldn’t be such a bad thing.

Visually, the game is sub-par with what the PS2 is fully capable of. Most of the town’s people are blocky and look like they belong in Final Fantasy 7. Not that it’s a bad thing, but Namco can create better character designs. Heck, even the opening movie is less than impressive even by Playstation standards. The environments aren’t much to speak of either. You’ll see the same designs for the dungeons over and over because you’ll be trekking through them so often. It doesn’t necessarily become an eyesore, but it just makes the game that much more boring and annoying. Really, the same can be said about the sound and music. There is no voiced dialogue, instead you get little blips for EVERY LETTER TYPED that really got on my nerves. The music is about the same. It can be adjusted but it’s nothing to speak of, so I just kept it a lower volume.

The Nightmare of Druaga really had potential to be great and open the eyes of Namco newbies by showing them the history of Druaga. If the save features weren’t so obnoxious, the dungeons weren’t so repetitive and if there was more life given to the characters, we could’ve had a hit. Rent this game if you’re still the least bit interested. Everyone makes mistakes. Namco was never perfect, and hopefully they learned something from this. Tales of Legendia gets a USA release soon and hopefully it will more than make up for it.