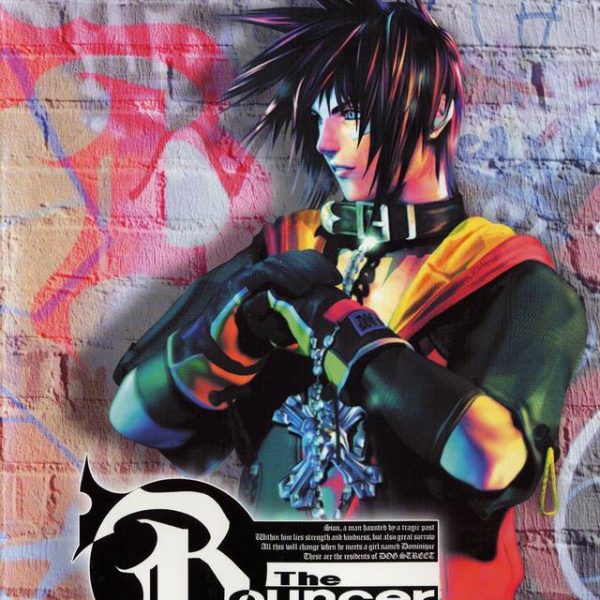 Before the world went head over heels for Final Fantasy X, Squaresoft displayed their PlayStation 2 talents with The Bouncer. As a huge fan of both the console it calls home and the makers of Final Fantasy, SaGa and other hit franchises, it wouldn’t be until many years after its release that I would have the chance to give this interesting game a chance. I use the term interesting because The Bouncer combines action, adventure, role-playing, and character customization into a story that does good job of balancing movies with game play. At times, The Bouncer will feel a bit basic, but overall it’s another solid game in the PlayStation 2’s library.

The Bouncer takes place in the futuristic city of Dog Street. The city’s largest corporation known as Mikado has just launched a new satellite initiative that promises new and efficient ways to utilize energy. Near Mikado’s headquarters is a dive bar called Fate. There, three bouncers rotate shifts to make sure no one starts any trouble. One of the bar’s regulars is an enigmatic but cheerful girl named Dominique Cross. When one of the bouncers, Sion Barzahd, returns from break to start his shift, special agents from Mikado crash through the bar’s windows and abduct Dominque. Sion and the other two bouncers, the manly and mysterious Volt Kreuger and the snappy and self-assured Kou Leifoh chase after the assailants. There’s going to be a lot revealed to these three in the span of one evening. Despite the story lasting only a few hours, The Bouncer has an action packed plot that keeps the momentum going from start to finish. The unique thing about The Bouncer’s story is that it can be viewed from any of the three characters. For instance, you can select Sion for one part and then switch to Volt in the next part. While the overall exposition doesn’t get changed, certain events and character interactions only occur if you properly select one of the three bouncers. The story itself has some interesting, albeit cheesy moments that make it worth the time to go through again and again. It’s not an epic, but fans of action movies and/or science fiction movies will find something enjoyable about it.

The Bouncer has a variety of modes to play, but the one that offers the most content is Story Mode. A scene will play out, you will select one of the three bouncers to control in a fight, you will participate in said fight and then the story will continue. Sometimes, you won’t have to fight enemies. Instead, you will need to find a key or escape from a building. Overall there is a good balance of watching and playing. The Bouncer is a 3D beat-em up game. You take control of your pre-selected character while the AI (usually) takes control of the other two. You then have to fight a variety of enemies using high attacks, middle attacks and low attacks. There are also jump attacks that are slightly more risky to land. You can also block, which is essential in the early stages of the game. It takes a while to get used to The Bouncer’s controls because of the way your character moves and targets an enemy. As you get closer to an enemy, you will enter a ready stance. However, if multiple enemies are around you, then things could get jumbled. Moving away from enemies lets you run. This weird moving, plus the need to carefully execute your attacks makes the first couple of fights tricky. However, as you get the hang of things and master each character’s fighting style, beating your foes senseless becomes enjoyable. When you kill an enemy, you are rewarded with Bouncer Points. These are used to increase your stats and learn new special moves. Sion, Volt and Kou can learn a variety of unique attacks and can have their life meter, attack power, and defense power grow. Acquiring enough Bouncer Points for all of the upgrades takes a long time; by the time the game ends for the first time you’ll be missing some upgrades.

Combat in The Bouncer can be fun, but there are times it feels too barebones. In the first fight, you’ll be in the bar. You’ll be surrounded by broken glass, barstools, empty bottles and other necessities in a bar fight. It would have been great if you could interact with these objects and use them. This will apply to the rest of the areas. One interesting that you can do is perform a Trinity Rush after one of the AI controlled bouncers gives a signal. While these are visually impressive, they don’t do as much damage as you would expect and they never work on bosses. Speaking of, bosses can be exceptionally difficulty since they usually come with backup and can perform their own special moves. Getting a game over means you have to return to your last save. Luckily, you can skip any movies you don’t want to watch again. Ultimately, The Bouncer’s combat is fun in smaller doses because it lacks the variety of other games in the genre. Still, watching stylish and masculine men air juggle enemies with their personal fighting styles has its perks.

Graphically, this one of the best looking PlayStation 2 games I have seen. The 3D characters move well and lack the jagged edges you would expect from an early PS2 title. Sion, Volt and Kou have over the top fashion styles that feel at home in the crazy world of Dog Street. The enemies you face are range from masked thugs to cyborgs with extendable arms. Sion and his coworkers will travel through subways, battle ships and mansions. Each area maintains the futuristic setting, so expect to see plenty of high tech gadgetry and flashing lights. The music in The Bouncer is hardly noticeable for the most part. This is a shame because it looks like the game would have a soundtrack reminiscent of classic action movies. The game is entirely voiced and can be in either English or Japanese. Both options sound great for the majority of the characters.

Story Mode can be played over and over again in order to witness new events and maximize your characters. Survival Mode is a grueling endurance test, and Battle Royale Mode lets you duke it out with a friend or the computer. New characters will be unlocked as you progress in all modes. When all is said and done, there is a hefty amount of content available in The Bouncer. Getting all of it is tedious and will feel longer than it actually is, but the content is there for those that wish to see and do it all. The Bouncer could have benefited from having more to its combat. But, with a variety of things to unlock and a narrative that can be seen from multiple perspectives, there is a little something for everyone. For Squaresoft’s PlayStation 2 introduction, The Bouncer was a good way to show their fans that they were capable creating something outside the RPG realm.

Overall, 7.5/10: The Bouncer takes some getting used to and often times feels basic. But, its dosage of heart and style make it worth a glance.