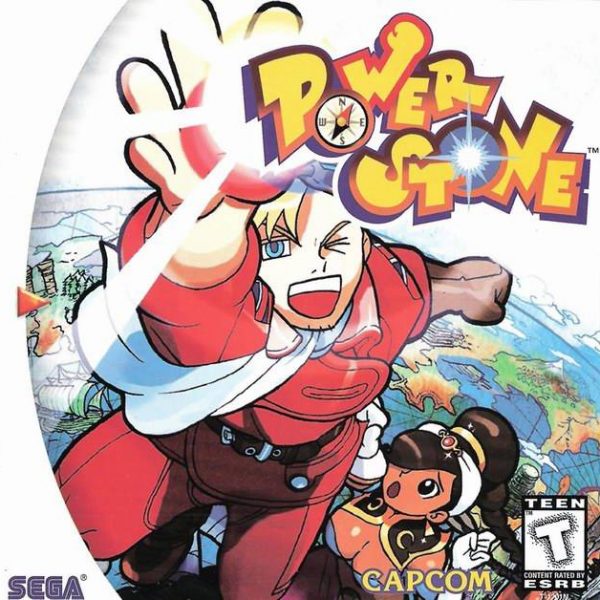 Video games in the fighting genre usually have solid staying power. It’s easy for me to go back to earlier iterations of Guilty Gear, Smash Brothers, and/or Samurai Showdown and still enjoy everything they offer. They might lack improvements and modifications in later installments, but they’re still fun to play for a few rounds. This applies to the 3D arena fighter, Power Stone. Looking at the game now, it’s hard to not compare it to its superior sequel. However, Power Stone is still a fun game. It’s also much more affordable than its sequel.

Welcome to the Power Stone world. Power Stone’s story takes place in the 19th century. It’s an era where treasure hunters, fortune seekers, common thieves and everyone in between is out to find fame and fortune across the globe. A few mighty adventurers have their sights set on the legendary Power Stones: mystical jewels that grant unspeakable power. It’s time for a worldwide voyage as ten adventurers battle one another in order to keep the Power Stones for themselves. Power Stone’s premise, while basic, does a good job of reflecting the game’s atmosphere. Due to the game’s colorful and fun style, it’s fitting that the story doesn’t take things too seriously. The characters shine brighter than the minimal narrative. While each character is fun, my personal favorite is Ayame, a kunoichi from Japan that elegantly kicks butt while fighting for the prosperity of her village.

The meat of Power Stone is in its gameplay. After selecting a character in single-player mode, you go through various arenas in an attempt to KO your opponent. Unlike your traditional 2D fighter, Power Stone takes place in full 3D. You move your character through varied stages that have platforms, devices, obstacles and gimmicks. You can perform a pre-set combo simply by pressing the same button repeatedly. Throughout the stage are weapons such as swords, bombs, guns and much more that you can pick up and use. Even boxes and crates that are part of the stage can be used as weapons. But, the fun doesn’t stop there. The most important item you can find are the Power Stones. Upon collecting three of them, your character will transform into a powered-up version of themselves with a completely new move set. Ayame, for example, transforms into a metallic, spiky-eared kunoichi that wields gigantic shurikens and pin needles. This powered-up form doesn’t last, nor does it improve your defense. However, with the ability to perform super-powerful attacks, some of which that cover the entire screen, victory in Power Stone is usually contingent on who can nab those precious gems first. The controls are responsive, there are multiple difficulty levels, and there are even a few secret characters that can get unlocked. Some VMU mini-games can be unlocked that don’t add much to the main campaign, but provide a fun distraction. Overall, Power Stone still plays exceptionally well.

The presentation in Power Stone fantastically shows what the Dreamcast is capable of doing. Flashy special effects? Check. Over the top move sets? Check. Whacky and colorful anime style? Check. It’s all there; showing that the Dreamcast and 3D presentation make a winning pair. All these years after the release of it, the game still looks magnificent. Power Stone’s music is as fun as the game. The tracks are groovy, filled with uptempo beats, jazzy instruments and lots of personality. Each stage has its unique theme that reflects the surroundings. The game is entirely voiced in Japanese, with the exception of the announcer who is voiced in English.

Power Stone’s most glaring flaw is its multiplayer option. The Dreamcast is capable of four controllers, but Power Stone’s multiplayer only allows two. While it’s fun to fight against a friend, Power Stone could have been so much more if it utilized all four slots. It won’t be until Power Stone 2 that you and three friends can sit on the couch and run amok against each other. However, for what it offers, Power Stone still holds up. It’s a fun game with solid controls, great characters, and fast-paced action. For those that still have a Dreamcast, I recommend checking out Power Stone.

Overall, 7/10: Whether you’re flying solo or up against a friend, Power Stone is a great 3D arena fighter that has an important slot in the Dreamcast library.