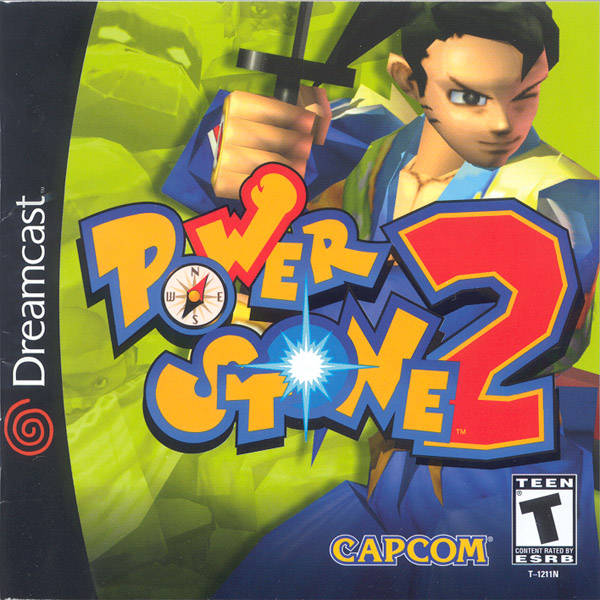 My biggest gripe with the Dreamcast port of the first Power Stone was the fact that only two people could play together. The Dreamcast is capable of housing four controllers, but the 3D arena fighter didn’t take advantage of that. As a result, an otherwise fun game felt limited. That issue was fixed in Power Stone 2. In fact, Power Stone 2 got the royal treatment in terms of new content. All of the stuff that worked so well in the first Power Stone is back. The amount of new content added to this fantastic sequel make it one of the best fighters on the console, and my choice for the top Dreamcast game of all time.

If I had to point out one major flaw that makes Power Stone 2 go from a perfect ten to slightly less, it’s the lack of a story. Fighting games aren’t played for their stories, but the one shown in the first Power Stone was fun. I figured they would have given some more narrative to the returning characters and some extra information outside the instruction manual for the new ones. Really, the story just amounts to the characters landing on a floating castle and looking for a way to escape. There are no character endings. After the last blow is dealt to the last boss, you put in your initials and get taken back to the title screen. It would have been nice to see what happens next.

With that complaint out of the way, we can focus on everything else that makes Power Stone 2 so special. The presentation was taken directly from the first game, along with some added flare and variety. There are more anime inspired characters that are equal parts comical and cool, as well as new environments for them to explore that have plenty of secrets. Watching four fighters lay into each other with nearly every sort of weapon imaginable, creative attacks that cover the entire screen, and/or over-the-top transformations never causes any sort of slow down. The Dreamcast’s graphical abilities were really pushed. The music features a new and old tracks that sound great. They fit each stage well, and at the same time, do a good job of reflecting the 19th century era. Other than the announcer, each character is voiced in Japanese.

Power Stone 2 has a variety of modes available. Arcade mode is standard fare where you select your character and move from stage to stage. A mid-boss and final boss stand in your way of completion. These fights play differently and require some patience. There is a bit of adjustment needed, but they are a fun way to take a break from a standard fight. Adventure mode allows you to fight three other CPU controlled characters in an attempt to get items for Mel’s Item Shop. For the most part, the standard difficulty setting in the non-versus modes is easy to deal with. The difficulty can be adjusted at the title screen.

Versus mode is where the real fun lies. You and three of your friends can duke it out across multi-layered and varied stages. Each stage is littered with items that you can use against each other. Examples include heavy machine guns, chairs, megaphones, Molotov cocktails, ice rods, and much more. The most important item to watch for are the Power Stones. Acquiring three of these will turn your character into a powerful alter-ego. However, they are still just as vulnerable in this form. One wrong move can literally knock the stones out of them. Whether you’re in human or altered form, the controls in Power Stone 2 are easy to learn and responsive. Each button performs a different function. Instead of worrying about memorizing inputs for special moves, you just need to skillfully know when to attack, when to evade and when to go for an item. Transformed characters have access to a new move-set. The more powerful moves drain their power meter quicker, which adds a nice level of strategy.

Playing any mode of Power Stone 2 is always a treat. No two fights are ever the same. Aside from new weapons and stages, there are new characters that join the Power Stone world. Even better, there are secret characters that you can unlock. Finally, you can mix and match items at Mel’s in order to discover new ones. The sheer amount of stuff to unlock at her shop is off the charts. You will be quite busy if you want to unlock everything Power Stone 2 has tucked away.

Like most fighting games, Power Stone 2 has unlimited replay value as long as you have people to play it with. The single player modes have their share of content, but the true fun in Power Stone 2 lies behind it’s four player versus mode. The chaos that ensues with four unique fighters running every which way never grows stale. This is one of the greatest games in the Dreamcast’s library. Aside from the lack of a story, one of the game’s biggest issues is its price. These days, it’s difficult to snag a copy of this game outside of overpriced sellers online. In a perfect world, Capcom would listen to the Power Stone fans and release this game as a digital title and allow online play ability. Until that day arrives, fans of fighting games of any sort should check into playing Power Stone 2. Do what you can to seek out this treasured title and enjoy arena fighting that’s as colorful as the character roster.

Overall, 9.5/10: Power Stone 2 takes everything that worked so well for the first game and gives it an extra boost to make it one of the best games on the Sega Dreamcast.