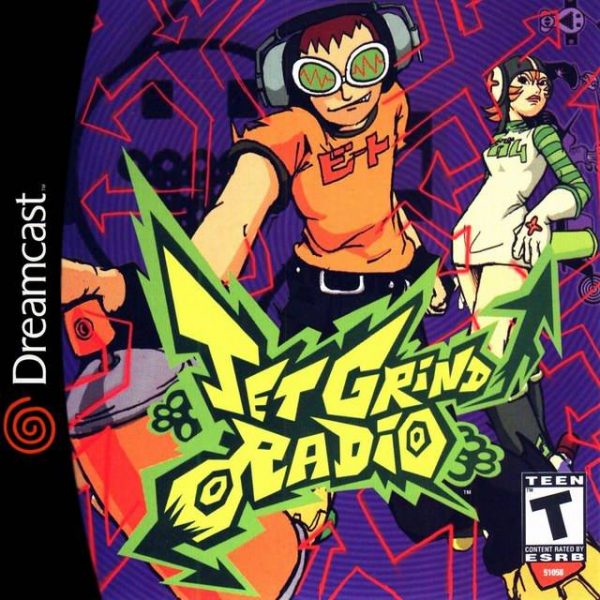 If there’s one thing I’d change about the gaming community, it’s their humility. Gamers tend to be a proud bunch that have a hard time admitting their faults. One of these faults is skill. If someone is bad at a game, there is no shame in saying so. Practice makes perfect. In this review, I want to discuss a game that I thoroughly enjoyed despite the fact that I am awful at it. I am talking about Jet Grind Radio for the Sega Dreamcast. I’ll come clean: I am terrible at this game, but that doesn’t stop me from having a darn good time with it.

Jet Grind Radio (known as Jet Set Radio in Japan and Europe) takes place in the city of Tokyo-to. This hidden yet happening city is home to The GGs, a group of super-fly teens that use Tokyo-to and all of its architecture as their skating rink. As they grind, jump and perform tricks throughout the city, The GGs use spray paint to mark their territory with creative tag designs. While The GGs just want to have a good time, rival gangs and scummy policemen are out to stop them. Players get to take control of a member of The GGs and claim Tokyo-to as their own while the DJ known only as Dr. K backs them up behind the scenes at his radio station.

The unique concept and setting shows nothing but creativity. Jet Grind Radio is a game unlike any other due to the modern day setting, the fantastic characters and the idea of creating graffiti. The idea of Jet Grind Radio is simple. You need to gain territory from rival gangs by spraying over their graffiti with your own. You can create your own graffiti or you can use one of the preset designs. As you skate around the various areas of Tokyo-to, you’ll have to watch out for cars, gang members, policemen and other obstacles.
At the start of a stage, players will select one of the members of The GGs and head into town. Since you are on inline skates, movement can be tricky if you don’t know what you’re doing. As you build up speed, you run the risk of running into objects and stopping your momentum. Luckily, the city is your playground. Grind on the rails, on top of buses, across billboards and under tunnels. Grab onto a car to gain speed up a hill. As you explore, you will find cans of spray paint. Most importantly, you will find parts of the city such as cars, signs and poster that need tagging. Tagging can be as simple as a button press or require you to follow prompts on the screen.

Jet Grind Radio is a lot of fun, but it’s also difficult. I’m not used to games like JGR that require you to do so much. After the tutorial stages, you are required to not only tag and perform tricks on stages designed as obstacle courses, but you are also required to avoid the police and rival gangs. You have a stamina meter that will deplete when you take damage. Once that runs out, the game is over. Yet, despite my struggles, I never got mad about not performing well. The game expects a lot of you the further you progress, but the rewards you unlock are worth it.

One reason I never put the game down was because Jet Grind Radio has one of the best presentations I’ve ever seen on any console from any era. Cel-shading can be a divisive art style, but Jet Grind Radio hit the nail on the head since it fits the games fun atmosphere perfectly. The GGs, the rival gangs and the rest of the denizens of Tokyo-to are a colorful, eclectic and eccentric bunch of characters. The music is also fantastic. It’s upbeat, funky, groovy and full of various genres of music to get your fingers ready to start tagging the hell out of Tokyo-to. A bunch of the tracks are from Hideki Naganuma, but others come from Rob Zombie, Jurassic 5, Cold and Richard Jacques. This is one unique soundtrack that does not disappoint.

Jet Grind Radio is great game, but it’s not without faults. My biggest problem with the game is the camera. Since the game emphasizes speed, having a camera follow you around and appropriately keep up is a necessity. The loading times tend to be on the longer side, too. Still, Jet Grind Radio is a title that overflows in creativity and fun. Usually, I play RPGs. These games take a slower approach to progression. Jet Grind Radio is the exact opposite. I might be one of the worst taggers this side of Tokyo-to, but I never stopped having a good time in this Dreamcast classic.