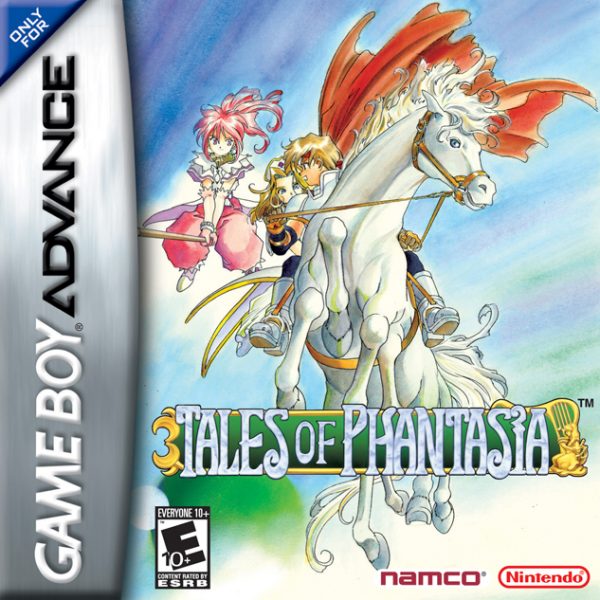 Aside from Final Fantasy IV, Tales of Phantasia seems to be the RPG that just doesn’t want to remain in the video game archives. “Oh Tales of Phantasia, how does Namco love thee? Let us count the ways.” There’s the original SNES version, the remake of it for the Playstation, the full-voiced edition on the PSP, the X version on Narikiri Dungeon’s remake, the iOS version and, finally, we have the version under review: the GBA version. That brings us to a total of six releases of Tales of Phantasia. An anime is also available, but we won’t count that. My dear readers, you are probably wondering why I’m finally getting around to playing the only version of the game that was legally released in the states after just finishing Tales of Xillia. Actually, you’re probably not wondering that. I’ll just admit that I was too stubborn to give this version a chance after being spoiled by the FVE version of the game for the PSP. Overall, the GBA version of Tales of Phantasia isn’t as polished as others, but at least I can understand it without a translation guide.

Before the game truly begins, we witness the final events of an epic battle. After it ends, we are taken to the quiet village of Totus. Here, our hero Cress Alvain is getting ready to go on a hunting trip in the nearby woods with his best friend, Chester Barcklight. Things seem to be going well for the duo after snagging some delicious boar’s meat, but all of a sudden, the alarm bell in their town rings! Cress and Chester run back to Totus, only to see it completely destroyed! What happened? Cress ventures off to exact revenge on those who demolished his village. What Cress does not know is that he will begin a journey through time and space with the fate of their world hanging in the balance.

If this is your first time playing Tales of Phantasia, you are in for a treat. The story can be a bit predictable, and the idea of time travel leaves room for a million paradoxical plot holes. However, the story was enjoyable from beginning to end. If this is not your first time playing Tales of Phantasia, you will find that skits are not to be found in this version. Despite this fact, each character has plenty of opportunity to shine. Truly, the characters involved in the story are what make ToP a classic. They may fit certain molds at first glance, but as you get to know them, they end up becoming well developed. The best thing about the story? It’s in English! Like, I can’t even begin to describe how big of a deal this is to those new to the series. This means you don’t have to have a translation guide in front of you or dedicate decades of studying Japanese in order to follow along the adventure.

Progressing through this adventure requires you to do things found in most RPGs. In a town, you can shop, talk to people, and learn more about the tasks at hand. Sometimes, certain people will give you items or vital pieces of information that open up one of many side-quests. Cress runs fast, so getting around town is relatively easy. When you leave a town, you are on the world map. One rather lame aspect of the world map is that in the beginning of the game, there is too much travel from Point A to Point B, and back to Point A. It gets redundant, especially considering you have to travel to most places via ship. Later in the game, you’ll get the power of flight at your disposal. This makes traveling through the world map much, much easier. In a dungeon, you’ll be fighting plenty of monsters. The random encounter rate isn’t as high as other versions, thankfully. As much as I enjoyed the battle system, I found myself cursing the fact that after about eight steps, I’d be fighting again. What is worse is that the dungeons later in the game are long. If you lack the items and resources to survive, you might as well turn off your GBA.

When it is time fight, you get treated to the classic Tales battle system. Your characters and your foes are on a 2D plane in which you fight in real-time, utilizing the linear-motion battle system (LMBS). You usually take control of Cress and the AI controls the remaining three party members. You can set how they perform from the main menu. Cress can equip various weapons, and has a number of attacks at his disposal. The rest of the characters fight with their own style. To some, the differences between the characters will make finding the perfect party fun. To others, they may dislike the lack of customization for outfitting your characters. Regardless, the battles aren’t as polished as they are in other versions. Cress can perform two attacks instead of one, and his skills can be chained together. You can assign shortcuts for other party members’ skills, and the AI is more reliable. However, there are a few kinks. After performing his attacks, Cress will start to run back to his initial position. It was not problematic, but it did get annoying. Come on Cress, the enemy is knocked out! Keep slashing him! There is no Manual mode, and for some reason your team members insist on fighting when you attempt to run away. The biggest issue is that battles can slow down when things get too hectic. For a fast-paced battle system, Tales of Phantasia shouldn’t be slowing down. Despite these flaws, battles were enjoyable.

The look was enjoyable, too. I realize that this GBA edition isn’t as shiny as other editions, but the game still has plenty of color and detail to offer. Character sprites look better than they did on the SNES, but they still have some pixels that need to be rounded. Battles look much better than they did on the SNES, but again, nothing like they did on other versions. As usual, anime emoticons help express how they are feeling outside of battle. Spells and skills look fine, too. My biggest upset is that the opening animation is not available on the GBA. This is a shame because I know it’s possible to make stuff like that happen. Remember that awful Kingdom Hearts title for the GBA? It had a gorgeous, full 3D opening movie. I feel that a 2D anime movie would be possible. But, what do I know? I’m not a programmer.

Which brings me to one of the more displeasing aspects of the game: the sound. Namely, the voices. My Dhaos, the voices. They are awful and you cannot turn them off. Thus, I want to point this out to all programmers in the making: gives us an option to turn off voices. Seriously, do it. That aside, the music has been upgraded to handle the GBA’s sound system. The tracks were not remixed, just upgraded. To me, this was perfectly fine because I enjoyed nearly all of the tracks.

The first time I ever played Tales of Phantasia, it took me about 50 hours to complete. Having previous knowledge of the game and it’s nuances, the GBA version took me about 30 hours. However, there are tons of things to do before you strike down the final boss. Besides endless side-quests, you can cook, go to a battle arena, and earn titles for your characters. All in all, this is a fair representation of Tales of Phantasia. My biggest upset with the game is not due to the battles, the story, or the graphics. It is due to Namco’s genius decision to localize this version. Also, those voices. They will make you cringe the first couple of times. But, hey, at least you can legally play this version without having to emulate or rely on a 10 years in the making patch. Seriously. 10 years?! That all said, Tales of Phantasia is a classic. While the GBA isn’t able to fully capture it’s magic, it’s still the easiest way to play it in a language you can understand.