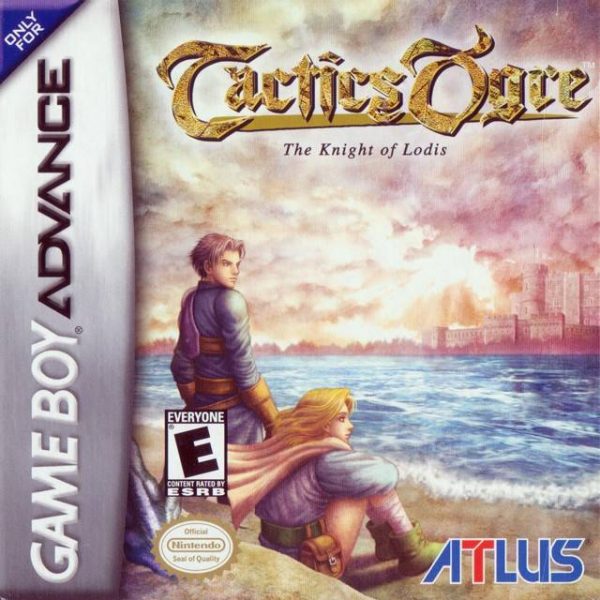 Portable consoles are great for games that don’t require the player to put too much thought into achieving victory. Of course, there are times when even the most deep and thought-provoking titles can be found on handhelds. This is the case for Tactics Ogre: The Knights of Lodis. Despite being released years after the beginnings of the Ogre Battle/Tactics Ogre franchise, this was the first game in the series I played. Personally, I would recommend folks to check out this game before deciding whether or not to take the plunge into this historic series. It is simple enough in design to welcome newcomers, yet it features a solid story. Best of all, it will give people an idea of what to expect in other titles. However, Knights of Lodis does have some issues.

One of these issues is audio. Due to the nature of the Game Boy Advance, audio quality is already marked for death no matter the game. Despite some great work by Iwata and Sakimoto, gamers will be inclined to mute the system or turn on their mp3 player. The only good thing about the sound is that technology these days has the capacity to remix songs with a more modern sound. Some day, my dear readers. Some day.

Anyway, let’s focus on the story. The game takes place before the events of Tactics Ogre: Let Us Cling Together, which is the game that most people will recommend newcomers to check out. In the country of Ovis, the citizens are relentlessly oppressed and abused by the knights of the Lodis Empire. Naive to the goings on in his faction, our hero Alphonse Loeher is sent to Ovis on a mission. Unfortunately, he gets separated from his party and ends up meeting two women of Ovis after finding shelter. Slowly, Alphonse begins to question the motives of the knights of Lodis. Politics and mysticism will clash in the young warrior’s world as he unravels a plot full of choices and multiple endings. Solid writing and characters make up the world of The Knights of Lodis, but some scenarios have a tendency to outstay their welcome due to preachy wording and boring sub-events. The worst part of the story is that you have to get through the game in under 25 hours in order to view the best ending. This is just one of the many conditions necessary. SRPGs are a genre that should not be rushed, but to get the most fulfillment from your quest in The Knights of Lodis, you would have to.

The majority of your time with The Knights of Lodis will be getting your battle party set up to your liking and “fighting it out” in massive battles. A huge variety of classes, species and statistics let you build a party that fits your style. You can recruit other humans, as well as dragons, krakens, and even the undead. Your human characters can acquire a variety of weapons and armor. A new feature to the series is the ability to collect medals. By fulfilling certain conditions, your characters will be rewarded with medals that allow class changes, grant status boosts or just look nice. Unfortunately, some medals have negative effects and once you get one, you’re stuck with it. The medals offer incentive to experiment with different actions in combat.

The actual combat in The Knights of Lodis is typical stuff for the genre. The game follows the player phase/enemy phase formula on a giant grid setting. During your turn, you will move your characters and perform actions. You can use skills, spells and items and, of course, perform regular attacks. Certain weapons allow teammates to attack more than one square or attack from afar. Both sides exchange blows until one is victorious. Like I said: typical. The Knights of Lodis is as standard as it gets when it comes to SRPGs, which is both a good thing and a bad thing. People who enjoy simpler SRPGs will feel right at home. However, those looking for something with more flare will be let down. Even with a variety of class changes and medals to collect, there may not be enough meat to satisfy those looking for a deep game. Near the end of the campaign, you can control an impressive 30 characters, but this can make battles last longer than expected. Overall, this is an SRPG that you have likely seen before only with a different name and story.

The same can be said about the game’s look. The Knights of Lodis looks great, yet comfortable, on the GBA screen. In other words, the sprites and environments look like those you’d find in other SRPGs. That said, there are some impressive skills and spells to witness. With a huge variety of classes and monsters, the best part of the graphics comes with the huge variety of different looking sprites.

As I mentioned previously, this game will require you to finish everything and make the right choices in under 25 hours to see the best ending. However, first time players will likely finish the game in 40 hours if they play it without a guide. SRPGs are long, so it’s hard to say whether or not most people will go back for a second round even if they don’t witness the best ending. Tactics Ogre: The Knights of Lodis is a good game for introducing gamers to the world of Ogre Battle/Tactics Ogre. With simple game play but a captivating plot, the game will give folks an idea of what to expect with the rest of the series. However, some of the game’s inherent issues could dissuade those from trying it. Fight it out if you dare and enjoy one of the more impressive and hefty games available for the Game Boy Advance.