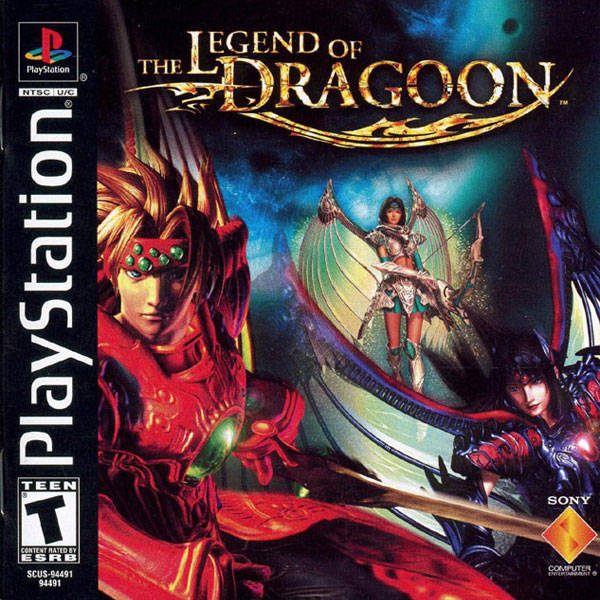 Author’s Note: This review was originally published on July 23rd, 2008. Like other reviews of the time, this one features “witty” taglines that highlight each section. I remember writing this review during a slow day at a job.

The Legend of Dragoon was a game purchased on a whim. It was during a time when I needed an RPG that had a different flavor to it. While searching through the endless library of PlayStation RPGs, LoD caught my eye. After hearing mixed opinion on it, as well as hearing all of the Final Fantasy vs.The Legend of Dragoon debates, I decided to give the game a go. What I got was a slightly above average game with a few surprises, both good and bad.

Dart Into Action.
The Legend of Dragoon stars a young swordsman named Dart. He and his friend/lover Shana reside in a small village. One day, Shana is kidnapped and the town is burned to the ground. Dart is on the scene. However, Dart and his friends all hold a powerful secret, one that could decide the fate of the entire world.

Truth be told, there is not much more to the story than what I just typed. The Legend of Dragoon has a familiar story. While the game expands onto four discs, you will see that the adventure of Dart and his friends is a short, predictable flop. Well, calling it a flop would be unfair because there are a few fun moments in the tale, but as a whole it is lacking in excitement because you have seen this story so many times before. Furthermore, the game suffers from extreme translation errors. Even the characters and their stereotypes are suffering. While some of the characters you meet, such as Rose and Haschel, have a stereotype I appreciate, the rest are bland and uninspiring. For a main character, Dart lacks the charisma to make him likable.

Follow the Path.
Progressing through the short story requires you to take a linear approach. While there are a couple of side quests for you, The Legend of Dragoon is a very linear game. On the world map, you will be shown the path that you must follow. Literally, you have a dotted line follow. After the event is complete in the destination, it is on to another area. For the time, the linearity was welcoming. Looking back on it, I would have preferred less of a hand-hold when it came to moving forward. I know where I am supposed to go next, but why am I unable to explore this hidden area? Regardless of the location you must visit next, the place will be a town or a dungeon. The towns in Legend of Dragoon are what you would expect. There is shopping to do and people to see. In the end, it is standard RPG stuff when it comes to the cities.

Add On Dungeons.
In the dungeons, it also standard RPG stuff. Well, for the most part. Dungeons are littered with random encounters, and when you enter one you have to prepare yourself for the Additional System. With the exception of two characters, each member of your team can perform a preset combo on an enemy instead of the standard RPG attack. When you pick your enemy to attack, a square will appear in front of it. A larger square will zoom in towards the smaller square. When the large square enters the small square and is the same size, you need to hit the X button. If you continue to do this successfully, you will be able to rack up plenty of hits and finish with a deadly blow. If you fail, you will give less damage. The more you use a combo, the more powerful it gets. This system was an interesting concept, but it was also a frustrating one. Finding the rhythm for the more powerful moves was difficult. The more I messed up, the more frustrating random encounters became. On the other hand, when you do find that rhythm, you will enjoy racking up the damage against the enemies with each attack.

The more successful attacks you land, the more points you get for a bar at the bottom of your character’s portrait. When this reaches a certain level, and assuming you are at a certain point in the story, you can transform your character into a dragoon. As a dragoon, your character has access to powerful (but slowly animated) magic, and a new type of aerial attack. Instead of dealing with the squares, you have to spin a meter. By hitting the X button at the 12 o’ clock position on the meter, you will be able to do more damage.

Other than the combo attacks and dragoon transformations, you can defend to recover HP, use items, or attempt to run away. The turn-based battle system had some interesting concepts. At times, it worked and other times it did not work. Mastering the combos requires a good sense of rhythm, and without it you can find yourself only able to pull off the less impressive and less powerful combos. However, my final opinion on it is that the system was good. It got me annoyed, but in the end it was unique and I give Sony credit for trying something new.

A Dragoon Song.
One thing I did like about Legend of Dragoon was the music. While the voice acting was sub-par, most of the songs were a pleasure. This is especially true for the battle tracks. Unfortunately, in the battles you have to put up with the characters shouting and grunting. Whether they are announcing the name of their attack or charging up their energy for a powerful spell, often times they sound rather ridiculous. The FMVs are fully voiced, but again, the acting could use a bit of improvement.

Shining Dragoon.
Another thing I did enjoy about Legend of Dragoon was the graphic style. Despite my favoring of 2D graphics, I found the pre-rendered environments and 3D characters looking great. In a town or a dungeon, they look good. There are many things to interact with, and plenty of locals to see and your characters are expressive with what they say during the story sequences. In battle, characters look more realistic and detailed. While the spell animations take too long after the fifth time viewing it, they have an overall good look to them. After certain battles, story events will play out with the battle graphics, which adds an even stronger sense of realism. The highlight of the graphics comes with the stunning FMVs that are too rare for their own good. You will see that the PSX got pushed to the limit when it came to these little beauties.

Entertaining. Enraging. Engaging. Encouraging.
The Legend of Dragoon is short, despite the fact that it runs on four discs. The battle system can enrage you at times, and the script often times suffers with an unrealistic translation. Three years in the making, and you would think that some grammar and spelling errors would be caught. Despite these facts, it was an entertaining adventure. There are various characters, plenty of combos, and some gorgeous visuals. If anything, Legend of Dragoon gives players an idea of what Sony can do with the RPG genre. Sure, they made some mistakes, but hopefully they will learn from them and deliver a new game without the errors.